Please ensure Javascript is enabled for purposes of website accessibility
Log In Help Join The Motley Fool
Free Article Join Over 1 Million Premium Members And Get More In-Depth Stock Guidance and Research
By Eric Volkman - Dec 19, 2017 at 8:57AM

JPMorgan Chase is a stock market darling; Wells Fargo, not so much. But does that necessarily make it a better investment right now?

In the banking world, you don't get much bigger than Wells Fargo (WFC 1.92%) and JPMorgan Chase (JPM 1.28%). These sprawling financials are exactly half of the "big four" group of U.S. banks, the other 50% being Bank of America and Citigroup.

Both Wells Fargo and JPMorgan Chase are sprawling financials that are active in almost every aspect of banking and finance. But of course, not all things in this world are created equal, and one of those companies provides the superior bang for our investing buck. Here's which one I think it is.

A tale of two banks

Although the distinctions between the pair have blurred somewhat over the years, we can still point out a few differences. California-based Wells Fargo is a domestic operator with a particularly strong presence in the West and has a very large mortgage banking operation. In fact, it's by far the top mortgage lender in the country.

New York-based but internationally active, JPMorgan Chase has traditionally been strong in the up-and-down world of investment banking. That's not to say it lacks a presence elsewhere in the U.S., though, or isn't active in other banking segments. Its 2008 buyout of Washington Mutual beefed up its Western operations, and it's No. 2 on the market, albeit distantly, in mortgages.

At the moment, the U.S. economy continues to motor along. Interest rates, although rising steadily, are still low enough for companies and individuals to take out loans. These factors are lifting the results of most banks; most of the significant American ones did quite well in this year's calendar Q3.

But not all. Wells Fargo saw a slight (2%) year-over-year decline in revenue, and a much steeper (18%) fall in net profit, missing the average analyst estimates for both line items. It's troubling that the bank stumbled while its peers jumped ahead.

Some have attributed this performance to the ever-lengthening series of scandals that have plagued the company since last year. It's hard to say for sure how these mistakes have affected results; regardless, they surely haven't helped.

JPMorgan Chase, by contrast, has managed to stay more or less clean across that stretch of time. It seems to be too busy taking advantage of the favorable environment to get embroiled in a major scandal. In its own Q3, the bank saw its revenue increase by 3% and its net profit rise 7% -- to $25 billion and $6.7 billion, respectively. Deposits and total loans also saw decent growth, by a respective 5% and 3%. 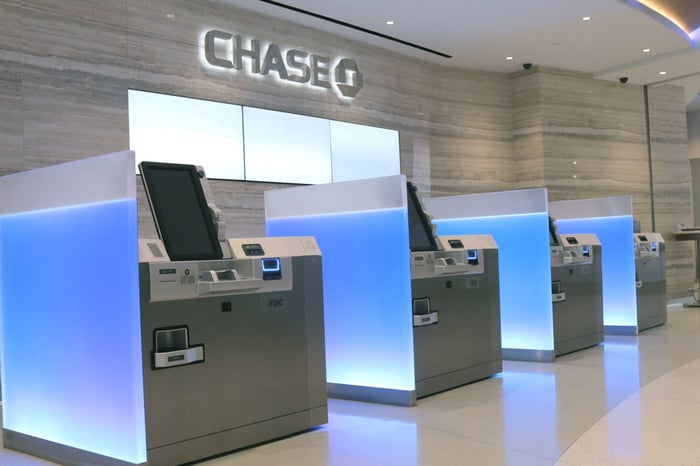 Not surprisingly given these results, JPMorgan Chase's stock has been a favorite of investors recently, while Wells Fargo has lagged behind. The former's shares are up 23% since the beginning of the year, well above the latter's 9%.

Recent fundamentals and stock price don't tell the whole story, of course. Let's look at some of the valuations, and the expectations for future periods:

The two figures that show a significant difference between the two banks are the efficiency ratio, and the average analyst projection for one-year forward earnings growth. Both clearly favor JPMorgan Chase, while the remaining numbers are more or less in the same ballpark.

JPMorgan Chase isn't a winner on this alone. But I'd say its good recent performance -- anticipated to continue on those favorable macroeconomic factors -- and the comparatively smooth way it's been managed both put it into the winner's circle. Wells Fargo is still a very profitable enterprise; don't get me wrong. But those revenue and profit declines are a concern, as is management's apparent inability to stem the flow of scandal.

So for this contest, JPMorgan Chase is the clear victor for me.