With a new year upon us, the economy performing well, and a big corporate tax rate in place, now sure feels like a great time to be invested. And after a rough couple of years, energy stocks could make for some of the best investments.

With an eye on trying to identify timely opportunities, we asked three of our contributing investors who follow the energy industry closely to make the case for an energy stock to buy this month. The stocks they say make the cut include oil refiner Marathon Petroleum Corp (NYSE:MPC), independent oil and gas producer Apache Corporation (NYSE:APA), and solar panel technology leader SunPower Corporation (NASDAQ:SPWR).

Keep reading to learn why our experts think now's the right time to buy these stocks. 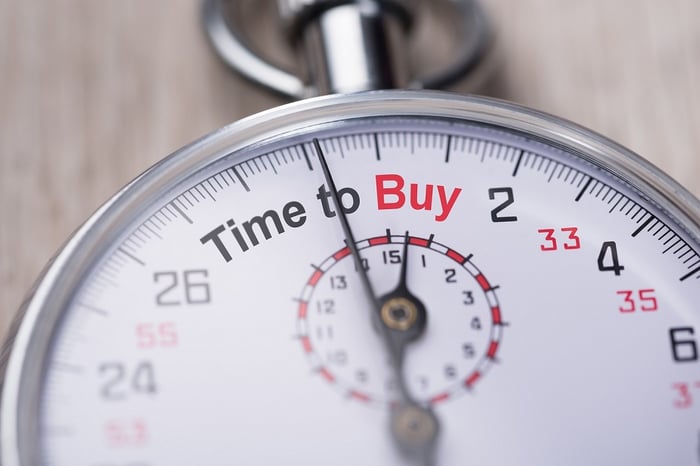 Tyler Crowe (Marathon Petroleum): The past two years have not been kind to refining companies, and Marathon Petroleum was no exception. From 2015 to the middle of 20117. Marathon's bottom line took it on the chin. Recently, though, there have been a few changes that should immensely benefit Marathon coming in 2018: Wider refining margins and lower income taxes.

The price of a gallon of gasoline or diesel has historically been set by the most expensive barrel of oil needed to meet demand. This is known as the marginal cost barrel. Refiners can reap huge profits if they can source crude that's significantly cheaper than the marginal cost barrel. The difference in price between domestic crudes and international crudes was minuscule, which put pressure on margins.

That dynamic has changed a bit lately. Oil production outside the U.S. has declined, and domestic producers keep growing output. As a result, the price between these two crudes has widened significantly. This should lead to much higher margins for Marathon. 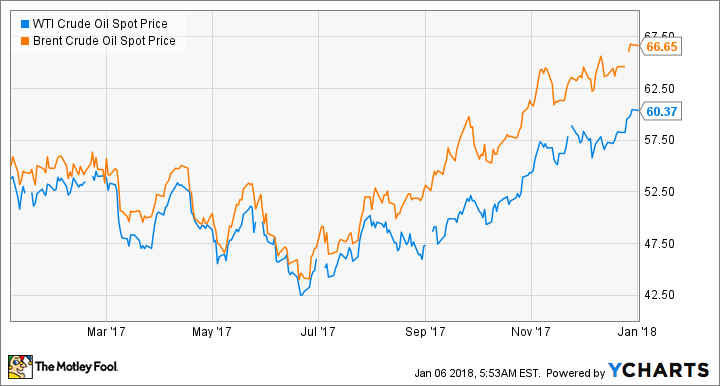 Marathon was already a rather shareholder-friendly business that pays a fast-growing dividend and buys back tons of stock. With higher margins and lots of extra cash from lower taxes lying around, Marathon will likely accelerate its buybacks and dividends. Shares may look a little pricey today at 22 times earnings, but this market looks to be right in Marathon's wheelhouse.

John Bromels (Apache Corporation): Like a knocked-down boxer woozily getting to his feet, independent oil and gas exploration and production companies are starting to rise as the price of oil improves. Some have already seen large gains, but others are still in the early stages of recovery -- like my pick for this month's top energy stock, Apache Corporation.

The spot price of West Texas Intermediate Crude broke $60 a barrel earlier this month, a level it hasn't seen since June 2015. That should be very good news for Apache, which turned a profit in its third quarter of 2017 with WTI Crude below $50 a barrel for most of the quarter. Add to that the fact that production at Apache's new Alpine High play in West Texas should finally begin in earnest this quarter, and the one-two punch of higher production plus better margins should pay off for Apache's investors.

But I wouldn't wait too long to jump on the Apache bandwagon. I think the stock is underpriced below $50 a share, and it's spent much of the past few months below $42 a share. The market is finally catching on, though, and Apache's stock is moving up fast. If you're going to buy, now's the time to do it.

A bright future for this solar leader

Jason Hall (SunPower Corporation): While shares of its biggest U.S. competitor, First Solar, have more than doubled over the past year, SunPower's stock has gone up "only" about 21%, slightly underperforming the S&P 500 in total returns over that period. This performance comes down to concerns that SunPower's Asian-made panels could be subject to import duties in the important U.S. market, as well as competitive pressures across the industry as technology continues to get better and cheaper.

But SunPower isn't standing still. While it will continue to leverage its X-Series panels in residential and commercial applications where the higher efficiency can be worth the premium cost, the company's P-19 series of lower-efficiency, lower-cost panels is aimed squarely at taking market share and growing sales of utility-scale and power plant systems. The success of the P-series panel is so crucial, my colleague Travis Hoium calls the P-Series SunPower's most important product in 2018.

Yet even with the challenges in place today, I think SunPower's future is bright. Tariffs could harm its sales in the U.S. in the short term, but the global solar market is massive and growing. SunPower should be able to both transition its focus away from the U.S. for now, while also building up its U.S. manufacturing capacity to quickly re-establish itself at home. Looking past the short-term worries, SunPower should be one of the big winners as renewable-energy growth accelerates over the next decade.