The drone revolution has begun!

Drones, or unmanned aerial vehicles (UAVs), aren't new, as the military has used them for many years. Recently, however, their applications have been expanding because of decreasing costs and technological advances in things such as artificial intelligence (AI) computing power. Civil uses for drones are expected to explode once regulations, particularly in the United States, loosen up.

Drones have begun to transform such tasks as industrial inspections and crop monitoring, and they appear to be on the cusp of revolutionizing industries ranging from energy to e-commerce. Research firm Gartner estimates that the global civil drone market grew about 34% to $6 billion in 2017 and will nearly double to $11.2 billion by 2020. The Association for Unmanned Vehicle Systems International (AUVSI) projects that the economic impact to the U.S. from civil drones could be up to $82 billion by 2025.

There are two main ways to play the drone trend: You can invest in companies that make drones or produce platforms/components for them, with AeroVironment (NASDAQ:AVAV) and NVIDIA (NASDAQ:NVDA) falling into these respective categories. You can also bet on companies that are poised to benefit from using drones to improve their products and services, such as Amazon.com (NASDAQ:AMZN). Here's an overview of some top companies involved in the drone space and their stocks.

Action-camera maker GoPro isn't on the chart because it announced in January that it was shuttering its Karma drone division. No matter, as this issue-beset company would not be making my cut.

NVIDIA and Amazon are the two top ways to invest in this theme, in my opinion. NVIDIA is already making money in the drone market -- though we don't know how much -- while Amazon is not. There's much to like about AeroVironment, but the drone and electric-vehicle-charger manufacturer's financial results are subject to considerable uncertainty stemming from its dependence on government spending. The company's entrance into the commercial drone market should help lessen this uncertainty over the time. There's also a good amount to like about Intel, but NVIDIA is the better chip play, in my view.

NVIDIA's AI platform for powering driverless vehicles gets a lot of press, while it seems to fly under many investors' radars that the graphics processing unit (GPU) specialist also has such a platform geared to drones. NVIDIA's AI products all use the company's GPU-based approach to deep learning, a burgeoning category of AI in which machines are trained to make inferences from data like humans do.

Last March, NVIDIA began shipping Jetson TX2, which is a credit card-sized platform that brings AI inferencing out of the data center and into "edge devices" -- such as drones and other robotic forms, and cameras for smart cities. This product is the company's third-generation of the Jetson platform, which was initially launched in 2014. It reportedly provides twice the performance of its predecessor, released less than a year-and-half prior, enabling higher accuracy and faster response time for tasks such as image classification, navigation, and speech recognition.

In September, NVIDIA announced two significant wins in the drone market: Chinese online retailing giant JD.com is using Jetson to power its drone and ground robot delivery initiatives, which are in the pilot stages, and Avitas, a General Electric company, is using NVIDIA's AI tech to provide the brains for its drones and other robots used in industrial inspections. JD.com is part-owned by Walmart, which might provide NVIDIA with an entree to working with the world's largest retailer on its drone delivery initiative. Likewise, the Avitas collaboration could lead to more business from GE.

In September, the company revealed another victory in the drone space: monitoring Ontario, Canada's 400-series highways for compliance with carpooling regulations. NVIDIA's partners on this project are IBM, the University of Toronto, and privately held The Sky Guys, Canada's leader in drone solutions and technology. While this is a relatively small project, it shows the potential for drones to be used in law enforcement applications.

Wall Street expects NVIDIA's earnings growth to slow significantly -- to an average of 9.5% per year over the next five years. But investors should pay little attention to this estimate, as analysts have consistently and significantly been underestimating NVIDIA for some time. 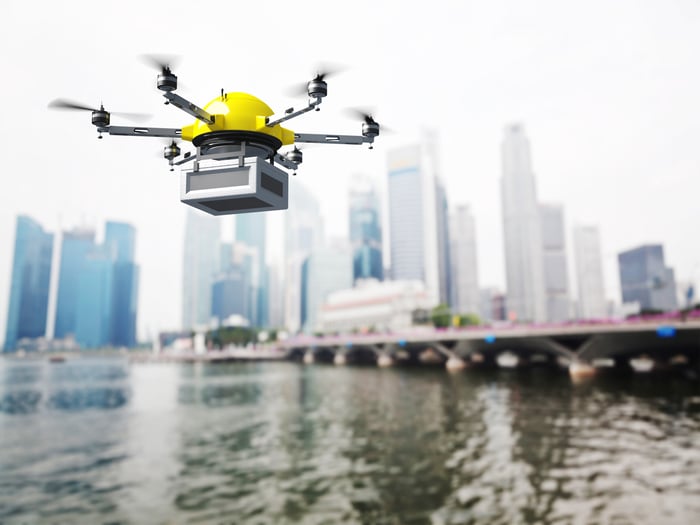 Amazon: A leader in developing drones for package deliveries

In December 2013, e-commerce and cloud-computing-service behemoth Amazon announced it planned to use autonomous drones to deliver packages weighing up to five pounds within 30 minutes of select customers -- those located within 10 miles of one of its fulfillment centers -- placing an order on its website. At the time, many folks wrote off CEO Jeff Bezos' proclamation as pie-in-the-sky dreams or a publicity stunt.

Fast forward more than four years and companies big -- including Alphabet's Google, Walmart, and JD.com -- and small have joined Amazon in testing drones for delivering packages. With the basic technology here and promising test results rolling in, it looks like just a matter of time before it will be relatively common to see drones zipping across the skies in route to bringing goodies to select consumers.

This should prove true, at least, in certain parts of the world. Some in the aviation industry are skeptical about autonomous delivery drones ever getting the green light to be used for commercial deliveries in the U.S. Currently, the Federal Aviation Adminstration's regulations pertaining to drones are more stringent than in certain other countries, which is why Amazon is conducting its testing program in the U.K.

Amazon stands to benefit big if it's able to eventually use drones for "last mile" delivery, or transport from its fulfillment centers to final destinations. The company has an expansive network of fulfillment centers in the U.S., putting a sizable portion of the country's population within a 10-mile radius of a center. Combine this fact with the statistic Bezos has shared that about 86% of the packages the company delivers from its warehouses weight five pounds or less, and the potential for drones to replace more costly humans for many deliveries becomes obvious.

Lower delivery costs -- which should increase profits -- aren't the only potential benefit. If consumers can receive many of their packages within a half-hour of placing an order, there's little doubt that more people will be ordering more goods online. So Amazon should see a nice boost to its revenue, as well as to its bottom line.

Even if Amazon's drone delivery plans never take off, the company's increasing dominance of the U.S. e-commerce market along with its super-profitable cloud-computing business and continuous expansion into new markets makes the company's stock an attractive long-term holding.