The Jaguar I-Pace, as it's called, is a long-range battery-electric SUV. Depending on Jaguar's launch schedule, it could become the first direct competitor to Tesla's Model X to emerge from a global automaker.

That means it has the potential to be a very big deal. Here's what Jaguar has told us about it so far. The I-Pace Concept was a preview of an all-electric Jaguar. The production version will be revealed on Thursday. Image source: Jaguar Land Rover.

What Jaguar said about the I-Pace back in 2016

Jaguar, which is owned by India's Tata Motors (NYSE:TTM), first showed the I-Pace in "concept" (show car) form in November 2016, at the Los Angeles International Auto Show. While some concept cars are purely flights of fancy, intended to show the future direction of a brand, others are close previews of vehicles that automakers actually intend to produce.

The I-Pace Concept clearly fell into the latter category. Designed from the ground up as an electric vehicle by Jaguar's highly regarded design chief, Ian Callum, the I-Pace aims to combine SUV practicality with sports-car capabilities. In person, it's kind of in-between: It's definitely tall for a sports sedan, but it's low-slung as SUVs go. It's somewhat similar to the Model X, but it's also different: It's something new.

At the time, Jaguar officials said that the upcoming production version of the I-Pace will have a dual-motor drivetrain powered by a 90 kilowatt-hour (kWh) battery pack, good for something over 220 miles of range on the U.S. Environmental Protection Agency's test cycle.

That dual-motor system was said to make 400 horsepower and 516 pound-feet of torque, enough to get the I-Pace from zero to 60 miles per hour in "around four seconds."

Jaguar also said that the I-Pace will support the DC Fast charging standard, which should enable Tesla Supercharger-like recharging times. At the time (2016, remember), Jaguar said that a 50-kilowatt DC Fast charger could recharge the I-Pace's battery to 80% in 90 minutes and to 100% in just over two hours. Will the production I-Pace exceed those 2016 expectations?

Since it first revealed the I-Pace, Jaguar has talked up the electric SUV's capabilities in general terms. It released photos of a racing version, set to launch late this year, and of the I-Pace undergoing winter-weather testing in Arctic conditions in the far north of Sweden. Jaguar said this week that its I-Pace test fleet, which includes more than 200 prototypes, has completed over 1.5 million miles of testing over varied terrain and in extreme hot and cold temperatures.

Jaguar has also updated its claimed recharging time for the I-Pace. It said in January that the I-Pace will be capable of recharging from 0 to 80% in less than 45 minutes with a 100-kilowatt DC Fast charger. It's no surprise that the I-Pace's recharging time has improved, given that charging-network companies like ChargePoint have begun to roll out ultra-fast DC chargers rated for up to 500 kilowatts.

We also now know that the I-Pace will be built in Austria, at Magna International's (NYSE:MGA) Magna Steyr contract-manufacturing factory. (But we don't yet know how many I-Paces that factory can build in a year.)

And while Jaguar hasn't explicitly said so, also seems likely that at least some versions of the production I-Pace will outperform the range and acceleration estimates that Jaguar gave back in 2016. 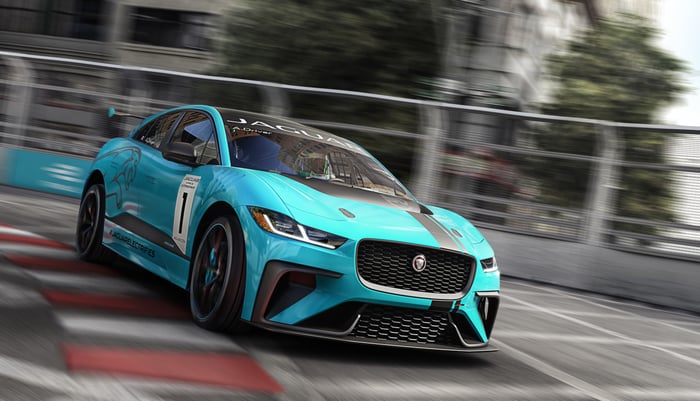 Jaguar plans to take the I-Pace to at least one place that Tesla hasn't gone: The racetrack. It will race the I-Pace in a new series for production electric vehicles, starting this fall. Image source: Jaguar Land Rover.

But will it outperform the Model X?

Let's cut to the chase. Whether the I-Pace can match or beat the Model X is likely to be the big question on all electric-vehicle enthusiasts' minds when the electric Jaguar is revealed on Thursday.

Tesla currently offers the Model X in three versions. All are dual-motor designs with all-wheel-drive and standard seating for five. (Seating for six or seven can be added as extra-cost options.) They are: 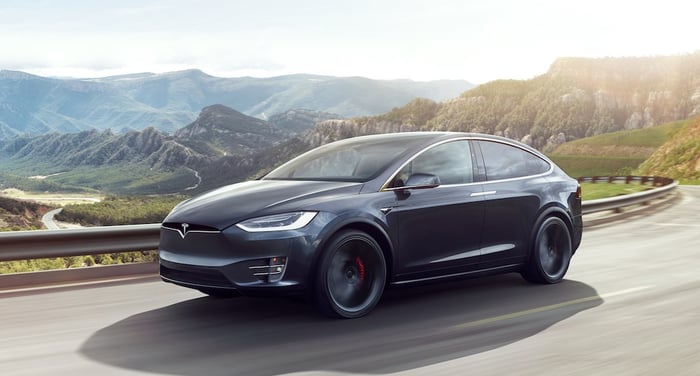 Styling is subjective, but the Model X is probably the least successful of Tesla's designs, visually. The I-Pace may have it beat on curb appeal. Image source: Tesla.

My sense is that Jaguar won't try to match or beat the P100D's specs at first, though a high-performance version seems likely to appear later on. My guess is that at launch, the I-Pace's range and acceleration will roughly match that of the Model X in 100D trim, possibly at a somewhat lower price. (I also expect that the Jaguar's interior trim and general fit and finish will be a step or two ahead of the Tesla's.)

If it even comes close, Jaguar could have a hit on its hands. And if it outpaces the Model X, Tesla could find itself scrambling.