Shares of QEP Resources Inc (NYSE:QEP) surged on Thursday, up by more than 13% as of 9:45 a.m. EST. Not only did the oil and gas company report surprisingly strong fourth-quarter results, but it unveiled a slew of strategic initiatives that will transform it into a pure play on the Permian Basin.

QEP Resources reported $274 million -- or $1.13 per share -- of adjusted net income in the fourth quarter, which was light-years ahead of the consensus estimate, beating analysts' expectations by a jaw-dropping $1.20 per share. Several factors fueled that strong result, including a 7% improvement in oil production, a 15% increase in oil and gas prices, and a hefty drop in expenses. 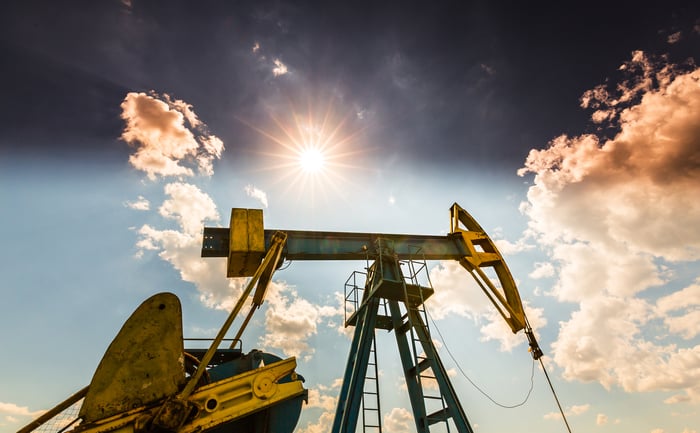 That said, as strong as the quarter was, it wasn't what caught the attention of investors. Instead, the headline-grabber was QEP Resources' announcement of a series of strategic initiatives to transform into a pure-play Permian Basin producer. The company said that it has hired advisors to sell its positions in the Williston and Uinta basins and plans to market the rest of its non-Permian assets in the second half of this year. QEP Resources expects to use the proceeds from those asset sales to fund its Permian development program until it becomes cash flow neutral next year. In addition to that, it plans to reduce debt and repurchase up to $1.25 billion in shares. For a company with a $2.3 billion market cap after today's rally, that's a meaningful repurchase program.

The transformation into a pure play on the Permian is one that several rivals have undertaken over the past year. Most recently, Pioneer Natural Resources announced plans to sell all its non-Permian assets to focus on its industry-leading position in that fast-growing space. Like QEP, Pioneer Natural Resources also planned to use some of the proceeds from those assets sales to strengthen its balance sheet and buy back stock, with it authorizing a $100 million repurchase program.

"The strategic initiatives announced today are responsive to ongoing shareholder feedback and fit with our long-term goal of becoming a more oil-focused company," said CEO Chuck Stanley. He further noted that these moves would streamline QEP's operations, sharpen its focus, and quickly transform it into a leading pure-play Permian company. That said, QEP is joining a crowded field, as it's not the only company focused on that fast-growing region. However, the size of the repurchase program does stand out and could keep the stock heading higher from here given what buybacks have done for rivals that have gone on similar spending sprees.