Wind turbines have been getting bigger and more efficient for decades, but General Electric (NYSE:GE) is taking the improvements to a whole new level. The company recently announced a 12 megawatt (MW) offshore wind turbine that will be the largest in existence when shipments begin in 2021.

The new turbine is immense in size and it shows just how far the wind industry has come in just a few decades. A 1 MW turbine is no longer a big deal. To be competitive, companies have to produce turbines with blades so large they won't fit on a football field. Vestas Wind Systems and Siemens have long been the industry's leaders in large offshore wind turbines, but GE is now a player in the game, and it'll open an even bigger market for the wind industry in the future. 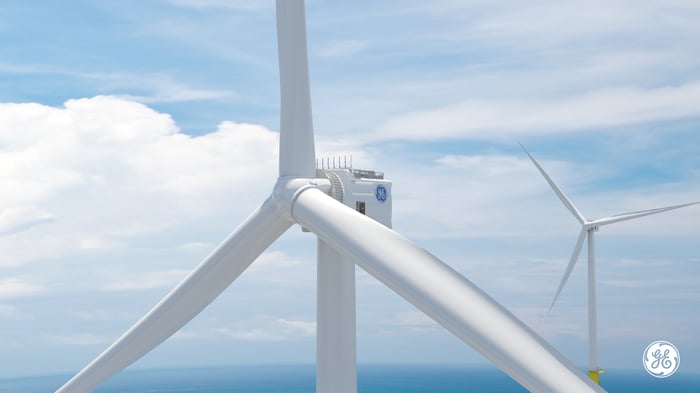 The sheer size of a 12 MW wind turbine over water is mind-boggling. The rotor diameter is 220 meters or nearly two and a half football fields, and the swept area is 38,000 square meters. The top of the blades will reach an amazing 260 meters out of the water, nearly the height of the Eiffel Tower in Paris. GE also estimates that a single turbine will provide enough electricity to power about 16,000 homes.

There are a few reasons GE, Siemens, and Vestas have all put their eyes on offshore wind farms as an area of growth. One is that there's more space available for development given that the low-hanging fruit has largely been picked onshore. But equally important is that yields improve by 15% offshore because the area is windier. That's why companies will go to the expense of building large wind farms offshore, even if it's cheaper to build the same turbine onshore.

The goal isn't just to supply wind turbines to offshore developers -- GE wants to supply a lot more components to renewable developers. The company has designed an offshore substation that can be self-floating or on a platform over the water. A similar converter station offshore can be used to convert alternating current to direct current, which can be more efficient for transmission to onshore converter stations and substations.

GE isn't going to be the developer itself, leaving that to financing units that specialize in owning renewable energy projects. But if it can offer a full suite of products to developers to make a turnkey solution at a competitive price, it'll broaden the market opportunity.

GE takes a swing at the newest market in wind energy

The offshore wind industry is still in its infancy, developing initially in countries like Denmark and the United Kingdom where energy demand is high, space is limited, and ocean winds are strong. But the market is growing now that projects are economical in the U.S., Latin America, and Asia. The U.S. completed its first offshore wind farm in late 2016, and as costs come down, we could see many more megaprojects off the coast. 2017 data isn't out yet, but Wind Power Engineering reported that $29.9 billion was committed to offshore wind projects in 2016 and with bigger and more efficient turbines that number will likely rise. If GE can capture a large share of the market it'll have a significant impact on its energy business.

After years of being behind Vestas and Siemens in offshore wind technology, GE now has a product it can offer those markets, and that could drive growth in wind turbines well into next decade.