Out of a "battle force" of 282 warships, the United States Navy boasts just 11 aircraft carriers and a couple dozen mini-aircraft carriers -- LPD-, LHD-, and LSD-class amphibious assault vessels featuring at least some "flat top" space on their decks from which to launch tiltrotor transports and F-35B hover-jets.

That still leaves 85% of the Navy's battle force without enough room on deck to carry much more than a helicopter for air support. But what if there were a way to turn essentially every non-submarine warship in the Navy into an ad hoc aircraft carrier?

There may be a way -- and its name is TERN, short for "Tactically Exploited Reconnaissance Node." 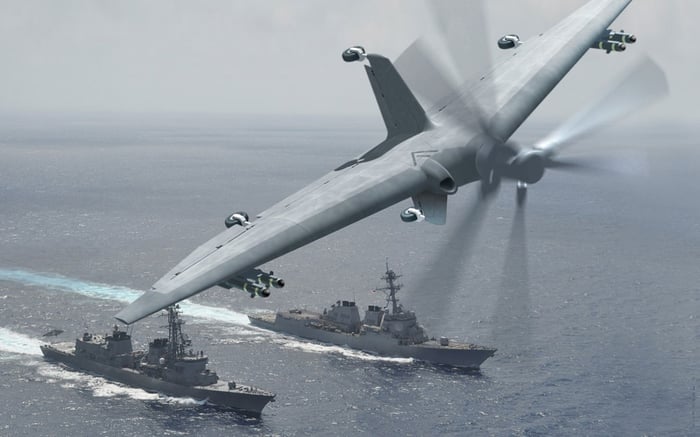 In ornithological fields, a "tern" is a small bird generally residing in wetlands near the sea. In the Navy as well, TERN is evolving into a water-bird of sorts. When initially proposed by DARPA -- the Defense Advanced Research Projects Agency -- in 2015, TERN was envisioned as a mechanical means of launching and recovering standard medium-sized drones from various small warships. As the TERN project evolved, however, DARPA ultimately concluded it might be best to design an entirely new drone -- one capable of taking off from and landing on essentially any warship.

That's where the TERN program is now -- a project run by Northrop Grumman (NYSE:NOC) to design a "tailsitting, flying-wing aircraft with a twin contra-rotating, nose-mounted propulsion system," able to launch from and land on a warship deck "like a helicopter," but transition to "wing-borne flight" like an airplane when on-mission.

To facilitate the drone's helicopter-like launches and landings, TERN will be powered by a General Electric (NYSE:GE) T700 engine -- a modified version of the engine GE sells to the Army to power its Black Hawk helicopters. In January, General Electric participated in test flights of TERN's power system in the California desert. In future months, additional ground tests and flight tests of the engine, integrated into a TERN prototype, will take place -- followed by at-sea test flights, launches, and landings.

Once fully developed and certified, Northrop's TERN is likely to take the shape of an equilateral triangular measuring 40 feet on a side, and topped by two 10-foot counter-rotating rotors, both driven by General Electric's engine. One of the larger drones in the U.S. military arsenal, TERN will be able to carry as much as 600 pounds of ordnance -- sufficient for six Hellfire missiles, for example -- and have enough endurance to carry out strike missions as far away as 600 miles from base.

Artist's conceptions of the craft (see above) show TERN overflying U.S. warships carrying a quartet of Hellfire missiles on its wings. These suggest that from the outset, Northrop is designing TERN to be not just a "reconnaissance" craft, as initially envisioned, but an armed drone that will provide any warship large enough to carry it with an airborne strike capability. As such, TERN can arguably fill a gap left by the Navy's contentious decision to focus on aerial refueling capabilities when designing its much higher profile MQ-25A Stingray drone.

It could also become a real boon to Northrop Grumman's stock. As I explained back in 2016, how big a deal TERN is for Northrop depends largely on how ambitiously the Navy intends to roll out the TERN program. The program has already generated $110 million in R&D dollars for Northrop, but whether those millions turn into billions in the future -- and how many billions -- depends on how many TERNs the Navy ultimately buys per ship.

Assuming it flies as promised, and costs not much more than the $17.8 million that DARPA allocated for development of a second prototype in 2016, I expect TERN to prove immensely popular with the Navy. $17.8 million would be roughly the cost of a Seahawk helicopter for the Navy, and half the cost of the Army's Apache attack helicopters, making it possible to turn any warship into an aircraft carrier -- on a budget.

The more ships TERN lands on, the bigger the profits for Northrop.