The firearms industry manufactured more guns in 2016 than in any previous year. Output approached nearly 11.5 million guns, according to the Bureau of Alcohol, Tobacco, Firearms, and Explosives (BATFE), which has been tracking this data for over 30 years.

Its Annual Firearms Manufacturing and Export Report shows there were 5.5 million handguns made that year, up 25% from 2015, and almost 5.1 million rifles and shotguns, a 14% increase.

The agency delays the release of its data for competitive reasons, but its records show the industry has been growing markedly over the past decade, with nearly three times more guns manufactured today than in 2007.

In 2015, Sturm, Ruger (NYSE:RGR) produced almost 1.7 million firearms, making it the largest U.S. gunmaker, a position it held for several years running. But other well-known manufacturers such as Beretta, Colt, and Glock actually placed further down the list.

Beretta, for example, was 15th on the list while lesser-known manufacturers (outside the gun-enthusiast market, anyway) like Taurus, Kimber, and Wm. C. Anderson placed higher.

The above table excludes miscellaneous firearms, but that category did not change the rankings. Even so, Sturm, Ruger was deposed as the top gunmaker by Smith & Wesson, which the next year would change its corporate name to American Outdoor Brands (NASDAQ:SWBI) while keeping the historically significant Smith & Wesson name for its firearms.

Long arms made the difference

Net revenue from firearms sales for Ruger jumped 20% in 2016 to $658 million, which matched the increase in production the gunmaker saw, with the number of firearms manufactured going from almost 1.7 million to more than 2.0 million. In particular, Ruger ramped up production of its pistols, increasing that category 38% year over year, even as the number of revolvers eased back.

While Smith & Wesson also cranked up its production, with the number of pistols jumping 44% from 2015, the real push came from rifles, which nearly doubled in volume in 2016. That was generally due to increased demand for modern sporting rifles but also for the budget-priced M&P Sport rifle that was introduced in 2016, as well as its Thompson/Center bolt-action hunting rifle. Long-gun revenue surged over 40% that year. 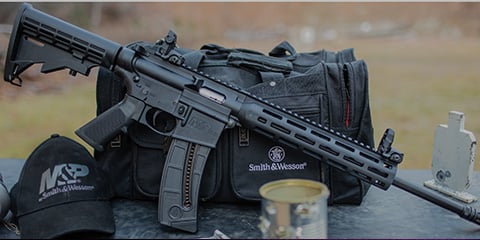 Even so, Ruger remains the second largest rifle manufacturer, just behind Remington, which recently declared bankruptcy, but well ahead of both Maverick Arms and Vista Outdoors' (NYSE:VSTO) Savage Arms. Yet when taking all long guns into account (rifles and shotguns), Remington is far and away the leader, with over 1.2 million units manufactured.

Despite the strength of these 2016 figures, the gun industry is currently in a weaker demand environment, as revenue declines along with criminal background checks performed by the FBI. The National Shooting Sports Foundation reported that adjusted background checks were down almost 3% in 2017 from the year before, and they're running nearly 5% lower so far in 2018.

Both American Outdoor Brands and Sturm, Ruger have cut back on production and laid off employees to adjust to these market conditions. When BATFE publishes its next report, we may very well see a big shake-up in the rankings once again.