Please ensure Javascript is enabled for purposes of website accessibility
Log In Help Join The Motley Fool
Free Article Join Over 1 Million Premium Members And Get More In-Depth Stock Guidance and Research
By Ashraf Eassa – Apr 4, 2018 at 10:00AM

It's not even a contest.

On March 27, Apple (AAPL -4.91%) announced an updated version of its low-cost 9.7-inch iPad. The two standout improvements from the prior generation model, which launched about a year ago, was the inclusion of an upgraded processor as well as support for the Apple Pencil.

The new iPad is also widely viewed as Apple's answer to Chromebooks, which are low-cost laptops that run Google's (GOOGL -2.63%) (GOOG -2.63%) Chrome OS. 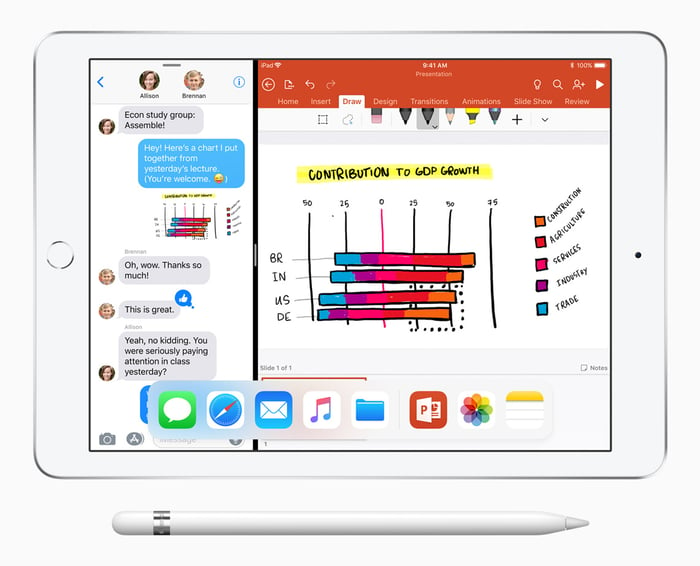 Although there's a lot of debate as to whether the new iPad can effectively capture both mind-share and market share from Chromebooks in education, there is one way in which Apple's new iPad is vastly superior to virtually every Chromebook in existence: performance.

The A10 Fusion outclasses Chromebook processors

Chromebooks are, by design, low-cost computers, so they tend to have relatively low-cost, low-performing processors -- at least by notebook PC standards. Chip giant Intel (INTC -2.76%) supplies the processors in most Chromebooks, though there are a few Chromebook models with chips from low-cost mobile processor makers like Spreadtrum and Rockchip.

The Intel chips that typically power Chromebooks are Intel Celeron processors, the lowest-end processors in Intel's notebook processor product stack. Some of these processors are based on Intel's more efficient, but slower, Atom architecture, while others are based on the company's higher-end Core processors (though appropriately cut down to be sold as Celeron chips).

For some perspective, here's how the A10 Fusion compares to the Intel Pentium N4200 (this is a step up from the typical Celeron processors found in Chromebooks) in CPU tasks as measured by the Geekbench 4 processor test:

It's clear that even the entry-level iPad is miles ahead of the typical Chromebook in terms of computing power. However, computing power is only there to facilitate the software. What Apple needs to do now, particularly if it cares about trying to win in education, is to make the much superior computing performance of the iPad platform actually matter to consumers.

This will take significant innovations in first-party software as well as services to get education customers to switch over, especially considering that, while slower, Chromebooks are substantially cheaper and don't require several expensive accessories (e.g., keyboard and Apple Pencil) to realize their full functionality.

A computing performance advantage in Apple's favor is certainly welcome, but it's by no means a proverbial silver bullet in the war against Chromebooks in the education market.