Walt Disney's (NYSE:DIS) long-awaited direct-to-consumer streaming service for ESPN, called ESPN+, is finally here. ESPN+ is a subscription service users can pay for to get access to content beyond what's included in existing network content. ESPN+ launched alongside the new "re-imagined" ESPN app on Thursday.

Disney's redesigned ESPN app and the launch of ESPN+ together signal one of the company's first major steps to up its ante in a multiscreen environment.

Priced at $4.99 a month, or $49.99 per year, ESPN+ will feature more sports content, direct access to "thousands of live games," original programming, exclusive content, and access to ESPN's entire library of on-demand content. In addition to monetizing the app by selling subscriptions to ESPN+, the app will include advertising. But advertising will be limited for ESPN+ subscribers.

Content will be able to be streamed in three different tiers within the overhauled app: "video clips and highlights for all users; 'TV Everywhere Streaming' of live and on-demand content from ESPN's U.S. linear and digital networks for pay TV subscribers; and ESPN+, for the direct-to-consumer streaming service's subscribers."

The redesigned app will use technology Disney gained last summer when it acquired BAMTECH, a leader in direct-to-consumer streaming technology, from MLBAM. The "state-of-the-art" video platform enables Disney to deliver "an incredible experience," Disney said.

From its launch, ESPN+ is available on Amazon.com, Apple, and Alphabet's Google streaming-TV devices, smartphones, and tablets.

This is just the tip of the iceberg

Investors should realize that ESPN+ is a platform. In addition to making three tiers of video content -- clips and highlights for all users, pay-TV content, and ESPN+ content -- available to users on the app, Disney also offers more add-on options. The app currently includes the ability for users to subscribe to additional streaming services like MLB.TV -- and it will offer NHL.TV sometime this year or next year. 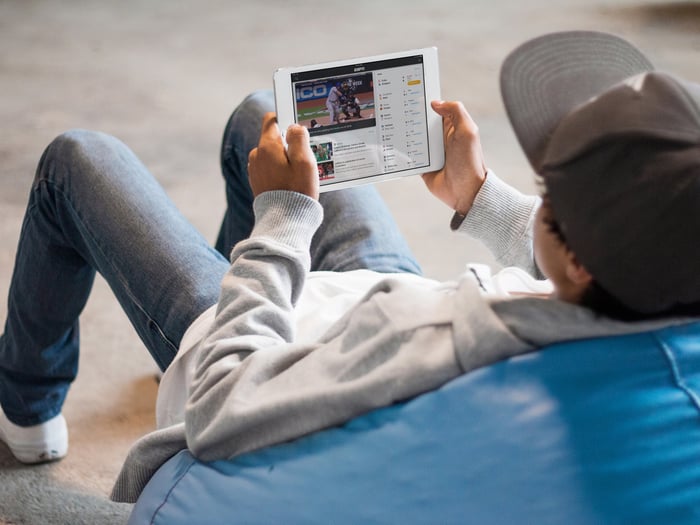 Furthermore, this redesigned ESPN app is just the beginning for Disney in its transformation to becoming a direct-to-consumer company. The company has several major initiatives on the horizon that could help accelerate Disney's transformation. As part of its acquisition of the entertainment assets of Twenty-First Century Fox (NASDAQ:FOX), which Disney expects to close by June 30, the latter will gain a controlling stake in streaming TV service Hulu. Disney also plans to launch an aggressively priced Disney-branded streaming service in 2019, which will feature Disney, Pixar, Marvel, and Star Wars films as well as original programming.

Disney is bullish on its long-term vision to transition from a licensed to third-party model to a self-distributed model. "[T]he profitability, the revenue-generating capability of this initiative is substantially greater than the business models that we're currently being served by," said Disney CEO Bob Iger in the company's third-quarter earnings call last year.