However, those figures are just a starting point for understanding the profitability of the fast-growing e-commerce giant. For one thing, Amazon Web Services -- which started off as a side business -- has become a huge profit driver in recent years, at times overshadowing the core retail business. Additionally, Amazon's penchant for investing heavily in growth initiatives has tended to obscure its underlying profitability. Lastly, the company hands out huge amounts of stock-based compensation.

With President Trump having recently raised the possibility of antitrust action against Amazon, the true profitability of its retail operations could become a significant issue. (If Amazon is running its e-commerce business at a loss, it could potentially be accused of predatory pricing.) With that in mind, let's take a closer look at Amazon's recent financial results.

A look at Amazon's segment results

In 2017, AWS achieved a segment profit of $4.3 billion: more than the entire company's pre-tax profit. Indeed, while Amazon earned a $2.8 billion segment profit in North America last year -- putting its segment margin at 2.7% -- the international segment posted an ugly loss exceeding $3 billion, leaving its retail operations in the red overall. However, from the perspective of U.S. regulators, Amazon's performance in North America is of primary importance. Furthermore, the Prime ecosystem is more developed in the U.S. than it is abroad. Arguably, the profitability of Amazon's retail business in North America is proof that its international business just needs more time to mature.

What does free cash flow tell us?

Skeptics might discount the apparent profitability of Amazon's North America segment because accounting profits depend on a litany of management estimates. Many investors see free cash flow as a more meaningful metric.

That said, measuring free cash flow is hardly straightforward in Amazon's case. Indeed, the company reports three different free cash flow metrics. Based on the most generous one, Amazon generated $8.4 billion of free cash flow last year. However, including the cost of acquiring some property with capital leases (mainly for AWS), free cash flow was negative to the tune of $1.5 billion.

In any case, free cash flow metrics unfairly punish Amazon for its growth focus. The company could easily produce more free cash flow by not investing so much money in new warehouses, technology, and other equipment. Considering Amazon's rapid revenue growth, it would be hard to argue that its past investments have been wasteful.

Stock-based compensation is another complication

Amazon's liberal use of stock-based compensation is another factor that makes it tough to gauge the company's underlying profitability -- in this case, making Amazon look more profitable than it really is.

Last year, Amazon granted 8.9 million restricted stock units, while 6.8 million restricted stock units vested. These stock awards had no impact on free cash flow, even though the value of the vested awards would be roughly $10 billion based on Amazon's recent stock price. Yet this stock compensation has a real economic impact on other shareholders, by diluting their ownership stakes in the company. Adjusting for the value of stock-based compensation, Amazon's free cash flow would have been deeply negative last year.

Amazon undercounts the true value of its stock-based compensation in its income statements as well. Last year, it reported just $4.2 billion of stock-based compensation expense, even though the value of the shares that vested during 2017 was $6.8 billion at the time and nearly $10 billion today. This accounting quirk stems from the fact that Amazon's stock price has nearly quadrupled in the past three years. 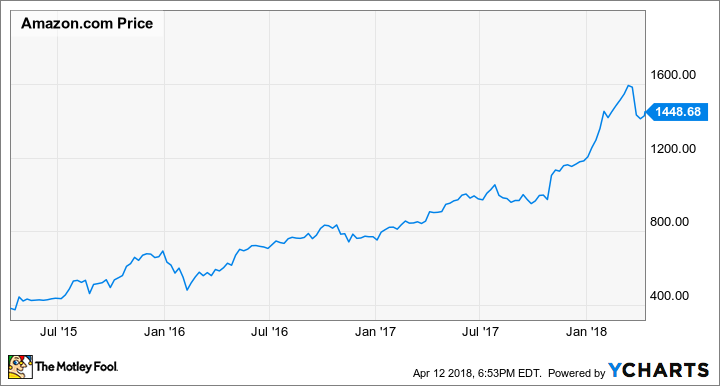 The discrepancy between the accounting cost of the stock awards and their economic value filters through to Amazon's segment results. Thus, Amazon's reported 2017 North America segment profit of $2.8 billion doesn't reflect the full cost of the segment's stock-based compensation.

If there's one thing that this exercise has shown, it's that any evaluation of Amazon's financial performance involves a lot of interpretation.

Based on the North America segment's reported profit or the most generous measure of free cash flow, Amazon's retail operations are solidly profitable, despite the cost of its growth investments. On the other hand, including the cost of capital leases and stock-based compensation creates a much-gloomier picture.

Still, while it's impossible to measure the true cost of all of Amazon's growth initiatives, it's clear that the company's moves to expand its fulfillment capacity, speed up deliveries, and insource some of its logistics are hurting its near-term profitability. If it were possible to strip out those costs, a profitable "core" would come into focus. But until Amazon runs out of growth opportunities to invest in -- which could be decades from now -- it will remain difficult to assess just how big and profitable this core is.