China has been a tough market for Qualcomm (NASDAQ:QCOM) over the past few years. Chinese regulators fined the chipmaker nearly $1 billion in late 2015 over its licensing practices, and forced it to lower its licensing fees for Chinese OEMs. Even then, some Chinese OEMs allegedly underreported their shipments to pay lower licensing fees, forcing Qualcomm to sign new licensing agreements with each device maker.

Qualcomm's long-delayed takeover of NXP Semiconductors (NASDAQ:NXPI) remains in limbo as China's Ministry of Commerce takes its time with its decision. Qualcomm tried to curry the favor of the Chinese government by working with Chinese companies to develop new chips for connected cars, Internet of Things (IoT) devices, and 5G technologies. Unfortunately, President Trump then proposed tough tariffs against China, turning Qualcomm into a potential target for retaliation from Chinese regulators. 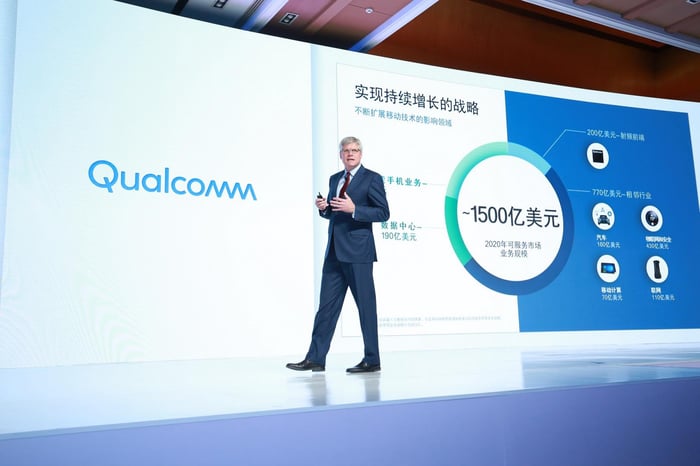 Those headwinds were already brutal, but the U.S. Department of Commerce recently dealt Qualcomm another blow by banning all component shipments from American companies to Chinese telecom giant ZTE (OTC:ZTCOY) for seven years. ZTE was found guilty of violating trade sanctions by shipping products to Iran, and pleaded guilty to the charges in late March.

Why the ZTE ban hurts Qualcomm

Qualcomm, the largest mobile chipmaker in the world, supplies chips to "almost half" of those devices, according to Counterpoint Research's Neil Shah. Shah estimates that at about $25 per chip, Qualcomm generates "close to half a billion dollars" in annual revenues from ZTE. Research firm Canalys estimates that Qualcomm supplies chips for 65% of ZTE's smartphones.

Analysts expect Qualcomm's revenue to fall 4% to $22.2 billion this year, so ZTE orders of $500 million would be about 2.2% of that. That blow seems manageable, but it comes at a terrible time for Qualcomm. Qualcomm's chipmaking business, which generates most of its revenues, is being challenged by cheaper chipmakers and first party OEMs like Huawei. Its licensing business, which generates most of its profits, is being targeted by regulators and OEMs, which claim that its fees are too high.

The decision to block Qualcomm from supplying chips to ZTE also leaves the door wide open for rival chipmakers like Taiwan's MediaTek and China's own HiSilicon (a subsidiary of Huawei) to fill the void. Samsung (NASDAQOTH: SSNLF), which has been itching to sell its Exynos SoCs to third-party device makers, could also swoop in.

Between the third quarters of 2016 and 2017, Qualcomm's market share in application processors rose from 41% to 42%, according to Counterpoint. But with the loss of ZTE, its year-over-year growth could reverse.

The ZTE ban is an odd move that hurts American companies while helping Chinese ones. The ban already crushed the stock price of U.S. fiber optic companies like Acacia Communications (NASDAQ: ACIA), which generated 30% of its sales from ZTE's orders last year.

Locking out companies like Qualcomm and Acacia merely encourages ZTE to order more components from Chinese manufacturers. Other Chinese OEMs, realizing that their supply of American components could be abruptly cut off, would likely do the same.

The Chinese government, which is already focused on reducing the company's dependence on foreign technologies, will likely pour more money into domestic chipmakers to aid major companies like ZTE. Meanwhile, American companies might think twice before accepting bulk orders from Chinese OEMs.

What's next for Qualcomm?

Qualcomm has a lot on its plate right now. It's still reeling from Broadcom's blocked bid, its legal battles against Apple are escalating, the future of the NXP deal remains murky, and its former CEO is reportedly trying to take the company private.

The Commerce Department's decision to block U.S. companies from supplying components to ZTE marks another escalation of trade tensions between the U.S. and China. Qualcomm, once again, is stuck in the crossfire and forced to deal with the consequences.