With Disney's (NYSE:DIS) biggest domestic theme park addition of 2018 set to open at the end of next month, the media giant is leaning on one of its main assets to drum up some buzz ahead of the telltale summer travel season. Toy Story Land opens at Disney's Hollywood Studios in Disney World on June 30, and the new 11-acre expansion was all over ABC on Wednesday.

Promo for the new project hit Good Morning America and The View in the morning, The Chew in the afternoon, and Nightline in the evening. Disney owns ABC, of course, so naturally all of the segments were fluff pieces absent any hard questions about recent price hikes or the controversial move to start charging overnight resort guests for parking.

It's a brilliant move. Slamming ABC across four of its shows that, in some cases, attract entirely different audiences is a great way to get the word out. The content was targeted effectively. Good Morning America viewers were treated to costumed characters showing off the Slinky Dog Dash kiddie coaster. A few hours later, the foodies tuning in to The Chew were offered a glimpse of some of the more unique items that will be served at the Woody's Lunch Box counter-service eatery. The official grand opening may be eight weeks away, but you need to plant the seed now for folks that are starting to plan and book their summer getaways. 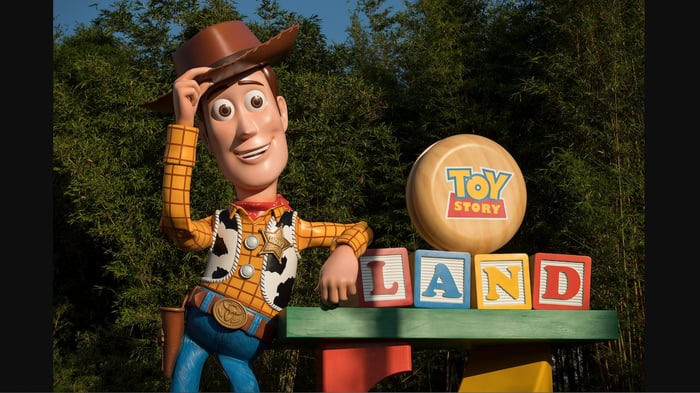 Not a flying toy

This isn't a new strategy for Disney. The family entertainment behemoth also raided ABC programming with a media blitz last year to promote Pandora -- The World of Avatar. Getting the hype train rolling on Toy Story Land won't be easy. The Toy Story franchise may be far more beloved to Disney fans than Avatar, but the new rides are basic carnival attractions that lack the bar-raising tech found in Pandora's Flight of Passage flying banshee experience.

Toy Story Land also has the poor misfortune of having Star Wars: Galaxy's Edge and several other rides and attractions opening in 2019. Why would a family plan a trip to Disney now when they can hold off until next summer and see it all? Rival area theme parks are also waiting until 2019 for major game-changing additions.

The buzz -- or the Buzz buzz, if you will -- didn't end with Wednesday's ABC takeover. Disney's official parks blog also put out a clip of the installation of the audio-animatronic Wheezy figure that belts out the franchise's signature "You've Got a Friend in Me" song to riders on the final stretch of the Slinky Dog Dash coaster. It also released snapshots of the entrance sign featuring the iconic Woody cowboy character.

June 30 will be just the beginning. Disney's ABC is helping promote Toy Story Land, but the promo loving goes both ways. Disney announced last month that Toy Story 4 will hit theaters in June of next year, and it's fair to say that the millions of guests that will visit Toy Story Land between this summer's opening and next year's theatrical release of the sequel will feel a deeper bond with the franchise. ABC is promoting Toy Story Land this week, and Toy Story Land will promote Disney's consumer products and studio division next year. You've got a friend, indeed.