If you suffer from chronic back pain, you're not alone. Lower back pain is the second most common cause of disability in the United States and employees miss a combined 149 million days of work every year because of it. Clearly, treatment options for lower back pain fall short. However, that could change because Nektar Therapeutics (NASDAQ:NKTR) has just filed for approval from the Food and Drug Administration of NKTR-181, a novel painkiller that could work better than opioids. Is Nektar Therapeutics a buy?

In the U.S., 39 million people, or 19% of the population, have persistent pain; often that pain is in the lower back. The total cost of low back pain, including treatment, lost wages, and lowered productivity, is between $100 billion and $200 billion per year, and total spending on chronic pain medication exceeds $20 billion per year. 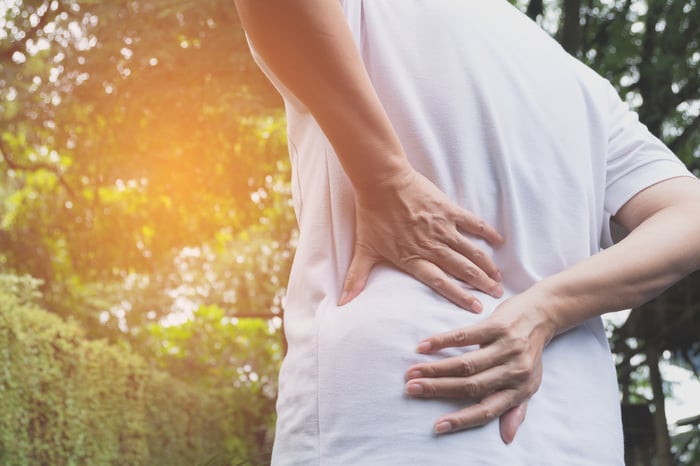 Patients with chronic back pain are commonly prescribed opioids, but their pain often persists, and opioids present a significant risk of abuse. According to the National Institute on Drug Abuse, an estimated 2.1 million people in the United States have a substance-use disorder due to prescription opioid pain medicines. And although most people don't seek treatment for opiate abuse, spending on treatment for those who do seek help still clocks in at an eye-popping $29 billion, according to the Pew Charitable Trusts.

Doctors have become more vigilant when prescribing these painkillers, yet they remain some of the most widely prescribed drugs. In 2016, about 230 million prescriptions were written in the U.S. for opioids, including OxyContin, because there aren't any good treatment options available to fully displace them.

Opioids relieve pain by attaching to endogenous opioid receptors in the brain; these attract neurotransmitters like endorphins and enkephalins that reduce the feeling of pain. Opioids can also trigger the release of dopamine, however, and that's a problem: Dopamine is associated with positive feelings, such as reinforcement, pleasure, and euphoria, that lead to opiate addiction.

In the past, drugmakers have attempted to combat opioid addiction and abuse by reformulating medications to make them less easily tampered with. Unfortunately, the widespread abuse of opioid medications shows those efforts have failed.

Nektar Therapeutics has taken a different approach with NKTR-181. Like opioid medications, NKTR-181 targets pain receptors in the brain. But it's an entirely new chemical entity with a molecular structure that makes it pass through the blood-brain barrier more slowly. Researchers have discovered that the relationship between opiates and the reinforcing effect associated with dopamine is stronger when opiates enter and leave the brain faster, so the unique design of NKTR-181 may offer patients a better treatment option.

If it wins FDA approval, NKTR-181 will become the first long-acting, selective mu-opioid agonist that can control pain without causing high levels of euphoria that contribute to abuse and addiction, regardless of tampering.

In phase 3 trials, NKTR-181, which has a 12-hour half-life to allow for twice-daily dosing, was evaluated in 600 people with moderate to severe chronic low back pain who hadn't taken opioids in the past. Overall, these patients saw an average pain score reduction of over 65%, which was, statistically, significantly better than placebo. NKTR-181 was also studied in trials designed to evaluate its relative potential for abuse when compared to common therapeutic doses of oxycodone; in those studies, NKTR-181 was rated less likable.

Can it win an OK?

There's an obvious need for new pain medications, and NKTR-181's trial data appears to best existing opioid options. But that doesn't guarantee an OK from the FDA. The regulator has been vocal in its support for non-opioid pain medications, and while NKTR-181 appears less likely to cause addiction, it still targets the mu-opioid receptors.

The FDA may or may not decide that NKTR-181 is an important enough advance to warrant its approval, but that's not the only open question. Nektar Therapeutics' business model is to collaborate with big pharma on drugs it creates, to avoid the cost of commercialization, but there haven't been any takers on NKTR-181. That lack of interest suggests there's considerable uncertainty about its commercial opportunity.

Why it's a buy

NKTR-181's future is a bit cloudy, but there's plenty going on at Nektar Therapeutics that make me think it's worth including in portfolios.

The company already collects royalties from AstraZeneca (NYSE:AZN) on Movantik, a drug that helps patients with cancer pain who suffer from opiate-related constipation, and from Shire (NASDAQ: SHPG) on the hepatitis A drug Adynovate. In Q1 2018, Nektar Therapeutics' royalty revenue grew to $11.1 million from $7.2 million; its total revenue, including product sales and licensing revenue, improved to $38 million from $25 million last year.

More importantly, it has a deep pipeline of collaborations that could help it grow sales in the future. These include a high-profile relationship with Bristol-Myers Squibb (NYSE:BMY) on NKTR-214, a cancer drug that's put up impressive efficacy when used alongside Bristol's PD-1 checkpoint inhibitor Opdivo, a multibillion-dollar-per-year blockbuster. In February, Bristol paid Nektar Therapeutics $1.85 billion up front, including an $850 million investment in the company, so the two could team up on NKTR-214.

Nektar Therapeutics is also working with Eli Lilly (NYSE:LLY) on NKTR-358, a potential treatment for autoimmune diseases that's in phase 1 trials. Last summer, Lilly paid $150 million up front, and it agreed to pay up to $250 million on additional development and regulatory milestones to work with Nektar Therapeutics on the drug.

Admittedly, plenty could go wrong and derail these programs, causing Nektar Therapeutics' stock to fall. But I think there are enough irons in the fire to make it one of the most intriguing midsized biotech companies investors can buy.