The fiscal first quarter represents a small fraction of GameStop's (NYSE:GME) annual revenue and an even smaller portion of its profits. Still, investors came into this week's earnings report hoping to see evidence of management's progress at getting the business back on track.

The specialty retailer didn't end its sales or profitability slide, but the results did meet management's targets while supporting GameStop's double-digit dividend payout.

Sales trends were negative in a sharp turnaround from the holiday quarter that was driven by a tough comparison with the prior-year period. GameStop's profitability also took a hit due to rising costs, including store closure charges. 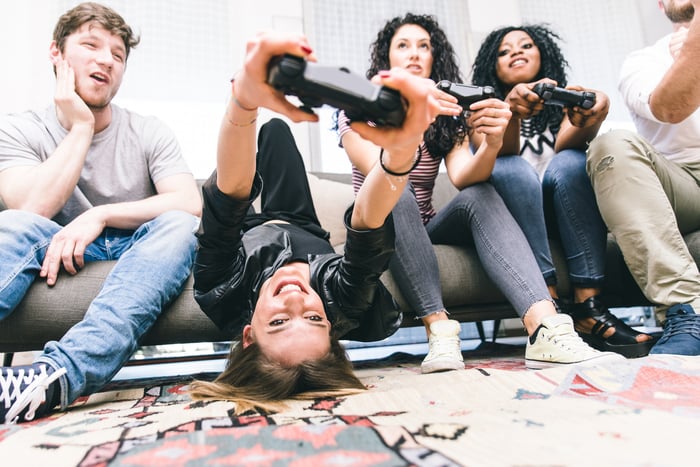 Executives said the overall results fit their projections as each of the retailer's core video-game segments were hurt by the highly successful launch of the Nintendo Switch in the prior-year period. "We were pleased to deliver first quarter sales and earnings in line with our expectations," Executive Chairman Dan DeMatteo said in a press release.

Management also announced the appointment of a new temporary chief executive, Shane Kim. "We are fortunate to have Shane assume the role of interim chief executive officer and welcome his insight as a video game industry veteran," DeMatteo said. Kim will focus on improving GameStop's operations as the board of directors searches for a permanent CEO. "With Shane's proven track record as a highly effective leader," executives explained, "we will position each of our businesses to optimize their operations and profitability over the long term."

GameStop affirmed its 2018 guidance that calls for revenue to fall by between 2% and 6% overall, with sales at existing locations ending somewhere between flat to down 5% after having risen 6% in 2017. Adjusted earnings are still expected to land between $3 per share and $3.35 per share, which would easily cover the $1.52 per share of dividend payments that the company has promised to its shareholders.

Close to 90% of that profit total is yet to come, though, and that intense seasonality is a reminder that GameStop hasn't yet succeeded in transitioning away from the volatile, and shrinking, market for physical video-game sales. Instead, its 2018 results will largely depend on the cadence of new hardware and software releases from Nintendo and other game suppliers.