"I don't personally think ads are the right way to monetize messaging," Facebook (NASDAQ:FB) CEO Mark Zuckerberg famously said in the wake of the 2014 acquisition of WhatsApp. While Zuck was referring to WhatsApp, the statement did seemingly have implications for Facebook's homegrown messaging service, Messenger. In the years since, Facebook has changed its tune, starting to test out ads in Messenger in 2017.

After reversing course on its monetization strategy, the social network is now doubling down on Messenger ads. 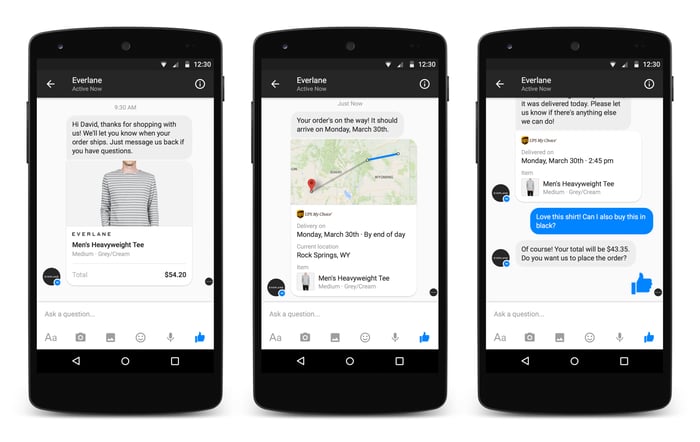 Chatting with businesses will be Messenger's other monetization strategy. Image source: Facebook.

Recode reports that Facebook is now starting to insert autoplay video ads into Messenger, which are being displayed to some users directly in their messages inbox. The risk with ads of any kind of a messaging service was that they hurt the user experience quite a bit, distracting users that are trying to communicate with friends and family with ads that can be intrusive. It's quite different from seeing ads in content feeds, where they can somewhat blend in with other visual content. People have greater privacy expectations when it comes to messaging services, and nothing shakes your sense of privacy like seeing an ad follow you around the internet -- and into a private inbox.

Autoplay video ads are a popular ad format among social media companies, which often insert them muted into social feeds, since they fetch higher prices than traditional display ads. But adding them into a messaging service carries a greater risk of putting off users. The head of Messenger's ad business, Stefanos Loukakos, recently said the company is very aware of this risk and that Facebook prioritizes user experience above all else, according to the report. The implication is that if the ads adversely impact usage of the service, Facebook might walk them back.

For now, the autoplay video ads appear to still be in the testing phase. Facebook is a very data-driven company that extensively tests new features, garnering copious amounts of data before making operational decisions that affect its global user base of 2.2 billion monthly active users (MAUs).

More broadly, rolling out autoplay video ads in Messenger is but the latest in the company's growing effort to monetize more of its services with advertising. The core News Feed has hit a ceiling in terms of the ad load that Facebook and its users are willing to accept, which is why the company is increasingly turning to its other properties for ad distribution.

Just this month, the social networking giant turned on ads in Marketplace, its local classifieds service. Facebook is preparing to launch a dating service within a matter of months, and has said it won't monetize the service with ads. But considering what we've seen play out with Messenger, I'd take that statement with a grain of salt.