Shareholders of RV companies are curious about the potential effect of tariffs on steel and aluminum enacted by the Trump administration earlier this year, as these are key components in the manufacture of recreational vehicles. While both Winnebago and Thor have acknowledged modest commodity component increases in 2018, Winnebago CEO Michael Happe gave shareholders a more nuanced view of possible impacts during the company's earnings conference call:

One of our very real concerns with the tariffs and really, the overall trade war climate that is building is that ultimately, the North American customer in this case will end up paying for those tariffs and that trade war. And that will make those end customers have to -- it'll force them to make choices on where to spend their discretionary savings and dollars on. And we certainly [want to] keep the RV lifestyle moving in the right direction in terms of demand, but we also take very seriously the price increases that we ask of the market, because we're fully aware that they could have an impact in the future in terms of slowing demand. So, we'll look on anxiously as everybody else does as to how some of these topics are resolved. 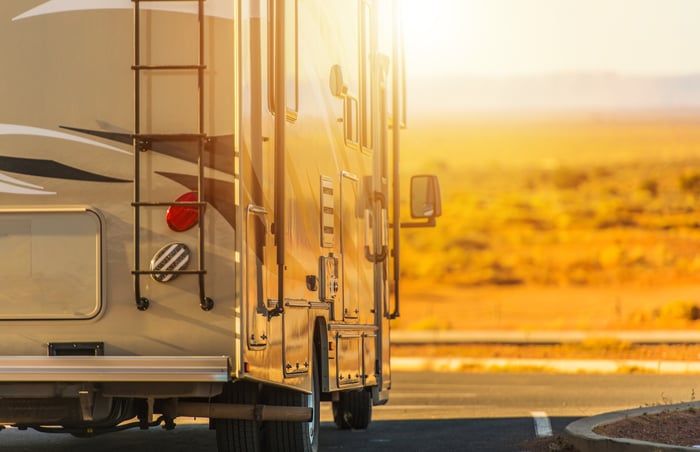 While Winnebago doesn't provide forward earnings guidance, its third-quarter results imply that the 2018 fiscal year is likely to close out on a positive note next quarter. The manufacturer has a reasonably healthy backlog that it can tap to record higher sales as its capacity improvements come on line. And the rising popularity of RVs among millennials should bolster critical towable revenue in the near future. For now, Winnebago's task is simply to execute in order to meet vigorous demand.