Recent fourth-quarter results showed that FedEx Corporation (NYSE:FDX) has bounced back solidly from a rough third quarter, in which its express segment took a hit from the difficulties of servicing peak demand periods during the holiday season. Its fourth-quarter earnings (FedEx's financial year ends in May) also demonstrated a company making good progress on its strategic objectives.

Let's take a look at what happened, starting with the headline numbers from the quarter. In short, it was a quarter pretty much in line with management's expectations, but as ever, it's important to look at the underlying movements in FedEx's earnings.

Total package volume only grew 0.1% in the express segment, but total composite package yield of $19.26 marked a significant increase on the $17.93 achieved in the fourth quarter of 2017. It was enough to drive total package revenue growth of 7.6%. It's a good performance given that FedEx express continues to integrate TNT Express, an acquisition completed in 2016.

The yield improvements are a sign of an economy that's turned the corner, and management feels suitably confident in the outlook for express as to invest in modernizing its fleet. Specifically, FedEx has ordered 24 aircraft from Boeing, which are due to be delivered between 2020 and 2025.

The key question for both UPS and FedEx has long been around whether both companies could get back to margin expansion in their ground operations -- rising e-commerce delivery volumes are great for revenue growth but they can pressure margin.

The good news from the quarter is that FedEx managed to boost margin in its ground segment for the second consecutive quarter, driven by a 5.5% hike in average daily volumes and a 5.6% jump in yield. 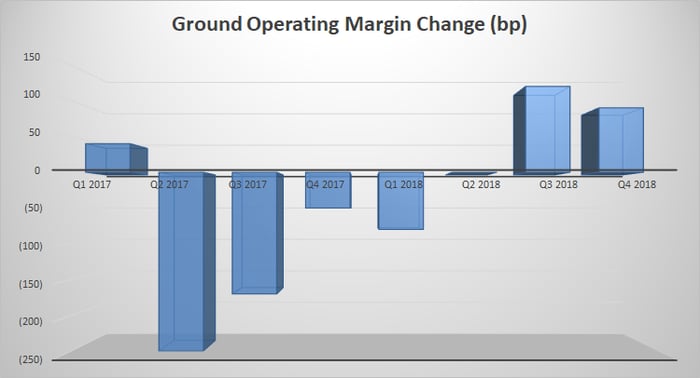 However, in a sign that FedEx is getting a handle on the issue, Bronczek announced: "We reduced our long-term capital plans for FedEx Ground to much better match capability expansion with pricing and volume growth."

The freight segment is probably the most economically sensitive of the three, so given the improving environment for industrial production in the U.S., it was no surprise to see the business doing well. In fact, freight's operating margin of 9.4% exceeded management's previous guidance range of 8%-9%.

The elephant in the room is obviously the impact of any potential escalation in trade conflict, but there is little FedEx can do about that. The increased investment in aircraft is a sign of confidence in the express business (not least with the TNT integration) and ground margin appears to be on an uptrend, while freight is benefiting from an upturn in the industrial economy.

Ultimately, there's no telling if global trade will be impacted, but from the point of view of FedEx's operational execution, the company is well on track to achieve its strategic aims in all three segments.