For a company like J.C. Penney (OTC:JCPN.Q), which once again appears to be careening toward financial ruin, having a corporate jet is arguably a necessary luxury for its CEO. Owning a fleet of corporate jets, however, seems like an indefensible extravagance.

Now that CEO Marvin Ellison has jumped ship to take over the top spot at Lowe's, the troubled retailer is moving to sell its three aircraft, even though it will suffer a significant financial loss by doing so. 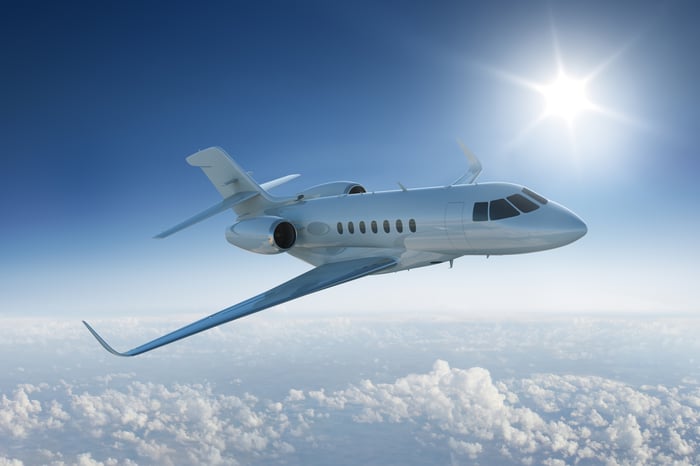 J.C. Penney required its CEO to participate in what it called a key associate protection plan (KAPP) that mandated he and his family use the corporate jets for business and personal travel. Although many companies make company airplanes available to their executives, J.C. Penney owned three of them: a 2001 Gulfstream IV-SP, a 2009 Gulfstream G450, and a 2010 Gulfstream G450.

In a bit of hubris, industry site Corporate Jet Investor notes that the last letter of each of the tail registration numbers for the three aircraft spelled out JCP.

J.C. Penney expects to receive $20 million from the sale of the corporate jets, according to a filing submitted to the Securities and Exchange Commission. However, it will incur impairment charges totaling $50 million in the second quarter. Going forward, it expects to save $5 million to $10 million annually on operating expenses by getting rid of the corporate largesse through reductions in depreciation and selling, general, and administrative (SG&A) expenses. SG&A expenses in the first quarter totaled $826 million.

To put things in perspective, J.C. Penney managed to post an operating profit of just $3 million in the first quarter, but at the same time carries over $4.1 billion in long-term debt. Flying executives and their families around the country seems like an expense the retailer should have been doing without for a while as it tries to regain its financial footing.

Yet Ellison was also the first Penney executive to have his personal travel expenses capped. If the costs of his flights exceeded $150,000 in a year, he was responsible for reimbursing the company for the overage. According to company filings, he incurred $139,612 worth of travel expenses in 2017.

When aircraft use was unlimited, however, Ellison's predecessor Mike Ullman racked up nearly $900,000 in flight costs, while Ron Johnson, who used the jets to commute to his home every weekend, spent almost $345,000.

Although the retailer should unload the aircraft, maybe it shouldn't be so hasty in dumping them at fire-sale prices. Bloomberg reports that used corporate jet inventory is at its lowest level in 15 years, causing prices to rise. In May, used-jet prices rose 2.4%, following a 1.5% increase in April. Even so, prices are at their lowest level in 25 years.

Although this may be a case of better late than never, J.C. Penney maintaining a fleet of corporate jets even as it spiraled down can be seen as a contributing factor in its financial condition. It obviously wasn't the cause of its collapse, but it was a perk that should have been jettisoned a long time ago.