Three gene therapy stocks have really stood out in the first half of the year. Sarepta Therapeutics (NASDAQ:SRPT), Solid Biosciences (NASDAQ:SLDB), and Regnxbio (NASDAQ:RGNX) stocks have soared 120% or more since the beginning of 2018. Here's what has made these the best gene therapy stocks of 2018 so far -- and a look at whether or not they have even more room to run. 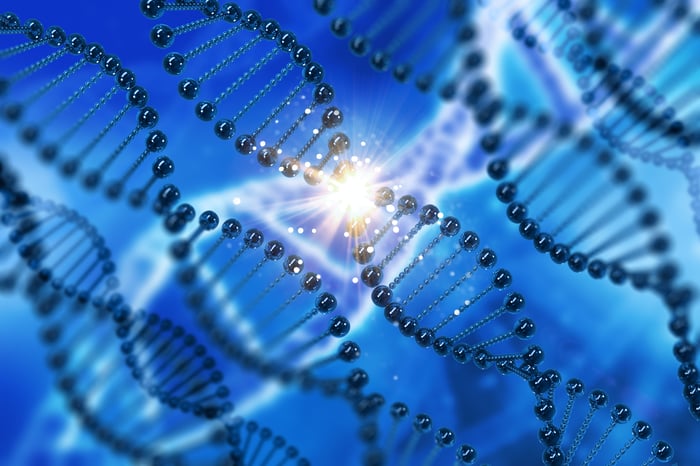 Most of Sarepta Therapeutics' success over the last couple of years hasn't come from a gene therapy. Instead, the big story for the biotech has been its RNA-targeted Duchenne muscular dystrophy (DMD) therapy, Exondys 51. However, Sarepta stock skyrocketed more than 140% in the first half of 2018 -- with an experimental gene therapy fueling much of its momentum.

On June 19, Sarepta reported interim data from a phase 1/2a clinical study of gene therapy AAVrh74.MHCK7.micro-Dystrophin in treating DMD. The biotech stock skyrocketed thanks to highly encouraging results from this study. Sarepta's gene therapy significantly increased the levels of micro-dystrophin -- a shortened version of the dystrophin gene. It also significantly reduced levels of creatine kinase, an enzyme linked to DMD muscle damage.

I have been waiting my entire 49-year career to find a therapy that dramatically reduces CK levels and creates significant levels of dystrophin. Although the data are early and preliminary, these results, if they persist and are confirmed in additional patients, will represent an unprecedented advancement in the treatment of DMD.

It's still very early for Sarepta's gene therapy, though. The positive phase 1/2a interim results included only three patients. However, gene therapy could give Sarepta a major opportunity in advancing the treatment of DMD.

Sarepta isn't the only biotech stock that has soared because of a gene therapy targeting DMD. Solid Biosciences stock is up 125% so far this year due to investor excitement over its DMD gene therapy, SGT-001.

It hasn't been all good news for Solid Biosciences since its initial public offering in late January, though. On March 14, the biotech announced that the FDA had placed a clinical hold on its phase 1/2 clinical study of SGT-001 after Solid reported an unexpected adverse event for a patient in the study.

That wasn't the end of the road for SGT-001, though. On June 18, Solid reported that the FDA had lifted the clinical hold and that the phase 1/2 study would resume enrollment. The biotech modified the protocol for the study to add administration of intravenous glucocorticoids in the initial weeks after patients received SGT-001, beef up patient monitoring, and ensure that Soliris would be available to patients if needed.

Regenxbio isn't targeting treatment of DMD, but the biotech is developing gene therapies for several other genetic diseases. And its stock has been a big winner in 2018 thus far, with Regenxbio's share price jumping 120%.

Probably the biggest catalyst for Regenxbio, though, didn't come from any of these programs. The biotech began to take off in April after Novartis announced an acquisition of AveXis. Regenxbio and AveXis partner on several gene therapy programs, including AveXis' lead candidate AVXS-101, which targets treatment of spinal muscular atrophy.

Regenxbio could have more catalysts in the second half of 2018. The company expects to report top-line results from the phase 1 studies of RGX-314 and RGX-501 later this year.

Will these stocks be winners going forward?

I think all three of these hot gene therapy stocks could increase even more. However, my concern is that much of the potential growth for each stock is already priced into the share price.

Sarepta, for example, claims a market cap of more than $8.8 billion. Sales for Exondys 51 are growing. The company could have other DMD products on the market in the not-too-distant future. Again, though, investors are already banking on tremendous success.

Neither Solid Biosciences nor Regenxbio have a product on the market yet. Both biotechs' lead candidates are still in early-stage testing. Clinical successes could drive these stocks higher, but there could also be considerable volatility for both Solid and Regenxbio.