The current bull market has been raging for nearly a decade. The stock market's epic run is making it difficult for investors to find compelling opportunities.

Thankfully, I recently came across an under-the-radar business that I believe is nicely positioned to deliver for its investors: BlackLine, Inc. (NASDAQ:BL). This founder-led software company is growing fast, boasts a rock-solid business model, and has a wide-open market opportunity ahead. Those factors make me believe that it's a great company for growth-stock investors to add to their IRAs. 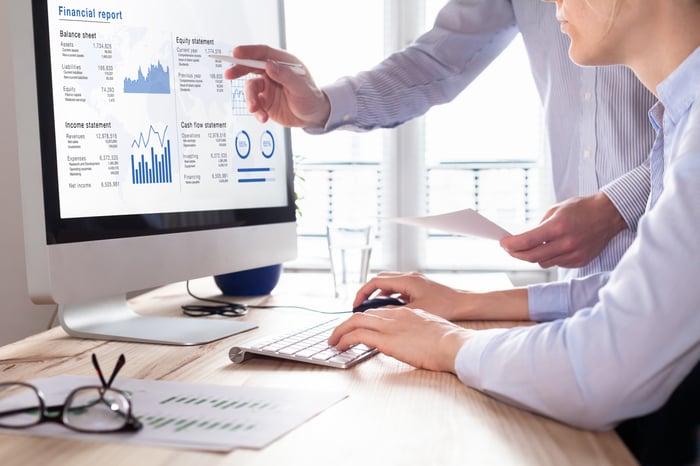 Every company depends on reliable financial data to make smart business decisions. However, it can be a hugely burdensome task to constantly gather, process, and consolidate financial information into usable financial statements. This process can be especially arduous for large multinational companies that need to pull, track, and reconcile financial data from a huge variety of sources (bank statements, enterprise resource planning systems, payroll processors, expense management programs, and more).

For years financial professionals have managed this complicated process primarily by using Excel spreadsheets and email. As you can imagine, this is hugely labor-intensive, inefficient, and error-prone.

The advantages of switching to real-time data collection and processing haven't gone unnoticed by the market. BlackLine's unique solution has already been adopted by a range of big-name multinational companies such as Costco Wholesale, Under Armour, Coca-Cola, Autodesk, and more.

In fact, thousands of companies and hundreds of thousands of users have already adopted BlackLine's solution. In turn, the company's revenue has soared:

As exciting as BlackLine's growth rates have been, there's still ample reason to believe the company has only scratched the surface of what's possible. Management currently estimates that its software could be useful to more than 165,000 global companies and 13 million professionals. That adds up to an $18 billion market opportunity.

In other words, BlackLine has only captured about 1% of its total addressable market thus far.

BlackLine is a software-as-a-service business; its business model is to charge each customer a recurring fee based on the number of users who are on the platform. That's great news for investors because it leads to recurring revenue, which leads to predictable revenue growth as more companies and users warm up to BlackLine's solution.

In an effort to accelerate growth, BlackLine has been spending lavishly over the last few years to enhance its commercial capabilities and build out its product suite. While that has resulted in net losses on the bottom line, the numbers have been trending in the right direction as the business continues to scale:

The company hasn't had any problem funding these losses, as its balance sheet remains packed with cash ($113 million as of the last quarter) and is completely free of debt. Better yet, BlackLine actually recorded non-GAAP profits during the last two quarters, so there's reason for investors to believe that the days of posting losses have finally come to an end.

In other words, this company is currently in great financial shape, and the numbers should only get better over time as new customers sign up.

A founder-led business with a winning culture

I'm a big believer in putting capital behind businesses that are still run by their founders. That's the case at BlackLine, as CEO and founder Therese Tucker has been running the show since she started the business in 2001. Tucker remains heavily invested in the business, too, as she currently owns more than 11% of shares outstanding; at current prices that ownership is worth more than $250 million. That should give investors confidence that she is heavily incentivized to grow shareholder value over time.

I also like that the company gets good reviews from employees. BlackLine has been named among the "Best Places to Work in Los Angeles" for five years in a row, and came in at No. 6 in Fortune's "Best Workplaces in Technology" ranking in 2018. While its reviews on Glassdoor.com are not perfect, they are decent enough to suggest that employees generally enjoy working at the company.

BlackLine is a buy

Between its rock-solid business model, wide-open growth opportunity, and founder-led executive team, BlackLine checks all of the boxes that I look for in a great growth stock. The only knock here is that Wall Street also sees huge growth potential for the business -- and has priced the stock accordingly. Shares are currently trading hands for more than 12 times sales, and 300 times next year's earnings estimates. Those are lofty figures, so if the company fails to deliver on its growth targets, shareholders like me could be in a world of hurt.

In spite of the risk, I think that BlackLine has enough going for it to justify an investment today. In case you think I'm all talk, you should know that I recently used the proceeds from a recent transaction to add to my BlackLine position, so my money is where my mouth is.