Shares of ON Semiconductor Corporation (NASDAQ:ON) lost 11.5% in June, according to data provided S&P Global Market Intelligence . Much of the decline appears to be tied to growing concerns that the semiconductor market would be impacted by trade disputes between the U.S. and China. Economic tensions between the two countries have simmered in 2018 and seemed to be heating up following news on June 18 that President Trump would direct the Office of the U.S. Trade Representative to apply a 10% tariff on an additional $200 billion in imported Chinese goods. 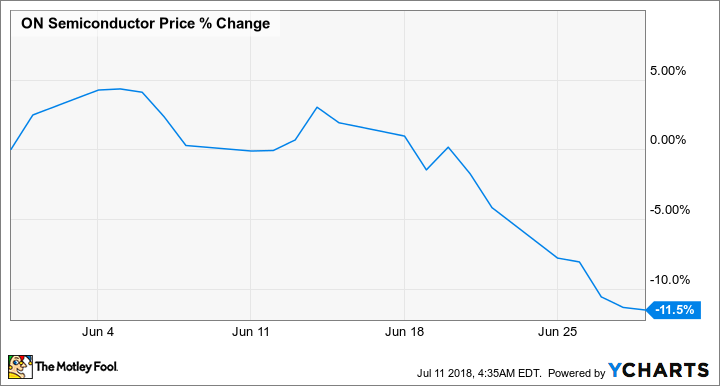 Toward the end of the month, sell-offs for ON Semiconductor and other chip stocks also followed the publishing of a tweet by U.S. Treasury Secretary Steve Mnuchin that was interpreted as an indication that investment restrictions would be placed on China and other countries that were seen as infringing on intellectual property held by American companies. 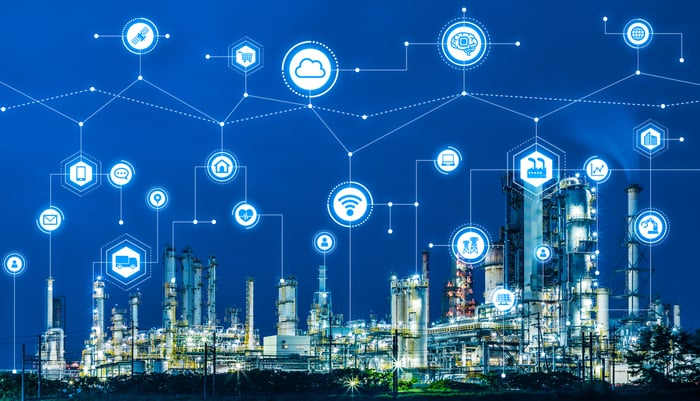 Semiconductors are at the heart of the technologies that power personal and government communication and information-technology networks, and both the U.S. and China have fears that foreign influence or other confounding factors at chip companies could create security weaknesses. These concerns have already had a significant impact on the industry, with the Trump administration blocking Broadcom's attempted buyout of Qualcomm due to concerns that a deal could weaken America's position in 5G and the country's long-term capabilities in the semiconductor space.

Talk of potential investment restrictions and escalating trade tensions in June prompted sell-offs across the industry. Treasury Secretary Mnuchin published the following message on Twitter on June 25 in response to news stories suggesting investing restrictions might soon be implemented:

On behalf of @realDonaldTrump, the stories on investment restrictions in Bloomberg & WSJ are false, fake news. The leaker either doesn't exist or know the subject very well. Statement will be out not specific to China, but to all countries that are trying to steal our technology.

This was interpreted by some analysts and industry watchers as an indication that comprehensive investment restrictions were on the way, and semiconductor stocks quickly sold off. Companies with big manufacturing and market exposure in the Chinese market and small- and mid-cap players in the space with more growth-dependent valuations tended to be the most significantly affected. However, the White House followed up with clarifications that there were no plans at the time to limit investments from other countries.

Intel (NASDAQ:INTC) stock lost roughly 10% last month. While some of the declines might be attributable to other developments at the company, the stock's performance tracked closely in line with the broader semiconductor industry -- suggesting that market outlook tied to trade issues was the bigger factor. 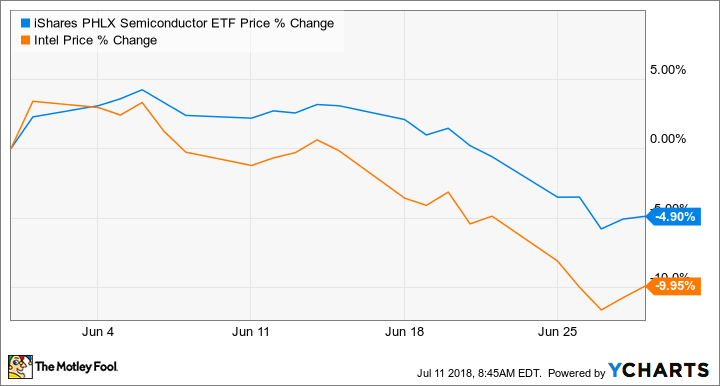 The chart above shows the June performance of Intel and the Philadelphia Semiconductor Index ETF, which tracks the PHLX Semiconductor Sector index, a capitalization-weighted bundling of 31 chip stocks that serves as a good reflection of the industry's performance.

Intel's data center and PC businesses are under pressure due to market trends and ascendant competitors, and the company has been counting on growth in China to help drive sales. A recent report by Stephen Guilfoyle published on The Street estimates that Intel derives roughly 23% from the Chinese market.

Meanwhile, Ambarella (NASDAQ:AMBA) stock declined 21% in the month, though some of its sell-offs were tied to disappointing guidance that arrived with the company's first-quarter results. Shares fell 12.9% in the day of trading that followed its June 5 earnings release, and the company would go on to shed an additional 10.2% as the month progressed and trade and investment-regulation fears hit the semiconductor industry.

As shown in the chart below, both ON and the broader semiconductor industry have seen some recovery in early July as the likelihood of strict investment regulations appears to have diminished. 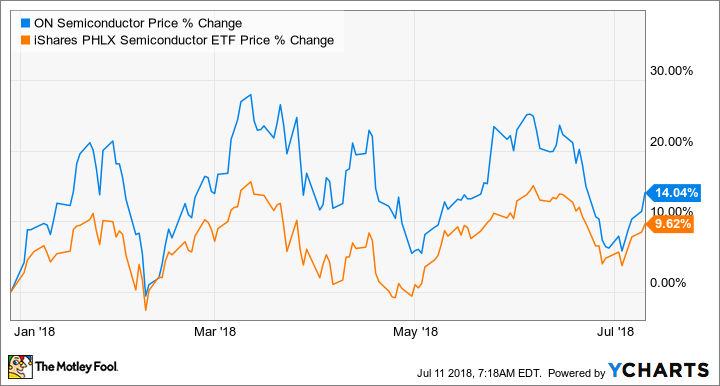 The company's stock price has bounced around a good bit in 2018, and it seems likely that shares will continue to be impacted by the trade situation with China. On that front, the Trump administration recently published the list of the $200 billion in imported Chinese goods that will be subject to the 10% tariff. China has stated that it will take "firm and forceful measures" in response.

Three of ON Semiconductor's manufacturing plants are located in China, as are three of its design centers, and the country is a huge market for the company's chips for machine vision and advanced driver-assistance systems. The company has significant exposure to the Chinese market and could be negatively impacted if trade relations continue to deteriorate.

From a broader viewpoint, ON's focus on machine vision chips for a range of Internet of Things devices should allow the company to benefit from the niche's large potential for growth. Demand trends for its products have recently been favorable, and it looks like the company has built a solid position in a market that's just beginning to unfold. With that in mind, investors should continue to monitor the trade situation in China and weigh developments against the long-term outlook for ON in its corner of the semiconductor space.

Why Shares of ON Semiconductor Corporation Lost 11.5% in June @themotleyfool #stocks $INTC $AMBA $ON Next Article
Current