Hope springs eternal for casino operators in Macau, China. Their shares rallied last week, after a disappointing gaming report had sent their stocks tumbling in the first few days of July. Wynn Resorts (NASDAQ:WYNN) was one of those hardest hit by the news, but also the one that rebounded the most.

There are good reasons for both reactions, but if analyst predictions for the rest of the year don't pan out, investors can expect to see Wynn Resorts folding its hand again. 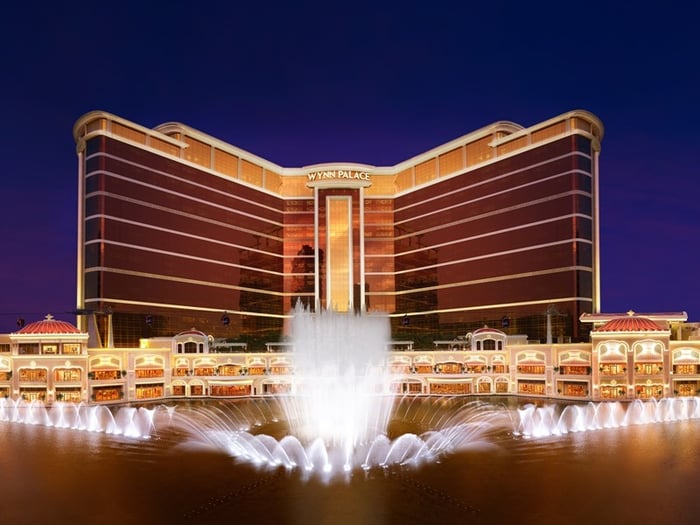 The June gaming report from Macau regulators revealed a second consecutive month of below-forecast revenue for the only legal place to gamble in China. The Macau Gaming Inspection & Coordination Bureau said gross revenue for the month grew just 12%, which was the same growth rate it posted in May and below the 18% increase that analysts had predicted.

Although one-time events -- such as the World Cup and the general seasonality of the second quarter -- may have led to the shortfall, it's also possible that something else is going on that would make it more than a temporary setback.

China has been tightening its monetary policy, and the country's huge financial stimulus spending, which initially sparked the run-up in the region's gaming sector, is now starting to fade. Continued fears of crackdowns on VIP gamblers, along with potential competition not only from Japan, but also from the island of Hainan, have added pressure and worry.

Couple all of that with the launch of a trade war between the U.S. and China, and the casino market there is looking shaky. 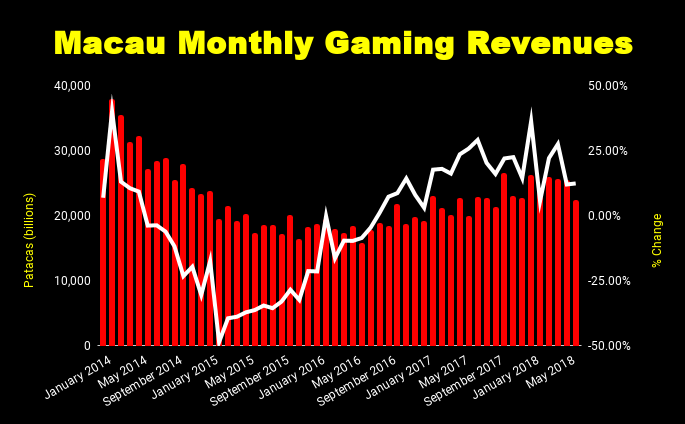 That's why Wynn Resorts took it on the chin when Macau's gaming regulator posted disappointing numbers. Wynn has a lot to lose if the region stumbles again, because it derives around 70% of its revenue from Macau. Hong Kong-based Melco Resorts & Entertainment (NASDAQ:MLCO) is also heavily vested in the peninsula's gaming market, which is why its stock fell the most of any of the major casino operators.

Melco stock fell more than 10% in the first week of July, while Wynn was down 6%. Las Vegas Sands, which also generates most of its revenue from Macau, fell 5% on the report, whereas shares of MGM Resorts -- which tilts most heavily toward its U.S. gaming operations -- barely budged.

Wynn Resorts stock has since rebounded, as analysts think the rest of the year will be upbeat, but there still ought to be lingering concerns about the company.

Of all the casinos in Macau, none has bet more heavily on VIP gamblers than Wynn. Where others have turned their resorts into theme park-like attractions to woo more of a mass-market audience -- in keeping with Beijing's dictates that casinos need to offer more non-gambling forms of entertainment to attract tourists -- Wynn has opted to offer visitors luxury shopping opportunities.

That means Wynn still relies heavily on high rollers. While it has benefited most from the rebound in VIP gambling in Macau, should such gamblers shy away again, it will also be hurt the most.

Numerous threats to its revenue stream

However, the possibility of baccarat on Hainan is a new threat. The limited gambling opportunity there likely won't amount to much because prizes won are not cash but hotel amenities: Any other sort of remuneration would run afoul of the country's constitution, which limits casino gambling to Macau. Still, the mere possibility of having another gambling destination so nearby -- particularly as Beijing wants to turn Hainan into "China's Hawaii" -- is troubling for Macau casinos.

The opening of casino gambling in Japan is even more troublesome, since this potential $15 billion market could siphon off the high rollers, something Hainan isn't likely to do.

Wynn stock has risen 22% over the past year. That's not bad, considering all of the turmoil the company has gone through recently. However, the stock has fallen almost 20% from its 52-week high. And because it no longer has its visionary founder to lead it forward -- a factor the casino operator attributed a lot of its value to -- it's no surprise that investors are worried about Wynn Resorts.