Dominant U.S. steelmaker Nucor Corporation (NYSE:NUE) reported second-quarter financial and operating results before market open on July 19; it delivered its best profits in a decade, and the second most profitable quarter (and best-ever second quarter) in the company's history. The company also delivered strong revenue growth and higher volumes, driving margins up as its facilities operated more efficiently under more demand.

Even better for investors, management offered a positive outlook, setting the expectation that demand for steel from end markets will remain strong. That bodes well for Nucor to continue delivering big profits. Let's take a closer look at Nucor's second quarter, and what to expect in coming quarters.

Nucor reported revenue of $6.5 billion in the second quarter, up 16% from the first quarter of the year and 25% above the year-ago quarter. This is a substantial increase, driven by both higher steel selling prices and higher volume, as demand continues to remain strong. Average sales price per ton was up 12% sequentially and 17% from last year, while total tons shipped increased 3% and 6% sequentially. 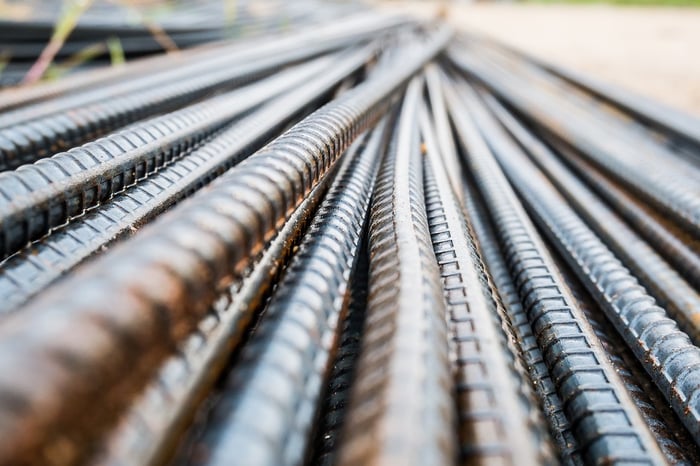 This helped Nucor deliver 18% gross margin, up from 13.7% last year. Higher margin more than offset higher marketing and administrative expenses, while interest expense declined by one-third. The result: Earnings more than doubled year over year to $2.13 per share, from last year's $1.00 per share.

Higher prices and volume are delivering huge cash flow growth as well. The company said that operating rates -- a measure of efficiency -- increased to 95% in the quarter, up from an already strong 92% in the first quarter, and sharply higher than last year's 89%. The combination of higher prices and increased operating efficiency from its manufacturing facilities is generating substantially higher operating margin. In the first six months of the year, Nucor's operating cash flow more than doubled from $351 million to $871 million year over year.

Margins and earnings growth have also been products of Nucor's strategy to expand its business where there is the most demand, and where its high-quality operations can be a differentiator. While many of its peers have struggled over the past decade (at least before recently enacted tariffs gave them hope) Nucor has invested over $8 billion to expand its operations, mainly via strategic acquisitions that have added to its capabilities. This is also one of the factors playing a role in Nucor's big profit surge.

Nucor isn't just sitting back and expecting the good times to roll on. The company has announced plans to invest almost $500 million to build a rebar micro mill in Florida and a galvanizing line at its sheet mill in Arkansas. It will take several years for these projects to be complete, but as acquisition prices have increased, management has shifted its investment focus to internal projects, and not overpaying to acquire assets.

The company's balance sheet remains very strong. Cash and equivalents were $1.49 billion at quarter-end, up a whopping $500 million since the beginning of 2018. Working capital has increased sharply this year, with current assets up $1.6 billion, and current liabilities down $75 million. Long-term debt is up about $1 billion to $4.2 billion, though interest expenses continue to remain quite low as a percentage of debt.

Management continues to be optimistic about the near future. The company said end-customer demand remains strong, even as steel prices have increased due to a spate of tariffs enacted on imported steel earlier this year. At the same time, the U.S. economy keeps plodding along, though the newly enacted corporate and personal income tax cuts haven't yet proven they will provide any additional boost.

In the earnings release, management said it expects the results "to further improve compared to the second quarter of 2018," with further margin expansion from the sheet and plate mills. Management credits "sustainable strength in steel end-use markets" as likely to drive sequential improvement in the second half of the year.

The steel market will invariably turn soft again at some point, but right now demand is strong and steady, and a decade of big investments in building a stronger Nucor is starting to pay off with big profits.