Why do so many of us have a tough time saving money? There are a couple of very obvious -- and popular -- responses: unequal wealth distribution, stagnant wages, and student-aid debt that's shackling an entire generation of college graduates.

Without taking anything away from those legitimate causes, we often ignore the thing we have the most control over: our own spending. It feels good to blame others. It is psychologically depleting to admit our own mistakes. So we over-emphasize the things out of our control, and ignore those within it.

That's a shame, because the very act of owning mistakes can lead to powerful changes down the road. That's why I want to highlight the one trick that's helped my family save the most money over time: setting aside one month per year where we pay for (almost) everything in cash -- and tracking those expenses. 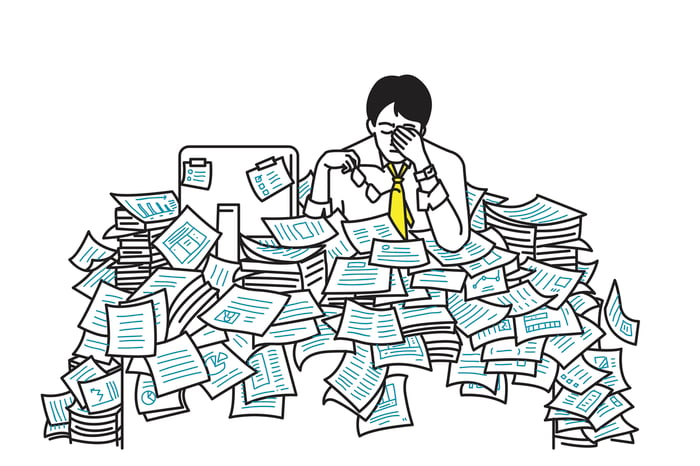 Tracking your spending can feel like this. Image source: Getty Images

Before diving into the nitty-gritty, let's review a couple of examples from outside of finance.

Two years ago, I felt groggy and tired on a regular basis. Was the problem diet, exercise, something else? I bought a Fitbit Surge Two. The gadget is able to track a lot of features; one of them is your sleep. Unlike the other features, tracking sleep was a pain -- I found wearing the watch in bed to be a pain that probably lowered the quality of my sleep even more.

Nonetheless, for two weeks, I tracked everything -- the amount I worked out, my idle time, and my sleep. When I looked at the data, I saw that my sleep was better when I wasn't idle for longer than an hour, got 30 minutes of moderate exercise, and (surprise, surprise) went to bed before 10:30 p.m.

For the next two weeks, I tried accomplishing all three of these things, and the average amount of sleep I got improved by more than a half hour. It was a noticeable difference. I don't track my sleep on a regular basis now -- like I said, it was a pain -- but much of the improvement has stuck.

I've done similar things in the past with eating -- I was 250 pounds when my football career ended in college and I needed to lose weight fast -- with similar results. There was the pain and drudgery of tracking behaviors, followed by reflection, followed by steps that made a lasting difference.

That brings us to the trick to help you save money: paying for (almost) everything in cash, and tracking that spending. This isn't a fun exercise, but it is eye opening. Once a year, at the beginning of the month, my wife and I follow these steps:

After two weeks of this, my wife and I sent our daughter to spend a night at her grandparents for a romantic night of... budget review!

The most recent review was eye opening for us: We were eating out and spending more on groceries than we ever would have guessed. We also saw that we were spending a ton on utilities by having the air conditioning on in the summer. (We deposited a sum equal to our utility bill in our bank account to experience the "pain" of this payment.)

We spent the next two weeks trying to remedy those patterns. We had moderate success, but there's little doubt we save more money now. For the other 11 months, we simply keep a spread sheet that tracks our overall trends. If we have more money going out than we expect, that's a sign that we need to see what's causing it.

Nobel laureate Daniel Kahneman developed a theory that humans make decisions using two systems. System 1 is automatic and fast -- it doesn't rise to the level of consciousness; System 1 helps you decide where to sit in a restaurant, or which cereal to buy at the store. System 2 is slow and deliberate -- it helps you choose where to buy a new house or make your next investment.

As behavioral economist Dr. Hersh Shefrin described in an interview with LearnVest:

The way most of us operate is that our System 1 finds stimulus response patterns that work and, in the process, we get good at habits through repetition. It's like digging a groove. The more you do it, the deeper the groove. And the deeper the groove, the harder it will be to get out.

The one month of tracking your spending elevates the automatic, stimulus-response System 1 decisions to your System 2. Once there, the pain and pleasure you experience from your financial decisions become fused, and help you make better decisions.

So, if saving money is a long-term goal, fire up your spreadsheet, hide your credit cards, pull out a bunch of money from the bank, and prepare to change your behaviors. Over the short run, it won't be fun. Over the long run, it could be life-changing.

1 Trick to Actually Save Money @themotleyfool #stocks Next Article
Current