Believe it or not, there's actually a retail market that Amazon.com (NASDAQ:AMZN) may not be adequately equipped to serve: home goods.

That gap has provided a tremendous growth opportunity for Wayfair (NYSE:W), one of the largest online sellers of furniture and decor.

Over the last 15 years, Wayfair has grown from nothing to a $5.1 billion business -- an impressive feat considering that over the same period Amazon has been growing rapidly and eating brick-and-mortar retailers alive. Clearly, Wayfair found a niche it could exploit selling home goods online that Amazon hasn't been able to touch.

Ironically, the reason for Wayfair's success might be found in a strikingly similar managerial approach between its founders and Amazon's founder and CEO, Jeff Bezos. 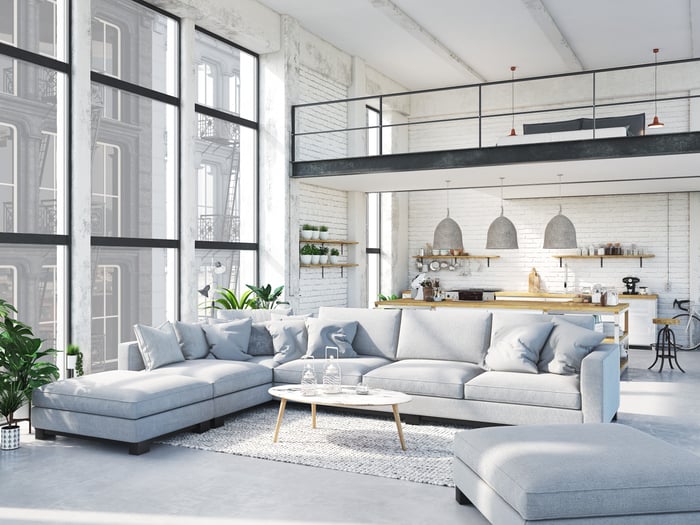 One similarity between Wayfair and Amazon is that founders of both companies had no prior experience to retail before starting their respective businesses. This may feel like a disadvantage, but in hindsight, it was very beneficial in that it gave both entrepreneurs a fresh perspective on how to do retail.

Most of the early employees at Amazon were software engineers. Wayfair was formed from a similar mold. Founders Niraj Shah (who serves as CEO and co-Chairman) and Steve Conine (co-chairman) both studied engineering at Cornell and worked in technology consulting before starting Wayfair. Similarly, Bezos worked in finance in New York before starting Amazon.

Both companies started doing something very simple, that later snowballed into rapid growth. Amazon started out doing the unthinkable in the 1990s -- selling books online. Wayfair started out selling stereo racks and stands. Humble beginnings have led to massive market opportunities for both companies. 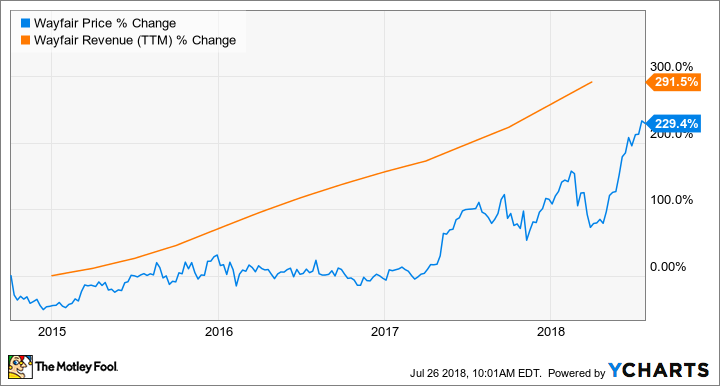 Shah and Conine's engineering and tech background has been engrained in Wayfair's operations in how the company relies on data to manage inventory, supply chain logistics, as well as advertising. Management believes this gives them a competitive advantage, and they credit their data-centered approach for the company's exceptional growth in recent years.

Focused on the long term

While Wall Street focuses on quarter-to-quarter results, Wayfair's co-founders own a combined 84% of the company, which allows them to ignore the short term noise and remain focused on making decisions that will maximize the company's business value over the long term. Similarly, Bezos is the largest shareholder of Amazon, owning about 16% of the shares.

Like Bezos, Wayfair's founders are willing to report a loss on the bottom line in order to invest heavily to expand inventory selection and build the infrastructure needed to satisfy customers with fast delivery. As far back as 2012, Wayfair has not reported a profit, but this doesn't mean the company's spending is out of control.

In the early years, Wayfair grew out of its cash flow. And a year before the company went public, in 2013, the balance sheet showed zero debt and $115 million in cash and short-term investments, reflecting a company that had grown within its means without taking on a lot of debt to finance growth.

Wayfair did take on some debt last year, which stood at $337 million at the end of the first quarter, but there's also about $582 million of cash and investments to more than offset this.

Selling home goods means Wayfair has a much more limited ceiling compared to Amazon, which sells everything under the sun. But the home goods market still provides Wayfair a huge market to grow into.

Wayfair estimates its total addressable market globally to be about $600 billion -- pretty massive next to Wayfair's trailing 12-month revenue of $5.1 billion. Online sales comprise only 12% of the U.S. home goods market, but as with other retail markets, more home goods spending is transitioning to online, and Wayfair is capitalizing beautifully.

Total revenue has exploded 10-fold since 2011. Active customers are also growing rapidly, from 2.4 million in 2014 to nearly 12 million in 2018. And 65% of Wayfair's orders are from repeat customers, which has been steadily increasing and is an important indicator that the company is definitely offering a level of selection and service at a price level that can't be beat... even by Amazon.

Build it, and the profits will come

Wayfair is spending heavily on its delivery network and advertising, which is largely why its not reporting a profit right now. Management is following the same playbook as Amazon by gradually building shipping facilities around the U.S. and internationally in order to beat competitors to the punch.

It seems management is not so much investing heavily in its infrastructure to create growth, but, instead, to catch up to growing demand. And that's a great sign for investors.