Shares of Hostess Brands, Inc. (TWNK 0.67%), a producer of sweet baked goods with brands including Twinkies, Zingers, Sno Balls, Ding Dongs, and many more, are down 17% as of 10:36 a.m. EDT Wednesday after the company's second-quarter results fell short of estimates.

Hostess' second-quarter net revenue increased 6.2% to $215.8 million, compared to the prior quarter, but the second quarter also included a $20.8 million contribution from the Chicago baker it acquired during the first quarter of 2018 -- the top-line missed Wall Street estimates. Adjusted earnings per share was $0.14 during the second quarter, falling short of the prior year's $0.17 per share and below analysts' estimates calling for $0.18 per share. 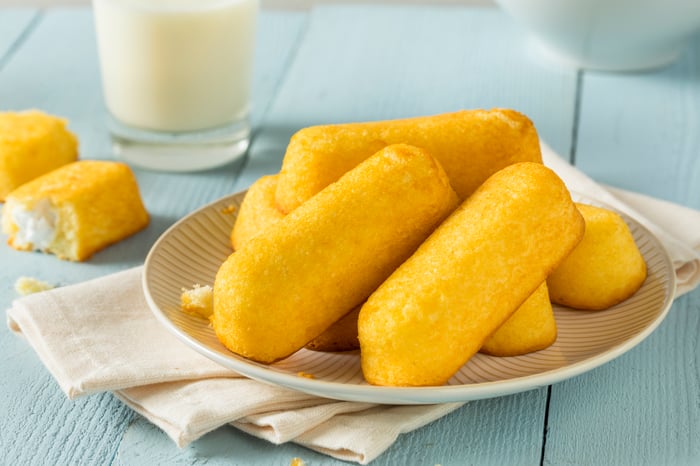 "During the second quarter I was pleased to continue to see overall point of sale and market share growth ahead of the SBG category giving us confidence in our growth potential moving forward," said President and Chief Executive Officer Andy Callahan in a press release. "The overall growth was reduced by meaningful and larger than anticipated reductions in both promotional support and associated retail inventory from one of our largest retail partners."

It was a tough quarter for Hostess with pressure on many of its financial metrics, including adjusted-EBITDA margins that declined from 31.1% of net revenue during the prior year to 22.1% during the second quarter. Part of that is due to the acquired Chicago baker operating at negative margins as Hostess transforms the bakery. The company's financials also reflected headwinds from increasing transportation and other supply chain costs. Management is working on a strategy to raise prices to help offset rising costs, and Hostess believes it will improve its results during the back half of 2018 and into 2019.

Why Hostess Brands Stock Jumped 10% at the Open Today

Hostess Sticks Its Hand in the Sugar-Free Cookie Jar