One of the big stories in the oil patch over the past few months has been the critical shortage of pipeline capacity coming out of the Permian Basin due to the region's explosive production growth. While the lack of capacity has proven a problem for those drillers that failed to lock up contracts for enough pipeline space, it has been a boon for those companies that have room to spare. The infrastructure crunch has also enabled companies with pipeline assets in the area to cash in -- which is what Apache (NASDAQ:APA) and Occidental Petroleum (NYSE:OXY) recently did.

Selling for a top dollar price

Last month Reuters reported that Occidental Petroleum had put several of its midstream assets on the block, including those in the Permian Basin, in hopes of fetching premium valuations. That's exactly what happened, as it secured two separate but related private buyers for those Permian assets. In one deal, the company sold its 3,000-mile Centurian pipeline system -- a large-scale integrated gathering and oil storage network that includes a major pipeline to move oil out of the Basin -- as well as its smaller, 50-mile Southern New Mexico gathering system. In the other transaction, it sold its stake in the Oxy Ingleside Energy Center, which is a storage and export terminal near the Corpus Christi Ship Channel. 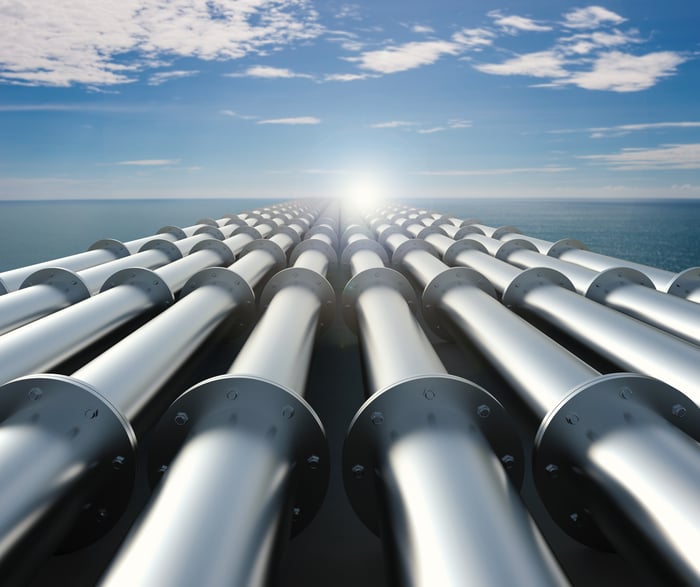 Overall, Occidental Petroleum will receive $2.6 billion for these assets, which is an excellent return considering that they generated about $180 million in EBITDA last year, giving the deals a valuation multiple of more than 14 times EBITDA. Generally, midstream assets tend to fetch eight to 12 times EBITDA. Occidental Petroleum plans to use the proceeds to buy back more than $2 billion of its stock over the next 12 to 18 months, and accelerate the development of its Permian Basin drilling program.

Realizing a premium for creating a regional pipeline powerhouse

Apache, too, has been looking at monetizing its midstream business in the Permian Basin, which it has been building from scratch. Though the second quarter of this year, the company had invested $900 million into constructing gathering pipelines, processing plants and the like so that it can develop its Alpine High discovery. In addition, the company secured  options to purchase stakes in five long-haul pipelines currently under development that will move its output out of the region:

In the process, Apache has created a fully integrated midstream company that has turned out to be very valuable. That's evident by the deal it struck with Kayne Anderson Acquisition Corp., which values Apache's midstream business at a stunning $3.5 billion, more than 15 times its projected EBITDA run rate at the end of 2019. As part of the transaction, Apache has agreed to contribute its midstream assets as well as those pipeline options to Kayne Anderson Acquisition in exchange for a 71% stake in the company, which will change its name to Altus Midstream. The company will have $952 million in cash at closing, all contributed by Kayne Anderson, which will provide it with a portion of the capital needed to continue expanding Apache's midstream assets. Altus also plans to use its retained cash flow over the next few years as well as new debt to fund the rest of the build out of the wholly owned gathering and processing assets, and to exercise the options for all those the long-haul pipeline stakes.

Picking the perfect time to cash in

Apache and Occidental Petroleum pounced on the opportunity to monetize their Permian midstream assets amid the region's current pipeline crunch, which shined a light on the value of these assets to the region's future. Because of that, they were both able to fetch premium prices for their assets, which should make their stock much more valuable in the eyes of investors.