Shares of defense contractor Kratos Defense & Security Solutions, Inc. (NASDAQ:KTOS) jumped 12.3% in July, according to data provided by S&P Global Market Intelligence, after announcing a number of new military contracts. These may have been business as usual, but investors were happy to see bookings come in strong last month.

There were a number of contracts and partnership announcements, but three were most notable for investors. 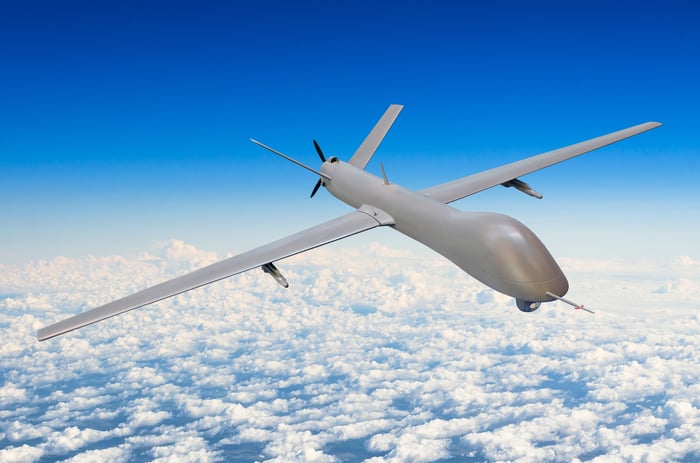 Kratos was awarded an additional $38.6 million task order in support of the Royal Saudi Naval Forces, bringing its total order to $62.6 million. Services of the contract include surface operations and maintenance, damage control, and English language training.

A strategic partnership with Colas Ltd. and Royal Truck & Equipment in the United Kingdom was announced, intending to bring an unmanned autonomous impact protection vehicle to the market.

The big win was a contract for unmanned aerial drone systems with the Air Force for up to three years and $109 million. In fiscal year 2018, $27 million is expected to be received by Kratos.

Kratos's shares got a little more volatile early in August after reporting second-quarter 2018 results. The big news was that revenue is expected to grow from $603.3 million a year ago to $640 million-$650 million with earnings coming in at $0.15 to $0.19 per share. The earnings target was on the low end of what analysts expected, which could put pressure on shares if the company doesn't hit the high end of its revenue and earnings range in the second half of the year.