Shares of United States Steel (NYSE:X) plunged 18.5% in August, according to data from S&P Global Market Intelligence. The steelmaker announced its second-quarter earnings on the first day of the month, but there's more to the stock's drop than just the numbers.

U.S. Steel's Q2 numbers came in better than expected. Not only did the company beat estimates on its top and bottom lines, but it also upgraded its full-year outlook for adjusted EBITDA (earnings before interest, tax, depreciation, and amortization). U.S. Steel now expects to earn $1.85 billion-$1.90 billion in adjusted EBITDA versus its previous guidance of $1.7 billion-$1.8 billion, thanks primarily to firmer steel prices. Prices have soared after President Trump slapped tariffs on steel imports to boost local production. 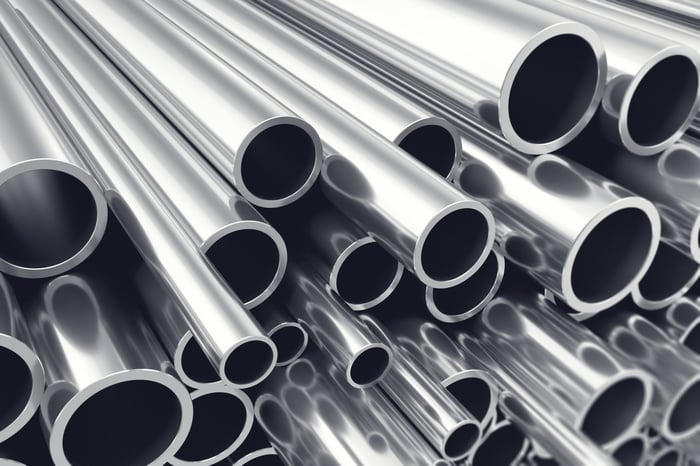 The market didn't like the numbers, though, and U.S. Steel shares crashed 10% on Aug. 1 and continued to be under pressure as the month progressed. Analysts were expecting higher EBITDA numbers given the strength in steel prices, but a muted upcoming third quarter for the company, thanks to a planned outage at its Great Lakes facility, dampened hopes.

The outage is part of U.S. Steel's ongoing revitalization program that aims to boost productivity and cut costs. However, what didn't go down well with investors is that the company is burning cash on reviving its plants at a time when rivals were already prepped up to cash in on higher steel prices. Blame wrong decisions at the wrong time. So while U.S. Steel's bottom line is in better shape thanks to improving steel markets, it isn't generating as much in free cash flows.

All's not lost for U.S. Steel, though. The company is ramping up production, and its debt profile looks much stronger than until a couple of years ago.

That said, U.S. Steel still has nearly $1.5 billion worth of capital spending lined up for 2019 and 2020. If demand for steel and steel products, meanwhile, fails to sustain or the impact of tariffs frays, the company will have a harder time churning out profits.