Tilray (NASDAQ:TLRY) isn't just a marijuana stock. It's a super-marijuana stock that's faster than a speeding bud-shaped bullet, more powerful than a cannabis-fueled locomotive, and able to leap tall greenhouses in a single bound.

Some investors might think this description rings true considering Tilray's shares have skyrocketed more than 600% since its initial public offering (IPO) in July and more than 425% in just the past month. Heck, Tilray has jumped close to 50% since last week.

But enough is enough. It's time for a reality check about Tilray. 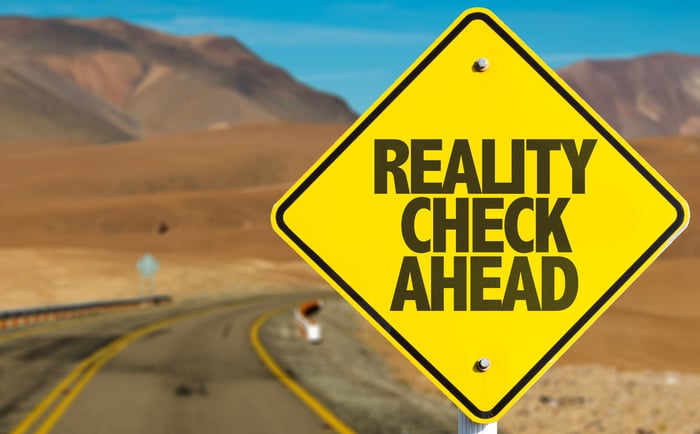 The numbers don't add up

Let's start first with a straightforward comparison between Tilray and Canopy Growth (NASDAQ:CGC). Until a few days ago, Canopy claimed the largest market cap of any marijuana stock. Now Canopy trails well behind Tilray with a market cap of "only" $11.9 billion.

Canopy Growth is on track to have licensed growing space of 3.2 million square feet. Tilray expects to have 912,000 square feet of growing space by the end of this year. That's right -- Canopy's production capacity is roughly three times greater than Tilray's.

Canopy is flush with cash thanks to a $4 billion investment from major alcoholic beverage maker Constellation Brands. The two companies are working closely to develop cannabis-infused beverages. Tilray has a deal with Novartis' Sandoz subsidiary for medical marijuana products, but nothing in ink with any major player for the much larger recreational cannabis market. And the Sandoz agreement didn't generate a huge amount of cash for Tilray like the Constellation deal did for Canopy.

But some might argue that Tilray is the first to win approval to market both cannabis flower and cannabis oil products in Germany. Tilray also just received a green light to supply medical cannabis for a U.S. clinical study. Are either of these bragging rights enough to make Tilray worth $3 billion more than Canopy? I don't think so.

By any objective standard, Tilray should not be trading at a higher market cap than Canopy. But it is. However, I think the issue goes well beyond a side-by-side comparison with Canopy.

Arcview Market Research and BDS Analytics project that the global marijuana market will total $32 billion by 2022. They didn't just pull this number out of the air -- it reflects significant analysis and research into current markets and their likely growth over the next few years. What's more, though, is that Arcview and BDS Analytics think that most of this market will be in the U.S. -- a market that Tilray isn't competing in and won't compete in unless U.S. federal laws change.

That leaves $8.6 billion of total marijuana sales outside of the U.S. for Tilray to target -- over three years from now. Let's be generous and assume that the company manages to grab 20% of that market. If Tilray achieves this, its price-to-sales ratio would be 8.7. That's a nosebleed level that still requires quite a few leaps of faith to avoid being much higher. Based on reality, the numbers simply don't add up for Tilray.

So is it time to short Tilray like it's going out of style? I agree with the view of my colleague Sean Williams that it's not a great idea. As Sean pointed out recently, the borrowing costs for shorting Tilray are astronomical.

There's also the possibility that Tilray's share price could still move higher. Yes, I think Tilray is way overvalued. However, the company could be the beneficiary of good news over the short term that provides further catalysts.

For one thing, the Canadian recreational marijuana market opens next month. If demand exceeds predictions, it wouldn't be surprising for marijuana stocks, especially leaders like Tilray, to enjoy a nice boost.

I also wouldn't bet against Tilray stock jumping on news of a deal with a major company outside of the marijuana industry. Diageo is reportedly in discussions with several Canadian marijuana growers about developing cannabis-infused beverages. Coca-Cola is also reportedly in talks with Aurora Cannabis, which could lead to other non-alcoholic beverage makers following its footsteps. Big tobacco companies are also likely candidates to seek cannabis partners.

The reality for Tilray

My view is that the reality for Tilray the company actually looks quite good. It should see tremendous sales growth from the Canadian recreational marijuana market. Tilray is certainly a major player in international medical cannabis markets, especially Germany, which should deliver even more growth.

But there's a disconnect between the reality for Tilray the company and Tilray stock. The stock's valuation has gotten out of hand. At some point, the disconnect will be resolved. And it probably won't be pretty for investors who are just now jumping on the Tilray bandwagon.