Warren Buffett once famously avoided tech stocks because he claimed to not understand them. However, in the past few years, Buffett's Berkshire Hathaway (NYSE:BRK.A)(NYSE:BRK.B) has made an exception by loading up on Apple (NASDAQ:AAPL) stock.

While Buffett doesn't own an iPhone, he told CNBC last year that he simply liked Apple and believed it would be the first company to hit $1 trillion. His prediction was spot-on as Apple famously hit the $1 trillion valuation mark ahead of Amazon (NASDAQ:AMZN) in early August. 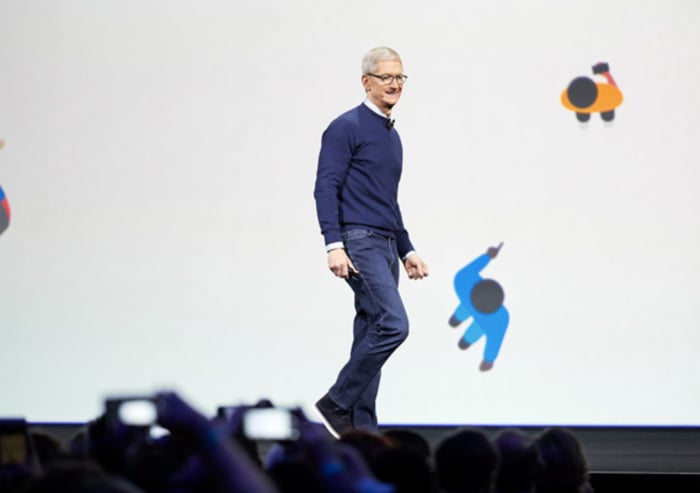 Then, in early 2017, Buffett paid between $116 and $122 per share to more than double his Apple stake to about 130 million shares. And by the end of 2017, Berkshire owned more than 165 million shares of the tech giant. But he wasn't done. In the first quarter of 2018, Buffett added a whopping 75 million Apple shares to the pile. And, finally, in the latest quarter, Buffett added 12 million Apple shares for a total of about 250 million shares, or a $46.6 billion stake, as of June 30.

Some investors have been surprised to see Buffett go all in on Apple after previously speaking out on investing in tech companies. In May, Buffett told CNBC that he would own 100% of Apple's stock if he could. He said that his company buys Apple stock to hold. Specifically, Buffett said he likes Apple's management, Apple's economics, and the way Apple thinks.

Buffett said he made an exception for Apple because unlike other tech companies, Apple makes products that he can understand. During Berkshire's annual meeting this year, Buffett mentioned that he thinks Apple's consumer products have a lot of stickiness.

And he has a point. For the latest quarter, Apple shipped 41.3 million iPhones. While that's basically flat from the third quarter of 2017, the average selling price (ASP) of iPhones jumped to $724, up from $606 a year ago. And the iPhone isn't Apple's only product that's sticking with its customers. Apple also reported over 60% growth in its wearables, while its "other products" sector saw 37% growth year over year in revenue to $3.74 billion.

However, Buffett has also maintained that he doesn't pay too much attention to exact iPhone shipment figures each quarter. He thinks it's not so much how many iPhones that Apple sells, but how reliant people are on them, he told CNBC. That product stickiness means that Apple has millions of people addicted to its product, and it can continue to sell products and services to them for years to come.

Considering Buffett has been upping his Apple stake since he first invested in it back in 2016, I'd be surprised if he suddenly stops. And now that Apple has just released a new line of consumer products, including three new iPhone X models, the era of the iPhone seems far from over. Buffett may never own 100% of Apple like he wants to, but it's safe to say Berkshire will own more than 5% of Apple by this time next year.