Esports, or video games as spectator entertainment, has attracted increased investor interest as of late. With the category posting rapid growth and still in a relatively nascent state, it's not hard to see why. SuperData Research estimates that more than 660 million people worldwide watched video gaming content in 2017, and both viewership and monetization look primed for continued growth.

Chinese video game streaming company Huya (NYSE:HUYA) is a stock that some are looking to as a way to ride momentum in gaming-video content. The company is rapidly expanding its sales. With China already the world's biggest gaming-video market, Huya is on track to be a growth leader for the foreseeable future.

Huya has posted huge gains since being spun off from parent company YY (NASDAQ:YY) in May, nearly doubling its initial public offering price of $12 to put its market capitalization at $4.4 billion. Investors should familiarize themselves with the company and the Chinese esports market before jumping in. 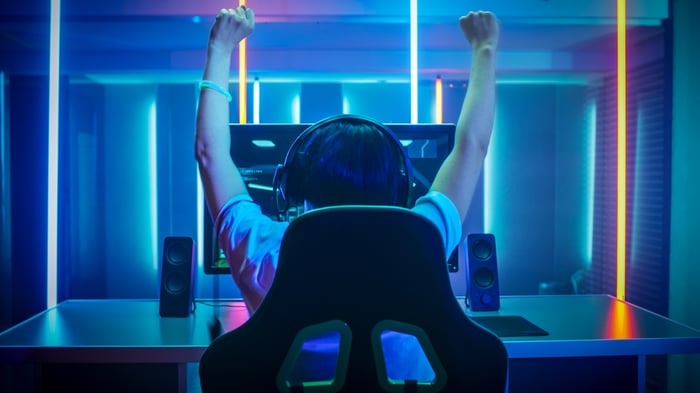 Huya is sometimes called "the Twitch of China" because the company's core content offering is similar to what's found on Amazon's popular streaming platform: namely, people broadcasting themselves playing games. Like Twitch, which the Chinese government recently banned, Huya's platform boasts a large user base and impressive engagement: the company reports that the average user spends 99 minutes a day on the service. Gaming videos look like a category with long-term viability, and there's an encouraging growth environment in China. As a result, the excitement surrounding Huya isn't hard to contextualize.

China counts 800 million people out of its 1.4 billion population as internet users, a tremendous figure that positions it as the world's biggest internet market by far -- and one that still leaves room for massive expansion. The country's large, expanding connected population and fast-growing consumer economy create a favorable backdrop for tech-and-content services, and could help Huya deliver rapid revenue and earnings growth.

A report Huya had commissioned by market researcher Frost & Sullivan estimates total revenue for the Chinese gaming market in 2017 at $32.2 billion and a compound annual growth rate of 13.3% through 2022. The Frost & Sullivan report estimates the country's total esports streaming revenue for this year to come in at $1.2 billion and expects sales to reach $4.9 billion in 2022.

Due to bandwidth costs and other factors, video streaming isn't cheap. However, one advantage that Huya has over platforms like Netflix or iQiyi is that it doesn't have to buy licensing rights or fund production for the vast majority of the content on its platforms. Maintaining a network of streamers comes with its own set of costs and challenges, but the company typically won't be on the hook for expensive projects like films or television series that might wind up flopping.

Gamers are eager to network and share their virtual exploits, and that means that there are hours upon hours of independently sourced content broadcast through the platform on a daily basis. In addition to the chance to be seen, streamers can receive virtual gifts from their audiences, purchased from Huya. The company then shares a portion of revenue from these gifts with broadcasters and associated talent agencies.

The sale of these gifts accounted for roughly 95% of the company's sales last year, with the remainder coming from advertising. YY has already shown that this gift-centric business model can be consistently profitable, and with high interest and engagement for gaming content, there's a feasible path for the offshoot platform to swing to consistent profitability and deliver sustainable earnings growth.

Sales climbed 125% year over year in the company's June quarter, reaching $156.9 million, and monthly active users (MAUs) for the period climbed roughly 10.8% to reach 91.7 million. That MAU growth was well below the 30% average MAU growth the platform saw across 2017, but the company still managed to increase its paying user base by 40.7%.

Huya recorded an operating loss of $2.6 million for the quarter and a non-GAAP operating profit of $8.6 million, as cost of revenue more than doubled due to increased revenue sharing and operating costs rose 155% due to rising marketing and general-and-administrative expenses. With its key infrastructure already in place, Huya should be able to deliver regular profits if growth for operating expenses is less dramatic going forward and its virtual-gift sales and revenue sharing continue to scale at their current balance. Much of last quarter's general-and-administrative spending increase stemmed from share awards and salary raises for management, so that's not an unrealistic expectation. The outlook is even more promising if advertising and other revenue (which grew 138% to reach $7 million last quarter) continue to gain ground.

The biggest risk for Huya is that it won't be able to sustain and grow its paying user base in a cost-efficient way. The success of YY and other streaming businesses built around the virtual-gift model is encouraging, but there's not enough of a track record to make it a safe bet over the long term. It's possible that viewers will lose interest in sending virtual gifts to streamers or that broadcasters will be drawn to other platforms.

Assuming that a favorable outlook for virtual-gift subsidized streaming viewership isn't unreasonable, Huya will still have to compete with Douyu TV, PandaTV, and other gaming-centric platforms for top broadcasting talent and viewership. Both Huya and Douyu refer to themselves as China's top video game streaming platform, and it's not easy to shake out some of the specifics of how the various platforms stack up against one another in terms of engagement.

Some sources put Douyu's MAUs at roughly 200 million, though others offer more conservative estimates. Douyu has also reported having 30 million daily active users --  a metric that Huya doesn't typically report. PandaTV reports having roughly 80 million MAUs.  Without third-party sources to regularly measure viewership or calculate the potential impact of bot networks, it's possible that viewership statistics on some or all of these platforms are inflated.

Huya also faces less direct competition from large, encompassing platforms like Weibo and Tencent's WeChat. On the other hand, Tencent itself seems to betting on Huya's future, having invested roughly $460 million in YY's gaming offshoot to acquire a 35% stake and securing the rights to acquire a 50.1% share in the company between March 2020 and March 2021. Tencent has also invested roughly $630 million in Douyu.

With rapid growth for esports and gaming video content, the Chinese market could likely support more than one successful specialized streaming platform in the space. However, investors should proceed with the understanding that there's limited visibility on some important fronts and it's difficult to predict how the market will shake out. That's even more true when the possibility of regulatory intervention is taken into account.

Moves by the Chinese government to require internet users to sign up for services with their real names have already had an impact on the company's membership growth. Increased scrutiny on online identification and service membership was likely the key contributor to Huya's MAU growth slowing substantially in the company's two most recent quarters. China has put a temporary halt on license approvals for new online games in the country, and it's possible that regulators will create additional roadblocks for gaming companies and streaming platforms.

A less risky way to invest in Huya

While Huya has seen its share price skyrocket since its IPO, YY is actually down roughly 25% over the stretch owing to some earnings guidance that the market found disappointing. However, the company is still expected to grow non-GAAP earnings roughly 12% this year and 21% next year. For investors with high risk tolerance seeking maximum gains, Huya could be the more attractive play. Investors who aren't in that category might be better served by investing in the game-streaming offshoot through its more conservatively valued parent company.