From top to bottom, the S&P 500 lost 10% of its value over the past month -- and I get it. That sounds like bad news. But here's the thing about market sell-offs like the one we just went through: As stock prices fall in an avalanche of bad news, they tend to uncover a few gems of value along the way. 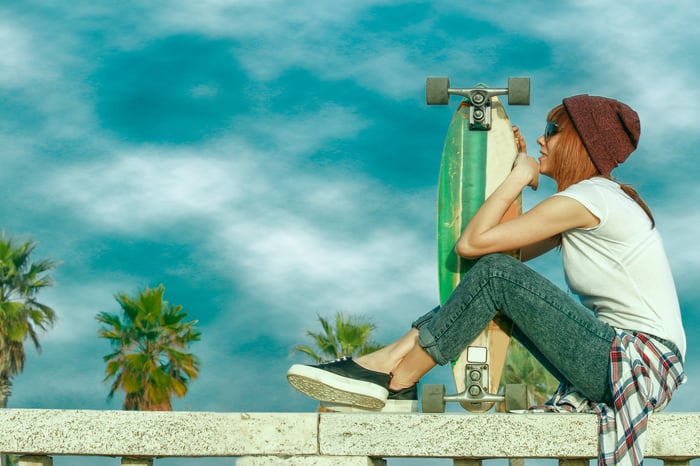 If watching the S&P 500 fall 10% seemed painful to you, imagine how shareholders of sportswear maker Zumiez felt. From a recent peak of $31.25 per share in early September, shares of Zumiez shed 32% of their value through yesterday's close.

Now admittedly, this was partly Zumiez's own fault. On Oct. 10, Zumiez released sales results for the month of September that showed its same-store sales climbing 1.2% in the month -- but its "total net sales" for the five-week period falling 8%, the result of "a shift in the retail calendar negatively impacting fiscal September 2018 growth by approximately $8.0 million." (And even the same-store sales number compared unfavorably in light of the fact that in September 2017, Zumiez had exhibited same-store sales growth of better than 9%.)

Nevertheless, Jefferies is optimistic about Zumiez's potential to outperform in the long term. Calling Zumiez a "quality retailer," Jefferies argues that "international growth [is] scaling and product margins" appear set to grow "beyond their peak," permitting Zumiez to continue growing operating margin for a long time to come. Indeed, already, Zumiez's operating margin has reached 6.4% over the past 12 months, up from just 5% in fiscal 2016, according to data from S&P Global Market Intelligence. And given that as recently as 2013 Zumiez was pulling down operating margin in excess of 11%, it's not inconceivable that it still has room to nearly double again.

Result: Jefferies sees Zumiez rising to at least $28 a share over the next 12 months, and is initiating the stock with a buy today, as reported on StreetInsider.com (subscription required).

Is that price target reasonable? Is Jefferies right to rate Zumiez a buy? I think so, and I'll tell you why.

For one thing, $28 isn't even as much as Zumiez stock was trading for just one month ago. Viewed from the perspective of what some investors were willing to pay for Zumiez in September, a return to $28 actually looks pretty conservative to me.

The more so when you consider that, as Jefferies points out, Zumiez's declining stock price has brought the shares down to near "5-year bottom ... multiples" in valuation. Although Zumiez only reports $33.6 million in trailing GAAP net income, the company's actual free cash flow is $55.6 million -- 68% higher than what it's permitted to report as earnings under generally accepted accounting principles.

Valued on free cash flow, Zumiez stock at a market cap of $559 million costs just 10 times its annual cash profits. Yet, calendar quirks notwithstanding, Zumiez's sales for the first half of 2018 are already up 14% over last year's H1 sales and, with the help of a stronger profit margin, both net profits and free cash flow have arguably improved even more, turning from negative to positive in the year's first half.

Given these trends in sales growth and margin expansion, most analysts who follow the company agree with Jefferies that Zumiez has a bright future ahead of it, and consensus estimates on S&P Global predict long-term earnings growth in the neighborhood of 15%. Assuming those targets are right, Zumiez stock at 10 times free cash flow is a steal of a deal -- and Jefferies is right to call it a buy.

After the Sell-Off, Banker Digs Up a Gem in the Retail Sector @themotleyfool #stocks $ZUMZ Next Article
Current