Align Technology (NASDAQ:ALGN) has brought plenty of smiles to dental patients and investors alike over the last few years. The maker of clear dental aligners broke sales records in both the first quarter and second quarter of 2018. But was Align able to keep the momentum going in the third quarter?

The company answered that question after the market closed on Wednesday, reporting its financial and operating results for the third quarter. Here are the highlights from Align's update. 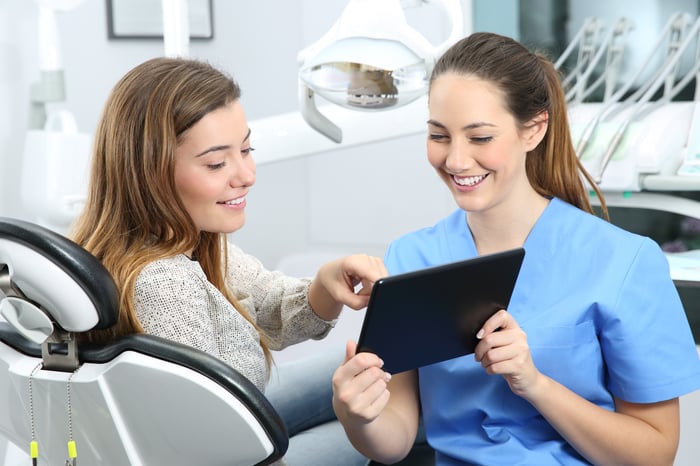 The good news was that Align again achieved record-high sales in the third quarter. It topped the upper end of revenue guidance provided in July. The company also handily beat its forecasted third-quarter EPS of $1.13 to $1.18.

While nearly 85% of Align's total revenue stems from sales of its clear aligners, the company's intraoral scanners business is enjoying especially strong growth. Third-quarter scanner and services revenue soared 79.1% year over year to $78.2 million. This reflected a robust 37.2% increase over the second quarter of 2018.

But there was some bad news for Align this quarter. The company reported clear-aligner sales of $427.1 million, up 25% over the prior-year period but a sequential decline of 1.4%. This drop stemmed primarily from lower average selling prices (ASPs) in the U.S. and internationally. Align stated that the lower ASP resulted from promotional discounts, a shift in product mix, and unfavorable foreign exchange.

I'm pleased to report third-quarter results with revenue and earnings above our outlook driven by higher than expected Invisalign volume -- offset somewhat by lower ASPs and foreign exchange. We also had another record quarter for the iTero scanner business with revenues up 79.1% year-over-year. Q3 Invisalign volume increased 5.5% sequentially and up 35.3% year-over-year reflecting strength across regions and customer channels, as well as strong growth from both teen and adult patients. From a product perspective, we saw strength across the Invisalign portfolio with growth from both comprehensive and non-comprehensive products, reflecting an acceleration in the non-comprehensive category related to expansion of our product portfolio, as well as new sales programs and promotions intended to increase adoption and utilization. We also saw continued strength from international regions, especially Asia Pacific, which was our 2nd largest region after the Americas in Q3.

Align expects fourth-quarter net revenue between $505 million and $515 million. That reflects an increase of 21% year over year at the midpoint of the range but only minimal growth over the third quarter. The company also projects diluted EPS between $1.10 and $1.15 -- lower than the third-quarter 2018 results and EPS from the prior-year period.

There's not much that Align can do about the negative impact of foreign exchange on ASPs. However, the company shouldn't experience the headwinds from promotional programs in the future as it saw in the third quarter. Align's management stated on the quarterly conference call that the promotions weren't related to any competitive challenges in the marketplace.

Invisalign continues to enjoy solid shipment growth. Actually, the momentum was stronger in the third quarter of 2018 compared with the previous quarter than in the same period last year. Align expects fourth-quarter Invisalign case shipments between 330,000 and 335,000, a year-over-year increase of 30% at the midpoint of the range.

The fundamental business prospects for Align Technology appear to remain intact. Align still has opportunities to expand internationally as well as by introducing new products to expand the total addressable market for Invisalign.