Masimo Corporation (NASDAQ:MASI) has been on a roll so far in 2018. The company, which makes noninvasive monitoring technologies, posted great results in the first quarter and in the second quarter. Demand for its pulse oximetry equipment has been exceptionally strong throughout the year.

Any questions about whether or not Masimo's momentum could continue were put to rest on Wednesday with the company announcing its third-quarter results after the market closed. Masimo once again gave investors what they were looking for. 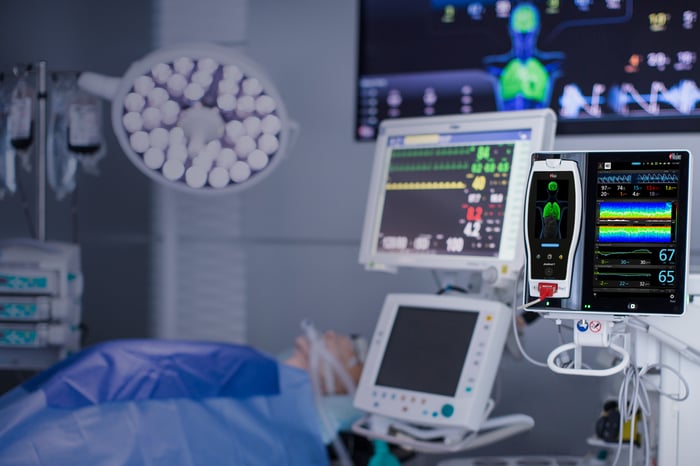 There were two components to Masimo's revenue figure. The bad news was that revenue from royalties fell nearly 37% year over year to $8.5 million. The good news, though, was that Masimo made a lot more money from its noninvasive technology products -- and those sales jumped 12.4% over the prior-year period.

Uncle Sam helped Masimo's year-over-year comparisons quite a bit as well. The company paid around $7.5 million in income taxes in the third quarter of 2017. In the last quarter, however, Masimo received an income tax benefit of nearly $7.5 million.

The company's adjusted earnings per share again soared from the prior-year period. This adjusted growth was lower than that of Masimo's GAAP net income increase, though, primarily due to the impact of excess tax benefits from stock-based compensation.

We are happy to report results for the third quarter that exceeded expectations. Our product revenue increased 12.8% on a constant currency basis to reach $202 million for the quarter. We also shipped a record 59,100 noninvasive technology boards and monitors. Our strong growth is the result of increasing demand for our innovative technologies and systems solutions, which enable our customers to automate patient management across the continuum of care and improve patient safety. We are once again raising guidance for revenue and earnings in 2018 as we continue to grow due to our life saving and life-improving technologies.

As Kiani's comments indicated, Masimo bumped up its full-year 2018 guidance for the third time this year. The company now expects revenue of $854 million, up from its previous guidance of $850 million. Masimo also projects 2018 diluted earnings per share of $3.37, well above the $3.07 estimate provided in its previous outlook.

The company continues to see the payoff from its efforts to improve profitability. Masimo also continues to pick up new customers, with its SET Rainbow pulse oximetry products proving to be especially popular.

Masimo's shares now trade at nearly 38 times expected earnings. Stocks with that kind of lofty valuation can be hit hard when there's bad news. A continuation in the broader market could hurt Masimo, but the company's business prospects appear to be stronger than ever.