Despite the recent stock market volatility, healthcare REIT Omega Healthcare Investors (NYSE:OHI) is trading near its 52-week high -- but it still looks rather cheap by some valuation metrics, and the long-term growth potential is compelling. Here's a closer look at this 7.7%-yielding stock to see if the risks justify the reward potential, or if investors should stay away.

What Omega Healthcare Investors does 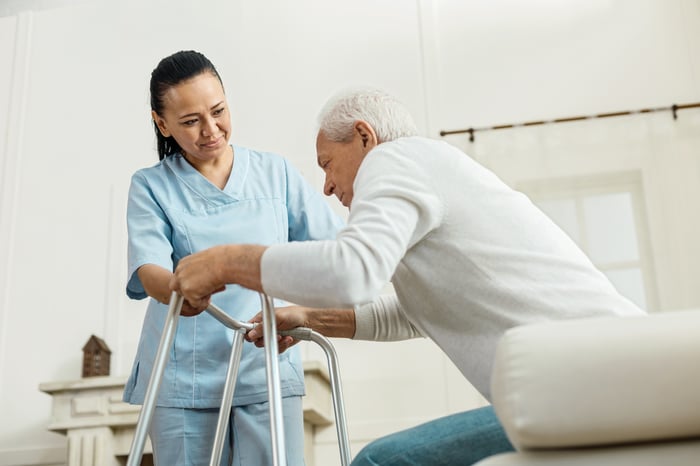 Omega's primary growth mechanism is through acquisitions, of which it has made $6.6 billion worth since 2004. The company issues debt and equity and also strategically disposes of some of its assets in order to fund its growth.

There are a few good reasons to invest in healthcare real estate. For one thing, it's a relatively defensive asset class. In other words, people still need healthcare services no matter what the economy is doing, so recessions shouldn't impact healthcare businesses as much as most other industries.

However, the primary reason to invest in healthcare real estate -- particularly senior-focused properties -- is because of the expected demographic shift in the U.S. population. Specifically, the massive baby boomer generation is starting to reach old age (the first boomers turned 70 in 2016), and as a result, the older segments of the population are expected to steadily grow over the next few decades.

Omega is especially well positioned to benefit from the aging population, as the oldest age groups are the fastest-growing. In fact, the 85-and-older population, which is the most likely subset of the population to use skilled nursing facilities, is expected to roughly double in the next 20 years. 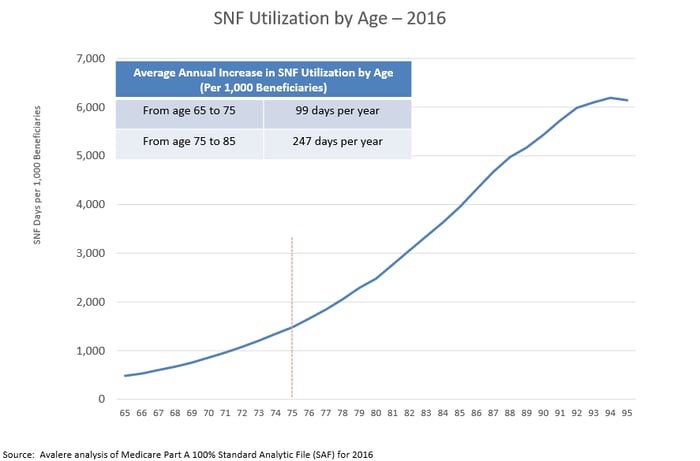 By 2035, demand for skilled nursing facilities is expected to be 142% of the current industry capacity, according to the CMS Nursing Home Data Compendium, so it's fair to say there will be a lot of demand for new properties between now and then.

Over its history, Omega Healthcare Investors has done a great job of delivering returns for shareholders. Funds from operations, or FFO, has increased at a 10.3% annualized rate since 2004, which has allowed the company's stock to roughly triple in that nearly 15-year period. And, the company has been able to steadily increase its dividend, with 10-year total dividend growth of 120%.

No stock with a massive dividend yield and long-term growth potential is without risk, and Omega Healthcare Investors is certainly no exception.

For one thing, skilled nursing and assisted living facilities are relatively unpredictable when compared with other types of healthcare real estate. Specifically, a substantial amount of these properties' revenue comes from government reimbursements like Medicare and Medicaid, which are typically less stable than healthcare revenue from private-pay sources. For example, if Medicaid reimbursement rates are cut dramatically, Omega's tenants could suffer and some could potentially go bankrupt.

There are a number of other risks as well. As interest rates rise, for example, it increases Omega's borrowing cost. Plus, rising rates tend to pressure REITs overall. There's also the risk of oversupply in the industry, or that one of Omega's major tenants could face financial difficulties and be unable to pay rent (the top 10 tenants make up over 40% of the company's revenue).

Omega Healthcare Investors pays a $2.64 annual dividend in quarterly installments. Based on the current stock price, this translates to a yield of about 7.7%. This is quite high by most investors' standards.

Omega expects its full-year adjusted FFO to be in the range of $3.03 to $3.06 per share. Based on the midpoint, this implies an FFO payout ratio of about 87%. While I wouldn't exactly call this alarming, as REIT payout ratios are often high, it's definitely on the upper end of the spectrum, even for a REIT. In other words, there isn't that much wiggle room for revenue to drop.

On a valuation basis, Omega trades for just 11.3 times FFO, which is a very cheap valuation. This is likely because of the rather unpredictable nature of the skilled nursing business, the company's relatively high use of leverage, and risk of a dividend cut if revenue drops significantly.

The bottom line is that while Omega Healthcare Investors is a cheap stock for a reason, that doesn't mean it's a bad value. While it's important to understand the risks before buying the stock, if the next few decades are as good for the healthcare industry as the demographic trends suggest, and Medicare and Medicaid reimbursements don't change much for the skilled nursing industry, Omega could deliver market-beating returns.

In a nutshell, this is a relatively high-risk/high-reward REIT, but it could be a smart buy for long-term investors who are willing to ride out the ups and downs along the way.