Hipsters may continue soaking their beards in their favorite beer, as Pabst Brewing and the MillerCoors division of Molson Coors (NYSE:TAP) have negotiated a last-minute settlement to their increasingly acrimonious contract brewing dispute.

The stakes were high because if MillerCoors held firm to its decision to close down the California brewery where it brewed Pabst beer due to declining capacity, as alleged, Pabst would go out of business. But the two sides apparently came together and found a way to ensure PBR could still be found at local bars and packaged goods stores. 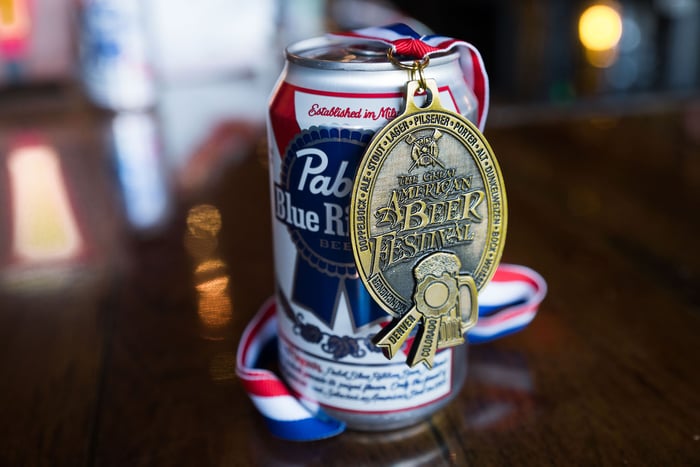 A test of wills

Until last week, though, there didn't seem to be a chance of that happening. Pabst harshly accused MillerCoors of lying about capacity being the problem, instead asserting the brewer was worried about competition. Pabst sued MillerCoors, which in turn said Pabst's claim that it risked going out of business was exaggerated.

After The Motley Fool published an article about the lawsuit last week, a Pabst spokesman sent a statement that said MillerCoors had "willfully breached our 19-year agreement in an effort to stomp out the competition. Even though MillerCoors's market power is much larger than Pabst's, we will not allow this industry bully to push us around. We are confident that the court will see MillerCoors's fabricated 'capacity' concerns for what they are: a thinly veiled, bad faith attempt to unlawfully hurt a competitor."

It certainly didn't sound like a case where a middle ground could be found, but after two weeks of testimony and two days of juror deliberations, MillerCoors and Pabst did just that. While they haven't released the details of their settlement, MillerCoors said all the bones of contention between the two had been dealt with, and Pabst rejoiced, saying PBR will be around "for many, many years to come."

Both sides at risk

We, of course, don't know who blinked in this test of wills, and leaving your fate in the hands of jurors can be risky, but MillerCoors has industry data and its own performance on its side to show that beer consumption is down broadly and consolidation has long been the name of the game in brewing. Pabst, not wanting to risk going out of business, may have agreed to pay what it had previously deemed to be exorbitant per-barrel brewing rates or to lease the facility at a high price to brew the beer itself.

Yet Pabst also said it had obtained "stunning documents" that proved MillerCoors wasn't worried about capacity but was simply trying to put it out of business, and earlier this year the trial judge seemed skeptical of MillerCoors's position. The brewer might not have wanted to risk the jury finding it at fault and penalizing it.

Regardless of the outcome and despite all the fanfare of its hipster revival, Pabst still has to contend with falling demand.

In 2016 Pabst signed a contract brewing agreement with Craft Brew Alliance (NASDAQ:BREW) to brew Rainier Pale Mountain Ale for its Rainier Brewing subsidiary at Craft Brew's brewery in Woodinville, Washington. There was also a three-year option to purchase the facility. After almost 18 months, however, the agreement fell apart as Pabst was unable to meet certain volume forecasts and ended up paying $6 million in combined contract termination and brewing shortfall fees. Craft Brew ended up selling the brewery.

Amicably resolving disputes is always the preferred outcome, and both Pabst and MillerCoors at least publicly seem satisfied with the settlement. But there is still likely a sunset provision in the new arrangement, and Pabst will need to go against the industry tide and grow sales so that MillerCoors will want to extend the contract in the future.