Too many planes and not enough passengers: That's Hawaiian's problem in a nutshell.

Wall Street was closed on Wednesday in memory of President George H.W. Bush. That's why, although Hawaiian Holdings ( HA -1.35% ) issued an earnings warning yesterday morning, it's only today that investors are getting a chance to react to it -- and reacting they are, in spades.

Hawaiian shares are down a good 12.8% as of 12:45 p.m. EST in response to news that weak pricing and weak demand for air travel to the Hawaiian islands may be weighing on the airline's revenue haul for the year's fourth and final quarter. 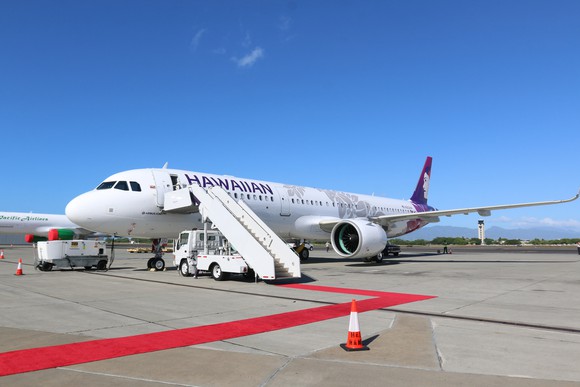 Hawaiian advised that in the month of November, total "guests" carried on its airplanes declined by 0.8% year over year. Total traffic ("revenue passenger miles") still managed to eke out a 2.8% increase, however, because Hawaiian was adding extra capacity at the same time in anticipation of greater traffic growth, the company's "load factor" (the percentage of all seat-miles available to carry passengers that were actually serviced) declined by 180 basis points in November, to just 84.1%.

Translation: Too many planes and too few passengers resulted in more empty seats failing to generate revenue for Hawaiian.

Although November is just one month of Hawaiian's fiscal fourth quarter, the airline nonetheless decided to update investors on its expectations for the quarter as a whole. As of today, with Q4 two-thirds complete, Hawaiian is predicting that its revenue per available seat mile (RASM) will decline as much as twice as previously forecast, and will range from 3% to 5% below the company's RASM from Q4 of last year.

Management did not give specific revenue and earnings guidance for the quarter, but because it is also warning of weaker pricing on Hawaiian routes in addition to weaker-than-expected demand for travel to Hawaii, the implication would appear to be that revenues and earnings could both fall short of estimates.

For what it's worth, Wall Street was at last report expecting Hawaiian to earn $1.09 per share on about $709 million in sales for Q4 -- but we'll probably have to wait till the end of next month to know exactly how far short of that mark Hawaiian will fall.