The United Nations' Intergovernmental Panel on Climate Change recently released an urgent report that should serve as a wake-up call. (Actually, it's more the equivalent of a slap in the face). The upshot: If humanity doesn't act fast to stop global temperature rise, we could see truly terrible effects of climate change as soon as 2040. The world economy needs to shift at a scale and speed that the authors say has "no documented historic precedent."

If greenhouse gas emissions continue at their current clip, we could experience a 2.7-degree Fahrenheit warm-up by 2040, according to the study. Flooded coastlines, mass die-off of coral reefs, increased droughts, wildfires, food shortages, and, of course, resultant poverty and human suffering make the laundry list of negative effects we could see in as little as two decades' time in that scenario.

Meanwhile, for those who prefer to think in terms of dollars and cents, the report's authors provided some prognostications. They estimated that 2.7 degrees of warming would result in $54 trillion in damage, and if the atmosphere warms 3.6 degrees and beyond, that would increase to $69 trillion.

An unprecedented level of economic transformation is a tough ask. The idea that we literally have no more time to waste doesn't play well with the fact that the political climate at the federal level makes American action through policy writ large look like a tragically remote possibility. 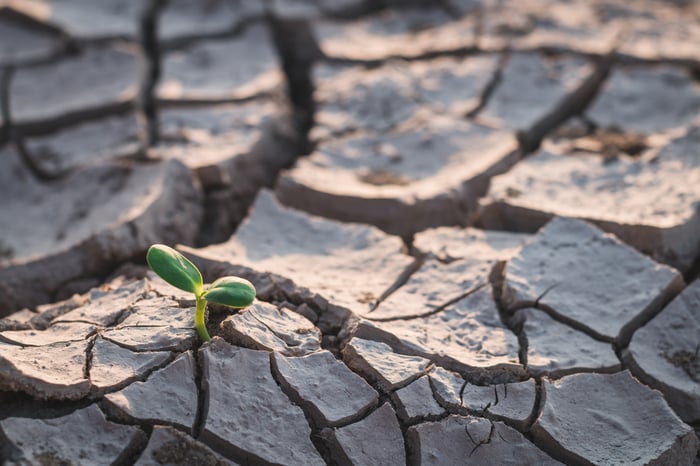 The smart money addresses the problem

As tempting as it may be to panic or despair, though, I try to remember that at least there are pretty powerful forces that are still working to make progress in fighting climate change. For example, many state and local governments have been picking up the slack.

California is probably the most impressive current examples from that sphere; Gov, Jerry Brown recently issued an executive order committing the state (the fifth largest economy in the world) to cutting its net output of greenhouse gases to zero by 2045.

Meanwhile, as ironic as it might be given that industry and the cult of "shareholder value above all other considerations" have played a major role in putting us in this predicament, many modern business leaders and some renowned shareholders recognize the current danger and are taking action.

BlackRock, Vanguard, and State Street are among the giant investors pushing for better environmental policies at corporations, and increasing numbers of influential shareholders are divesting from fossil fuel companies (investors representing $6 trillion recently committed to do so), sending a powerful message -- so powerful that this divestment movement has started appearing in the risk factors of oil companies' SEC filings.

Increasing numbers of businesses report on their emissions progress and other environmental metrics in detailed sustainability reports. Specifically, the Governance & Accountability Institute reported that 85% of S&P 500 companies issued sustainability or corporate responsibility reports in 2017, a huge increase from less than 20% in 2011. Many companies have signed on to official climate-change-fighting commitments, too, joining organizations such as the We Are Still In, We Mean Business, and RE100 coalitions.

What can individuals do?

There are things we as individuals can do, too. We can be thoughtful about our driving and air travel, curtail our meat consumption, look into renewable energy options for our homes, and so forth. As individual investors, we can double-check our stocks to make sure our companies are trying to be part of responsible change. We can also be on the lookout for shareholder resolutions related to climate change during proxy season, and vote in favor of climate-friendly proposals.

I could close this article with some data to reassure folks that investing in an environmentally friendly manner doesn't necessarily mean investors will lose money and that they can even make money following this path. That's true and I've written about it plenty of times, but in light of the UN's report, I think there's only one point to make right at this moment: If our society doesn't do its part in putting the brakes on climate change, it is in effect divesting from future health, well-being, and prosperity. Real leaders in business and investing understand exactly what's at stake.