A strong fourth quarter capped a big turnaround year for Chart Industries Inc (NASDAQ:GTLS). The company announced fourth-quarter and full-year 2018 results on February 14, reporting sales growth in all of its segments, lower operating costs, and increased profits when adjusting for some non-recurring items. The company also closed on two big deals in the quarter, one to unload its healthcare equipment business, CAIRE Medical, and another to buy a "bolt-on" addition in VRV Group, which makes and sells complimentary products that will augment Chart's core business nicely.

With order activity remaining high early in 2019 and the addition of VRV Group now complete, management is very optimistic about Chart's prospects. Let's take a closer look at the results, and what we can expect going forward. 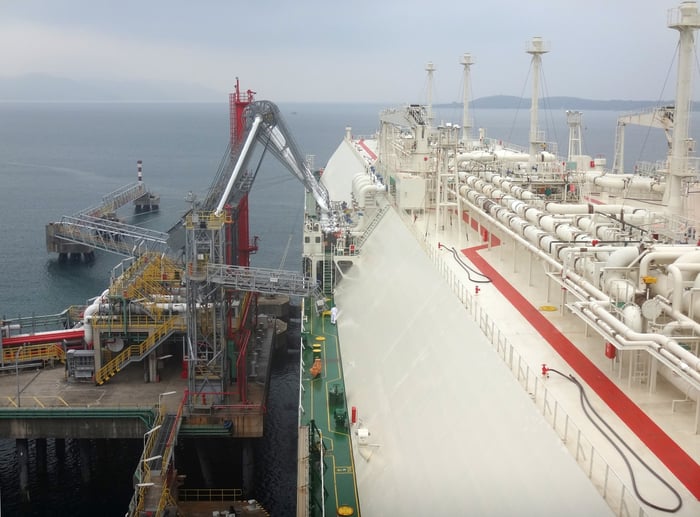 The growth in LNG exporting is one factor in Chart's favor heading into 2019. Image source: Getty Images.

In order to more accurately display its results, Chart excluded results from CAIRE Medical (the divestiture was completed during the fourth quarter). As you can see, Chart ended the fourth quarter on a solid note, with strong sales and double-digit growth in orders. However, you'll also note that earnings from continuing operations fell almost 36% in the quarter, and gross margin compressed slightly.

This resulted in the adjusted, non-GAAP -- generally accepted accounting principals -- earnings per share number the company offered, which shows a substantial 146% increase year over year. In the fourth quarter of 2017, Chart got a substantial one-time tax benefit worth $17.2 million that actually led to the company getting more than $16 million in tax credits for the full year. This artificially boosted the company's GAAP results. Between the big boost in sales and lower operating costs, Chart's operating income was substantially higher in the quarter, as were earnings before income tax.

The reduction in operating expenses in the fourth quarter is particularly notable, and management said on the earnings call that the sales, general, and administrative -- SG&A -- portion of that expense continues to improve.

Here's a look at the full year:

Because of a litany of non-recurring items, many of which were non-cash, the best part of Chart's strong quarter and year -- its cash flows -- aren't visible in the numbers above. Chart generated $55.4 million in cash from operations in the fourth quarter, up almost 90% from last year. Full-year operating cash flow was $119 million, a huge 167% increase year over year.

Strong demand setting Chart up for a big 2019

2019 is on track to be a great year for Chart. Between the addition of VRV Group to bolster its sales and strong demand for products from its existing core business, management slightly raised its full-year guidance from its initial estimates. The expectation is for sales between $1.26 billion and $1.31 billion, 17% to 22% higher than 2018, with 7% to 9% of that expected to be organic growth.

On the bottom line, Chart is looking for $2.50 to $2.80 per share, excluding any additional restructuring or potential acquisition expenses.

Here's the kicker: The estimates above exclude any potential sales for large LNG projects, of which management has identified as much as $500 million in legitimate potential orders that it could win during the course of the year. That's a lot of upside business that's not factored into guidance.

Lastly, it will spend as much as $40 million on capital expenditures, including possibly building an LNG fuel systems production line in Europe, where LNG as a transportation fuel is seeing accelerated adoption.

Put it all together, and Chart looks to have shifted from turnaround to full-on profit growth right as demand for its products picks up.