Failing to meet analysts' estimates of a $0.06 loss per share, Plug Power (NASDAQ:PLUG), a leader in fuel cells, reported a loss of $0.08 per share for Q4 2018. In all likelihood, investors found the company's inability to meet analysts' expectations far less of a bitter pill to swallow when considering that the company reported positive adjusted EBITDA for the first time in its history. Let's look at the company's record-setting performance and several other important details about the quarter.

1. The start of something positive

Citing "technical leadership and continued new product deployment" in its letter to shareholders, Plug Power generated positive adjusted EBITDA -- $500,000 -- in a quarter for the first time in the company's history. The achievement in Q4 represents a notable improvement over the negative $7.6 million in adjusted EBITDA that the company reported during the same period in 2017.

Expanding our view, we find that the company's overall performance last year reflects an improvement year over year, as Plug Power reported adjusted EBITDA of negative $17.5 million in 2018, versus negative $32.8 million in 2017. 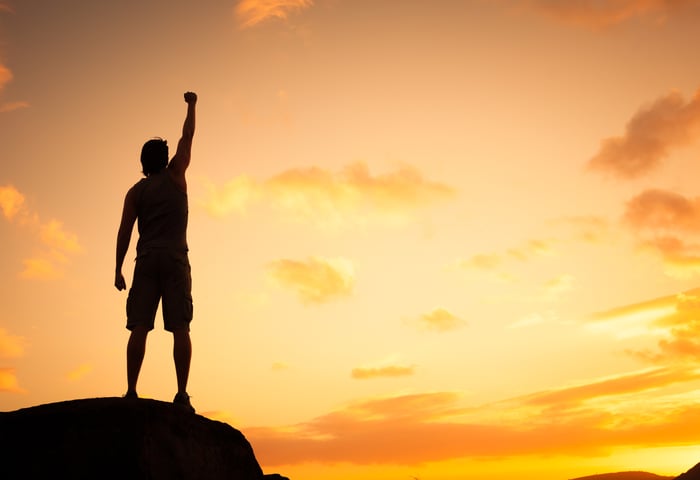 According to management, the company's performance last quarter will not be a one-time event. On the company's conference call, Andy Marsh, Plug Power's CEO, forecast the company would be adjusted-EBITDA positive in 2019 on the strength of its material handling business, which mostly supplies warehouse forklifts with hydrogen fuel cells.

While investors most likely found Plug Power's progress toward profitability its most eye-grabbing accomplishment in the fourth quarter, it doesn't mean that the company's sales growth deserves short shrift. In addition to shipping nearly 1,700 GenDrive units, Plug Power sold three GenFuel refueling sites in Q4. Those were two of the main drivers behind the $59.8 million in quarterly revenue that the company reported, a notable increase over the $31.1 million that the company booked during the same period last year. For the whole year, Plug Power reported revenue of $174.6 million, a 74% increase over the $100.2 million it reported in 2017.

Similar to its auspicious outlook for adjusted EBITDA, management foresees strong sales growth in the year ahead. Citing "continued traction in the material handling market" in its letter to shareholders, management estimates revenue in 2019 will total $235 million to $245 million. The midpoint of this guidance will represent a five-year compound annual growth rate (CAGR) of 30.3%.

This feat becomes even more impressive considering that one of the company's leading fuel cell peers, Ballard Power Systems (NASDAQ:BLDP), recently revealed that it expects sales in 2019 to be flat compared with the $97 million it reported in 2018. Should that come to pass, it will represent a five-year CAGR of only 7.1%.

3. Take the bad with the good

Although there was a lot to celebrate in the company's fourth quarter, it doesn't mean that there weren't concerns, in particular the company's cash flow. Plug Power reported $16 million in cash used from operating activities for Q4, which translated to operating cash flow of negative $57.6 million for 2018. This is an improvement over the negative $60.2 million the company reported for 2017, but it's less impressive considering that revenue grew 74% from 2017 to 2018.

Plug Power's inability to make real headway in generating positive cash flow last year isn't the only thing that warrants attention. In the company's letter to shareholders, there's no mention of an expectation regarding cash flow in 2019. By itself, this may seem inconsequential, but consider that management, in its Q3 letter to shareholders, stated the company was positioned to be cash flow positive in 2019. Since the projection isn't reiterated in the recent letter, it raises the question of whether management has lost confidence that it will be able to do that.

As it did in the third quarter, when it set a company record for adjusted gross profit margin, Plug Power set a high-water mark in the fourth quarter, posting positive adjusted EBITDA.

Before investors reach for the champagne, however, they should remember that these are adjusted figures and not reflective of generally accepted accounting principles, suggesting that a fair degree of skepticism is well warranted.

Likewise, investors should neither dismiss the company's cash outflow from operations in 2018 nor, presumably, in 2019 since it implies that Plug Power will be forced to raise capital through the issuance of debt or equity to keep the lights on in the days ahead.