In late 2014, JetBlue Airways (NASDAQ:JBLU) announced plans to refurbish the interiors of its 130 Airbus (OTC:EADSY) A320 aircraft to add seats and upgrade the inflight experience. This "cabin restyling" effort was scheduled to begin in mid-2016 and wrap up before the end of 2018.

Instead, JetBlue didn't finish its first A320 interior retrofit until last spring. Around the same time, the carrier decided on some design changes, further delaying the project. However, JetBlue recently completed the first restyled aircraft using the new design. The pace of the renovations is now set to accelerate, delivering meaningful financial benefits over the next few years.

A solid upgrade for passengers

JetBlue's Airbus A320s are more than 13 years old on average. Up until now, the interiors have been more or less the same as when the aircraft entered service. For a handful of planes, that was nearly two decades ago.

Some airline pundits have zeroed in on the fact that JetBlue is adding two rows of seating as part of these retrofits, taking the aircraft's capacity from 150 to 162. That does mean rows will be spaced a little more tightly now. However, the introduction of slimline seats will keep legroom roughly the same -- and JetBlue still offers the most legroom in coach of any U.S. airline.

Meanwhile, the rest of the onboard experience has been dramatically improved. To list just a few of the upgrades included:

JetBlue has registered higher net promoter scores, a measure of customer satisfaction, among passengers flying on aircraft retrofitted last year with the first-generation interior upgrades. With the 2019 version of the cabin restyling project offering even bigger upgrades, the net promoter score improvement should be even greater.

Over time, higher net promoter scores may enable JetBlue to gain market share and capture a fare premium. However, the main financial benefit of the ongoing aircraft retrofits will come in the form of lower unit costs, resulting from the addition of the two rows of seats to each Airbus A320. 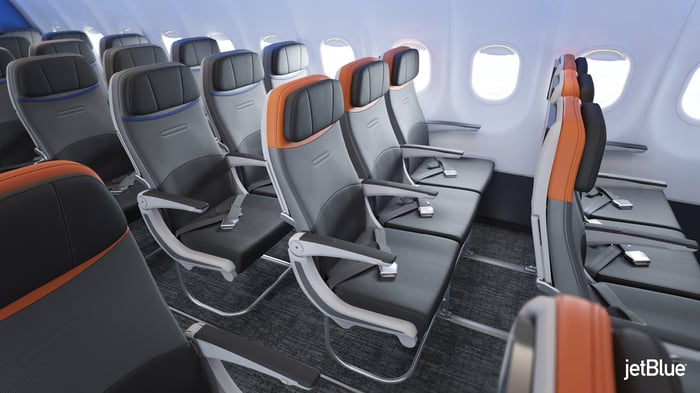 JetBlue is upgrading the interiors and adding seats to its Airbus A320s. Image source: JetBlue Airways.

JetBlue will incur some incremental costs related to the extra seats, as each A320 will now need a fourth flight attendant. However, most expenses -- including pilot labor costs, maintenance, aircraft depreciation, and fuel -- won't change much with the extra seats. As a result, the cabin restyling project will contribute to reducing JetBlue's unit costs.

Last October, JetBlue estimated that cabin restyling, along with the addition of more Airbus A321s and A321neos to the carrier's fleet, would boost earnings per share by $0.10 to $0.15 by 2020. That would be a significant increase on top of JetBlue's 2018 adjusted EPS of $1.55.

Some of this benefit will show up in 2019. However, as of earlier this month, JetBlue had only completed 14 out of 130 A320 retrofits. JetBlue hopes to complete 70 aircraft by the end of this year, with the rest being retrofitted in 2020, but it currently sounds as if the program is running a little behind schedule. This implies that the bulk of the $0.10 to $0.15 EPS gain will be realized in 2020, with additional upside in 2021.

At its 2018 investor day, JetBlue laid out a slew of initiatives that it thinks can boost EPS to a range of $2.50 to $3.00 by next year. The cabin restyling program is just one piece of that profit growth plan.

Wall Street analysts are extremely skeptical of this target. The average analyst EPS estimate for 2020 currently stands at just $2.30, well below the low end of JetBlue's target range. Investors appear to be even more pessimistic. JetBlue stock recently fell below the $16 mark and trades for less than seven times analysts' relatively conservative 2020 earnings estimates.

Of course, an oil price spike, a recession, or an unexpected surge in competitive activity could prevent JetBlue from meeting its earnings targets. However, investors may be underestimating the extent to which JetBlue's "self-help" initiatives -- such as cost cuts, fleet upgrades, route network changes, and the introduction of basic economy fares -- can offset potential external headwinds.

Furthermore, the addition of super-efficient Airbus A220-300 and Airbus A321neo jets to JetBlue's fleet between now and 2025 will drive substantial earnings growth beyond 2020. In short, JetBlue stock already seems priced for a worst-case scenario. If the company delivers anything close to the level of earnings growth management expects, shareholders are likely to achieve huge gains in the next few years.