Please ensure Javascript is enabled for purposes of website accessibility
Log In Help Join The Motley Fool
Free Article Join Over 1 Million Premium Members And Get More In-Depth Stock Guidance and Research
By Todd Campbell – Apr 4, 2019 at 9:17AM

A ranking of the top marijuana growers by sales in the most recent quarter.

Following the opening of Canada's recreational adult-use marijuana market last October, top marijuana stocks could capture billions of dollars in sales as consumers shift their spending from the black market to licensed marijuana retailers. The potential to profit from pot is sparking a green rush of investment that has some marijuana growers already benefiting more than others. 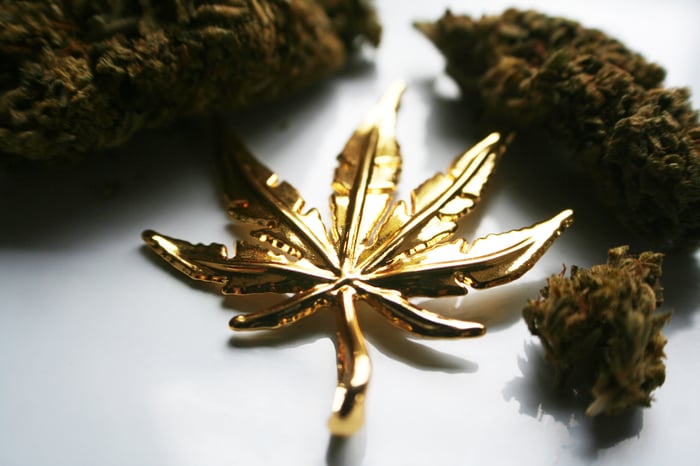 Canopy Growth was already Canada's biggest pot company prior to the start of recreational market sales, with over 30% medical cannabis market share. It boasts 83,400 active medical marijuana users as customers as of Dec. 31, which is more than any other marijuana provider. So far, it's been able to successfully leverage its platform to carve out a similar market share in the recreational market. Adult-use sales accounted for CA$58 million of its CA$83 million in net fourth-quarter sales after excise taxes, and overall, Canopy Growth sold over 10,000 kilograms and kilogram equivalents of marijuana last quarter, which was 44% more marijuana than its next-biggest competitor, Aurora Cannabis.

Aurora Cannabis wasn't a slouch in Q4, though. Its aggressive M&A strategy, including the acquisitions of CanniMed and MedReleaf in 2018, allowed it to deliver the second-highest year-over-year revenue growth of these top cannabis companies. Its medical marijuana customer count totaled over 73,000 in December, and its net sales were CA$54.2 million in the fourth quarter, including CA$21.6 million in recreational adult-use sales.

Aphria needs to more than double its sales to catch up to Aurora Cannabis, but Aphria's sales pace suggests it has a solid lock on third place.

HEXO posted strong quarterly results in its most recent quarter, however, its fiscal quarter ended Jan. 31. We know what Tilray's sales and CannTrust's sales were in the fourth quarter, but we don't know what their sales were in January. Since Canada's recreational sales were 23% higher in January than they were in October, HEXO's results should be taken with a grain of salt. It's likely Tilray and CannTrust remain handily ahead of it.

The dark horse in this race for marijuana market share is Cronos Group. It ranks last in sales with CA$5.6 million in revenue in its most recent quarter.

Canopy Growth and Aurora Cannabis' peak production should exceed 500,000 kilograms annually, and that gives them an advantage when it comes to targeting new markets like Europe and the United States.

Canopy Growth has about CA$5 billion in cash and securities at its disposal following Constellation Brands acquiring a 38% ownership stake in it last year, and it's beginning to put that money to work. In January, it announced plans to create an industrial park in New York to process hemp following hemp's removal from the U.S. controlled substances list in December.

Aurora Cannabis doesn't yet have a deep-pocketed partner like Canopy does, but it exited December with over CA$200 million in cash and securities. In January, it closed a convertible senior notes offering that yielded $345 million, and on April 3, it filed a shelf offering it can tap for up to $750 million if necessary. Aurora Cannabis also recently teamed up with billionaire investor Nelson Peltz to explore tie-ups that could help its balance sheet and accelerate sales in new markets.

Tilray and HEXO have relationships with Anheuser-Busch InBev and Molson Coors for marijuana beverages, respectively. Those deals didn't include equity investments, but they could still help boost sales at those companies in the future, especially if Canada's regulators approve the sale of marijuana beverages this year as expected.

Interestingly, it's Cronos Group, not Tilray or HEXO, that has the deepest pockets of the three. In December, Altria acquired a 45% ownership stake in Cronos Group, resulting in a $1.8 billion cash infusion. It's unclear how Cronos plans to spend its windfall, but given that it now has the second-largest cash position behind Canopy Growth, it's certainly not out of the running in this race.

3 of the Fastest-Growing Stocks Robinhood Investors Are Buying
356%