It seems that a week doesn't go by without a market commentator predicting the demise of UPS (NYSE:UPS) and FedEx (NYSE:FDX) due to the encroachment of Amazon (NASDAQ:AMZN) on their end markets. However, the reality is that the key question facing the package-delivery giants with regard to e-commerce is not so much about volume growth coming under threat from Amazon, it's about the profitability of the volume growth. In this line of thought, let's take a look at the key questions surrounding the issue for UPS and FedEx.

Let's start by looking at margin performance in the most relevant segments of each company's business. For reference, we'll focus on FedEx's ground segment because the express segment's margin is being significantly impacted by the integration of TNT Express. 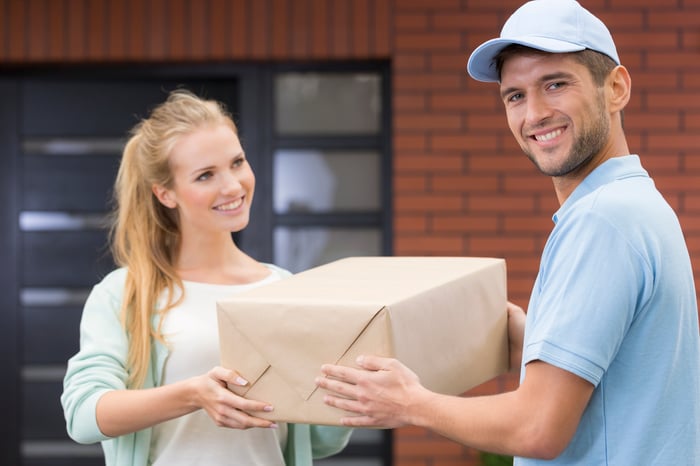 As you can see in the chart below, both companies appear to be suffering ongoing margin decline, with UPS particularly badly affected. This goes a long way toward explaining why FedEx stock has tended to outperform its rival's in the last decade -- FedEx is up 309% in the period versus just 131% for UPS.

In particular, note the disappointing margin performance in UPS's fourth quarters (shown as third quarters in the chart because the figures are adjusted to FedEx's nearest quarter). This is down to the extra difficulty that UPS has had in dealing with peak demand periods during the holiday season in recent years. Partly as a consequence, UPS has had to meaningfully ramp up its capital expenditures -- something that hit the stock hard in February of 2018 -- and there are question marks around its future ability to meet its spending requirements. 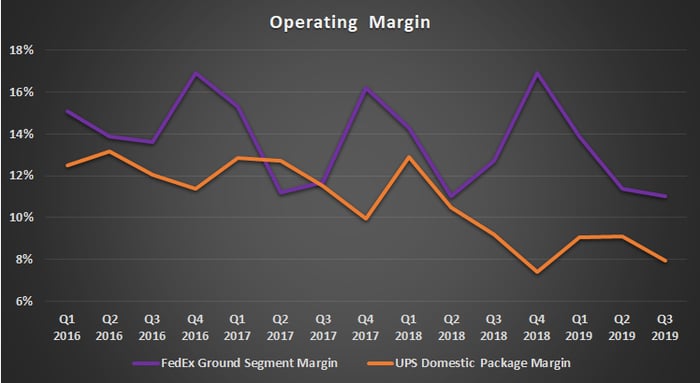 What FedEx and UPS are planning to do about it

As noted above, UPS is ramping its capital expenditures to up to 10% of its revenue in order to modernize and expand its networks with the idea that it will lead to more productive networks in the future. Similarly, FedEx continues to spend a high-single-digit share of its revenue on capital expenditures, and its free-cash-flow generation is also being constrained as a consequence.

In both cases, management is arguing that the spending is needed in order to service growing demand and will lead to margin expansion in the years ahead. That's fair enough, but it means investors are going to have to place a lot of confidence in an event that doesn't have historical precedence.

Simply put, investors in both companies are going to have to be patient in order to see the fruits of the current bout of capital spending. With this in mind, it's useful to keep an eye on yield growth (measured in revenue per package) compared to volume growth (average daily package volume).

The ideal scenario would see volume and yield growth, but given margin pressures, a combination of yield growth and moderating volume might also work toward improving margin too.

The important point to note here with regard to the so-called Amazon threat is that UPS and FedEx continue to report mid-single-digit growth in volume and are expanding their networks to service e-commerce growth. It's not a problem of volume growth per se but rather of ensuring that margin growth accompanies volume growth.

A quick look at the data suggests UPS is currently on a better trend than FedEx. As you can see below, UPS domestic package yield appears to be on an upward trend while its volume growth remains relatively consistent. This implies that if it can deal with cost headwinds (increased transportation costs, etc.), its margin is likely to improve. The trends at FedEx were also moving in the right direction, and volume growth remains strong, but the last few quarters have seen some weakening in yield. 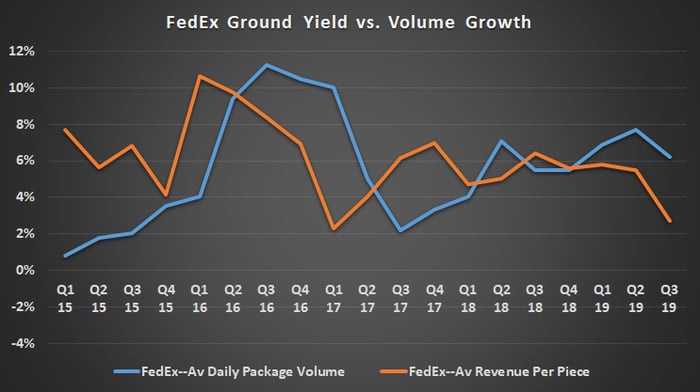 However, FedEx's management isn't perturbed by these events. Speaking on the last earnings call, FedEx's CFO Alan Graf admitted, "we thought we were going to have a higher" yield but then said he wasn't "worried about Ground's margins in the longer-term." He went on to argue that the company's investments would mean ground margin would not "pop back up" in the next quarter.

In other words, it's going to be at least a few quarters before investors can expect to see ground margin bounce back.

All told, UPS looks like it's on the right path with regard to volume and yield, but investors will need to see demonstrable margin improvement before they can feel fully confident in the stock. Meanwhile, FedEx's investors will be hoping that recent weakness in ground margin and yield isn't something that will last.

Unfortunately, it's far from clear with both businesses that e-commerce growth isn't bringing about a structural challenge to their margins. E-commerce is certainly bringing growth prospects to both companies, but investors will want to see margin expansion too.