One of the major contributors to Apple's (NASDAQ:AAPL) growing services business has been Apple Music. The streaming service, which made its debut less than four years ago, has been on a tear, chasing down market-leader Spotify (NYSE:SPOT) ever since.

Both Spotify and Apple Music charge users $9.99 per month to stream and download music. This time last year, Apple Music grew to over 40 million paid subscribers in 115 countries, with another 8 million in the midst of a 30-day free trial, according to a report in Variety. At the same time, the service was generating growth of about 5% per month, outpacing Spotify's 2%, and some predicted Apple's U.S. subscriber count would overtake its Swedish rival as early as last summer.

Now it seems the inevitable may finally have come to pass. 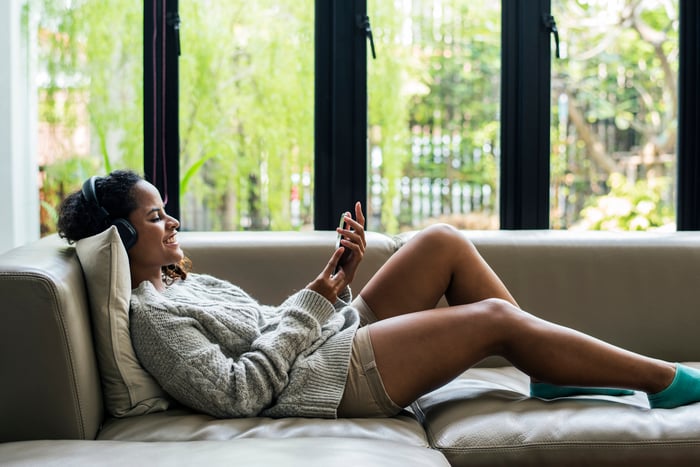 While many expected Apple to surpass its rival last summer, Spotify kept the Cupertino company at bay for a time with a series of promotions and discounts that temporarily boosted its subscriber growth. Spotify also offered a discounted bundle in partnership with video streaming provider Hulu, which is controlled by Disney.

But Apple Music has finally surpassed Spotify in paid U.S. subscriptions, according to The Wall Street Journal. The iPhone maker reportedly had more than 28 million U.S. subscribers to its streaming-music service in February, compared to 26 million for Spotify. It's important to note that neither company breaks out their paying customers by geography, and the numbers haven't been independently verified. Spotify also has a free ad-supported service, which increases its total subscriber base.

Apple is currently adding subscribers in the U.S. -- the world's largest music streaming market -- at a faster pace than Spotify, producing a monthly rate of between 2.6% and 3%, compared to Spotify's 1.5% to 2% clip.

Spotify still maintains bragging rights for its worldwide subscriber base, which tops out at 207 million active users. Of those, 96 million are paying customers, while the remainder use the free, ad-supported option. For its part, Apple boasts 50 million paid subscribers and doesn't offer a free tier.

On the global stage, Apple is still growing faster, in a range of 2.4% to 2.8% per month, outpacing Spotify's 2% to 2.3% rate. This growth is paying dividends. During the company's first-quarter conference call in January, CEO Tim Cook said Apple generated its "highest quarterly music revenue ever."

A growing emphasis on services

Apple recently introduced several new services in an effort to boost its revenue and subscription-based presence. The company recently launched Apple News+, its subscription news app, headlined by The Wall Street Journal and Los Angeles Times. It provides users access to over 300 magazines and digital publications for $9.95 per month. The service will eventually be rolled out worldwide.

Three other services will debut in the coming months. Apple Arcade will offer a host of free-to-play mobile games for a monthly fee, the Apple Card will be a logical credit card extension of Apple Pay, and Apple TV+ is a streaming video service designed to rival Netflix and Amazon Prime Video. It's possible that the company may bundle its subscription services to ultimately rival other successful subscription-based conglomerates like Amazon Prime.

It's no secret Apple has been putting greater emphasis on its services due to the stalling growth of its iPhone. In the company's most recent quarter, revenue declined by 5%, or 3% adjusted for changes in exchange rates.

What caused the downfall? iPhone sales plummeted 15% year over year, while services revenue climbed by 19%. The money Apple makes from the App Store, Apple Pay, Apple Music, and other services still represents a much smaller piece of the pie, accounting for just 14% of Apple's revenue in 2018. But the growth potential remains untold.

With the ongoing adoption of Apple Music and a host of new services coming on board, the day will likely come when revenue from this segment ultimately surpasses that of Apple's flagship iPhone.