People can get complacent in their jobs. You may like the work and be very good at it but fall into a rut in which you perform well enough but aren't advancing your career.

Sometimes that's a good thing -- if you have young kids or nonwork priorities, having a job you can do well easily can be a blessing. In other scenarios, you can end up with a stalled career when you didn't mean to. That can be fixed if you're willing to put the work in. 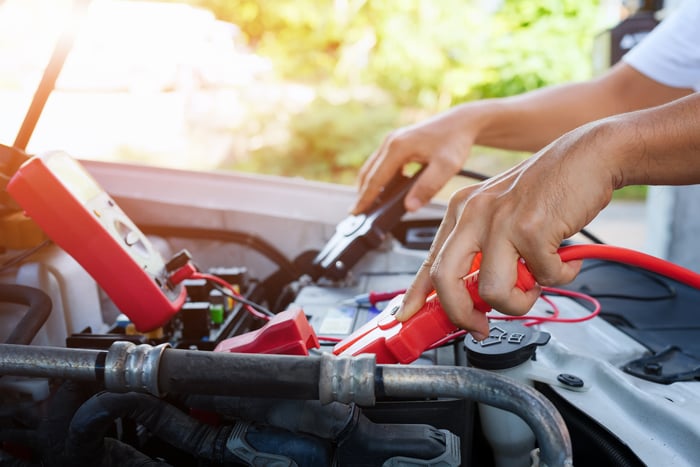 Sometimes it takes a jolt to get your career out of a rut. Image source: Getty Images.

If you've been doing the same thing for a long time without asking for a promotion or even a change in responsibilities, your boss may think you're content and don't want to take on anything else. It's important to schedule a meeting and explain what you're hoping for.

Make it clear that you're talking about longer-range and not immediate change. Go in with some ideas as to what you would like to see happen and listen to what your boss has to say. Don't expect results right away, but get the ball rolling and maybe set up quarterly check-ins to keep the issue alive.

In addition to asking for a promotion or a new job, it's important to demonstrate why you're a good fit. Your boss may not know all the other things you can do beyond the position you currently fill.

You can do this by volunteering to help out in other areas or asking to be part of a new initiative. Most offices have plenty of available work. Take on some extra projects as a way to show that you're more than just whatever your boss perceives you to be.

3. Be open and eager

Perhaps the best way to get people interested in helping you further your career is to have a good attitude. Be willing to take on any task and do whatever is needed.

This isn't about opening yourself up to be taken advantage of. It's a chance to work with new people, tackle different things, and show that you're not just a good worker, you're also a pleasant person. Sometimes that means offering a helping hand to a colleague who needs it, and at others, it means being the person who says yes when everyone else has said no.

If people see you a certain way, they are not going to change their perception quickly. You have to put in the time to show that you deserve a promotion or inclusion on different/more interesting projects.

Be patient; you're just kicking off a long-term plan. Don't focus as much on the end goal as you do on all of the steps along the way. Just shaking up your workday a little bit and trying some new things, even in a small way, can be energizing.

Be prepared for the possibility that not everything will go your way. Sometimes you can do everything right, and your boss still won't choose to notice. If that happens, it's OK, and you've learned that it might be time to take your talents elsewhere. Don't make that decision quickly, but be open to a change if that's what it takes to jump-start your career.