Specialty retailer Tile Shop Holdings, Inc. (OTC:TTSH) reported first-quarter earnings on April 30, and the results were sorely disappointing for many investors. The company's shares lost almost 16% of their value by the end of the day.

But even as the company struggled with weak traffic, which led to a 4.6% decline in revenues, cash flow and margin improved even as net income fell. Let's take a closer look at Tile Shop's results, as well as what management had to say. 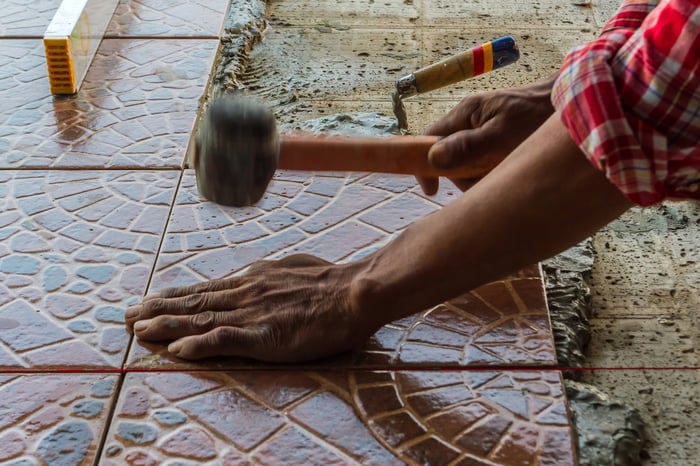 A closer look at some key metrics

Beyond the decline in sales and sharp drop in earnings, the number that stands out most was comparable sales, or comps, which measure sales at stores open more than one year. By this measure, Tile Shop had a particularly ugly quarter, with a 4.2% decline.

This was especially bad when compared to the fourth quarter of 2018, when the company saw comps surge upwards by 5%. Moreover, Tile Shop's third quarter of 2018 wasn't particularly good: As the table above shows, comps fell 1.1% last year, meaning comparable sales in the first quarter of 2019 were actually below 2017 levels.

Excuses or reasons: Here's what management said about sales and traffic

On the earnings call, CEO Cabby Lolmaugh offered three reasons why traffic was down in the quarter: problems with its new ERP (enterprise resource planning) system that was rolled out early in the quarter, weather challenges in the Northeast and Midwest, and reduced marketing spending in the quarter. While it's common to hear management blame weather when results fail to meet expectations, Lolmaugh offered up some evidence to help support this idea:

The past few quarters, our performance nationwide was fairly consistent. This was not the case in the first quarter. In fact, our Southern store markets generally delivered positive comp sales growth with many in the double-digit positive range, while our Midwest and Northeast store markets generally delivered negative comp sales growth during the quarter.

Another important data point is that our open sales order balance at the end of March was approximately 20% higher than last year. ... Many of our pro customers simply hadn't been ready to pick up their orders yet due to project delays caused by unseasonal weather. If our open order balance would have been more in line with normal levels at the end of March, we would have ended up much closer to our estimated sales range for the first quarter.

Moreover, management also said that after struggling with its POS system early in the quarter, once those issues were resolved and order times improved, traffic and sales steadily increased later in the quarter.

Despite the headwinds to traffic and sales in the quarter, Tile Shop made some progress that could pay off going forward. The company completed its merchandising upgrades in all of its existing stores and completed the rollout of its new ERP system -- and corrected the point-of-sale problems that resulted -- early in the quarter.

Looking ahead, the company continues to prioritize professional customers and retail customers looking for higher-end products. CFO Kirk Geadelmann said that large- and mid-sized tile projects generated 70% of sales and 85% of profits for the entire industry, and this was the "sweet spot" Tile Shop was focused on.

Management also said that it still has a long-term goal of mid-single-digit comps growth and anticipates that the steps the company has taken to refocus upmarket will deliver those results. And while improved margins are nice and offer some reason to be hopeful, at this point, investors are likely getting impatient for Tile Shop's pivot to start paying off.