Advanced Micro Devices (NASDAQ:AMD) and NVIDIA (NASDAQ:NVDA) have witnessed wildly different fortunes on the stock market this year. There was a time when both stocks were flying high thanks to the cryptocurrency-driven boom. But after that bubble burst last year, AMD has emerged as the stronger performer while NVIDIA has failed to recover. 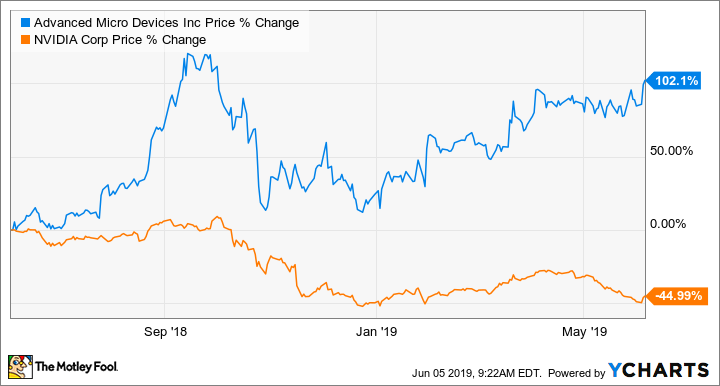 It won't be surprising to see AMD stock sustain its terrific momentum and outperform NVIDIA, as the former enjoys one big advantage over its archrival. Graphics cards are proving to be NVIDIA's Achilles' heel

But shrinking graphics card sales meant that the higher market share didn't do much for NVIDIA's financial growth. The company's fiscal first-quarter 2020 revenue fell close to 31% year over year as sales in the gaming segment were down nearly 39%. Gaming is NVIDIA's bread and butter, accounting for 47% of total revenue.

Meanwhile, NVIDIA's revenue from the "OEM and other" segment, which includes sales of GPUs for cryptocurrency mining, plunged nearly 75% annually to $99 million in the first quarter. As graphics card demand fell off a cliff after the cryptocurrency mining wave died down, the likes of NVIDIA and AMD were left with excessive channel inventory that led to lower GPU pricing.

Given NVIDIA's reliance on GPUs for the majority of its revenue, it is still reeling under the impact of an oversupplied graphics card market. AMD, however, has been able to make up for the graphics card weakness thanks to its CPU (central processing unit) business.

AMD's CPU gains have been a tailwind

Slowly but surely, AMD has been eating into CPU behemoth Intel's market share. AMD reportedly held 17% of the PC CPU market at the end of the first quarter, according to Mercury Research, up from 12% in the prior-year period. Intel holds the remaining share.

AMD's market share jump isn't surprising, as its CPUs have been selling much faster than Intel's. Looking ahead, AMD can further dent Intel's position thanks to the refreshed lineup of Ryzen chips that will hit the market next month.

AMD claims that its new Ryzen chips will deliver substantially better performance than their Intel counterparts at a much lower price. That's because the new Ryzen chips are based on a 7-nanometer manufacturing process, while Intel has now pushed back the release of its competing 10 nm CPUs to 2021.

As a result, AMD has now taken a manufacturing lead over Intel in desktop CPUs for the first time in 50 years, setting the stage for more market share gains that should enable it to stage a quick turnaround.

AMD's revenue fell 23% year over year in the first quarter as weak demand for graphics cards knocked the wind out of its sales. This was a steep drop, but it was lower than the pace at which NVIDIA's revenue dropped last quarter.

More importantly, AMD is still a small player in CPUs and this means that AMD has a lot of room to grow its revenue on the back of more market share gains.

NVIDIA, on the other hand, is lacking on this front. It primarily deals in GPUs, and that market hasn't been in great shape. In the end, betting on AMD instead of NVIDIA makes more sense, as AMD can fall back on a secondary stream of revenue if the GPU market doesn't recover.