With the e-commerce retailer's biggest annual sale looming, the company is pulling out all the stops to make it the biggest Prime event ever -- and investors will ultimately benefit.

Less than two weeks ago, Amazon.com (AMZN 0.27%) announced the dates and some details about its fifth annual Prime Day sale, which will run 48 hours this year beginning at 12 a.m. PDT on Monday, July 15. The event, which is accessible to Prime subscribers (or those on a trial membership), was originally billed as Black Friday in July. It first appeared in 2015 to celebrate the e-tailer's 20th anniversary but has since become the biggest event of the year for Amazon, surpassing the sales it generates on both Black Friday and Cyber Monday.

Amazon has pulled the curtain back further to reveal some high-profile stars that will be pitching in to make this the company's biggest Prime Day ever. 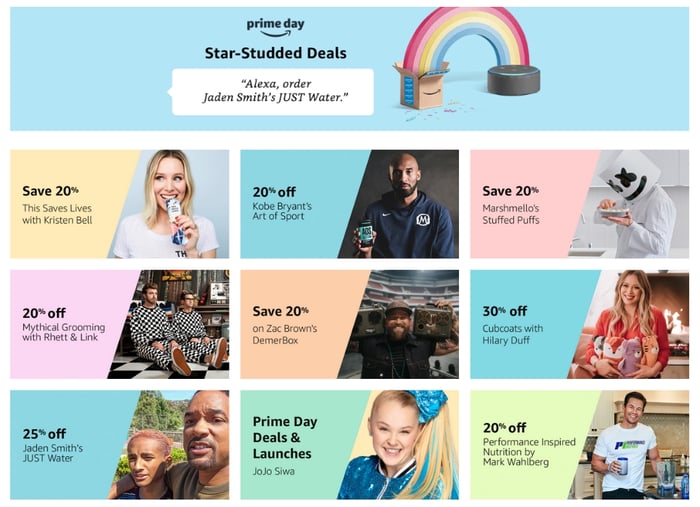 The stars come out

Earlier this week, Amazon said it would collaborate with "popular actors, musicians and artists to introduce new and exclusive products to members and deliver outstanding deals."

Pop and country music singer Taylor Swift will be headlining the Prime Day concert that will take place at an as-yet-undisclosed location in New York. Swift will be singing her latest singles "ME!" and "You Need To Calm Down." No tickets will be sold for the event, but select Prime members will be invited to attend. The show will be hosted by Jane Lynch and include performances by Dua Lipa, SZA, and Becky G. The concert will be live-streamed on Amazon Prime Video at 9 p.m. EDT on Wednesday, July 10.

Here are a few other star-studded deals that have been arranged for Prime Day:

Many of the performers also appear in a video message that was made especially to promote their participation, with many boasting Prime memberships.

More than just a sale

Amazon has worked to make each Prime Day event bigger than the last. The company increased the amount of star power it's using this year to bring attention to what has become its biggest sale of the year. Amazon noted last year that small- and medium-sized businesses selling on the platform "far exceeded $1 billion in sales this Prime Day," and the company sold more than 100 million products.

While Amazon doesn't release specific details regarding its annual event, Internet Retailer estimated that in 2018, the sale nabbed between $4.01 billion and $4.38 billion globally -- or nearly 2% of the retailer's sales for the entire year.

This year's event promises to be even bigger.